Today I came across a link on facebook about a Marine wife battling to get her husband help for post-traumatic stress disorder.  The article talks about how Ashley Wise had tried to get help from within the army first, going to the Army’s Family Advocacy program when her husband took all his weapons and some alcohol to a local hotel and told his wife that he might do something stupid. The military police promptly arrested her husband and he was charged with domestic assault and threatened with a dishonorable discharge. So she wrote a pledge on her back, took a picture of it, and started a facebook campaign that’s been joined by military wives throughout the country.

As I was reading the article I was alternately cringing and cheering. It’s a well-known fact that our government does not take very good care of its soldiers or their families. They get the bare minimum they need to survive, and sometimes not even that, as compensation for risking their lives to serve our country.

At the same time, though, the facts reported in the story were sparse. And even though it seemed cruel and unfeeling, I can’t see that the Advocacy program had any choice but to report a soldier holed up drinking with a bunch of weapons, clearly not in a healthy state of mind. Marines are highly trained individuals. They are very good at what they do. A Marine suffering from post-traumatic stress disorder, armed and drinking alone, is a dangerous person.

Then again, dishonorably discharging a soldier for suffering from mental anguish as a result of combat is unconscionable. It’s almost like dishonorably discharging a soldier who lost his legs in battle because he can’t walk anymore. Obviously, the Marine Corps has a duty to help men suffering from post-traumatic stress disorder…but I’m not a Marine wife, and I have no idea what stigma trying to get help for such a thing carries, nor what rules and regulations were violated in this case.

So while I was genuinely moved to read a story of a wife fighting for her husband, I was also wary of the sloppy reporting, the holes in the story, and the overall lack of detail. When the story started talking about Ashley Wise’s facebook campaign, I was really on my guard. In my experience, most facebook campaigns begin and end with hatred. Additionally, there’s a tacit encouragement in our cultural climate to “support the soldiers, not the war”, by which many people mean, “demonize the government and the Army/Navy/Air Force/Marine bureaucracy for destroying the mental health and well-being of American soldiers with their insatiable blood-lust”. One of the problems with this is that most of the chain of command is made up of American soldiers, and plenty of soldiers and their families agree with the various wars and don’t feel supported at all when the media and the pundits denounce military actions and then rush to add, “but we support our troops, of course.” I was bracing myself for a message stirring up bitterness against the institution her husband had given so much for.

I was shocked when I saw this:

This image is a more powerful portrayal of the marital union than anything I’ve seen come out of our culture. The words themselves are straight out of traditional marital vows. In sickness and in health. Till death do us part. And she wrote them on her bare back, the unclothed body that belongs to her husband alone. It’s strikingly vulnerable, and her pose, the universally recognized position of surrender, places the whole thing in an obvious military context. She’s giving herself up, not to defeat, but to the consumption of the masses. She’s offering up her own love and devotion to her husband, exposed on the flesh that he alone is familiar with.

But then there’s her husband’s machine gun and his patrol cap. The contrast between the inherent violence of those two objects and the inherent vulnerability of her unclothed feminine figure is an extremely powerful part of the image. It took me a while to figure out why, though, and I’m still not certain that I’ve figured out exactly what that juxtaposition conveys. To me, it says a few things. It says that as husband and wife, as one flesh, she carries the violence of war as well. It’s as much a part of her life as she watches him struggle to come to grips with it, as she desperately tries to find ways to help him, as it is his. The fact that she’s the one holding the gun and wearing his cap also shows her determination to fight for him, to shoulder the load that he can’t, to take up arms to protect him just as he took up arms to protect our country. But it’s more than that. It’s a way of showing us that underneath the fatigues and the guns, soldiers are human beings. Vulnerable human beings.

I don’t often think of soldiers as vulnerable. In fact, I see them as the opposite — the impenetrably solid wall that protects us, the vulnerable. Soldiers aren’t supposed to be vulnerable. On the field of battle, they can’t afford to show vulnerability…and yet aren’t they at their most vulnerable then? They go into a battle knowing that they are opening themselves up to death. Knowing that, in fact, they are vulnerable…vulnerable to bullets, to bombs, to barbed wire and tanks. Knowing that they must go forward in spite of that fact, that they must face their own vulnerability and overcome it in a way that I will never be forced to endure.

And when they come home, what are they supposed to do with it all? Leave it on the field? Slip easily back into everyday life, pretend it never happened, or at the very least bottle it up so that no one has to see or hear about it? Stand idly by with their mouths shut while civilians loudly proclaim what is right and wrong in war, and who is right and wrong, civilians who have never had to make excruciating choices of life and death in the midst of chaos and blood and smoke and bombs? Somehow be grateful that when someone tosses off a half-hearted, “oh, but we support the troops, of course” after a tirade about the injustice and evil of warfare?

No one really wants to hear about soldiers and post-traumatic stress disorder, regardless of how much the subject can get bandied about in the political sphere to advance someone’s argument. People want it not to be true, that our soldiers suffer greatly to protect us. People don’t want to have to face that reality. People like to think of them as cogs in the machine that keeps us safe. Marching in line, indistinguishable from each other in their uniforms, doing their jobs effectively and efficiently. Certainly not vulnerable.

But their wives don’t see them that way. And these women wanted to show the world what they know to be true…that their husbands are vulnerable, that they have been wounded, that they need love and support like everyone else. Probably more than everyone else. So they did it the best way they could…they made themselves vulnerable to the world. They showed us an intimate vision of themselves and their husbands. Not just flesh, but pain, suffering, love and loyalty.

It’s astounding how much power is in that simple vow of love, written on a woman’s naked back. This could have been a nasty, resentful, and easily-dismissed stunt, but she chose courage, prudence, and unshakeable loyalty– unsurprisingly, the virtues of a good soldier. The truth she’s speaking and the goodness with which she’s speaking it makes hers a rare act of beauty in today’s world.

July 2, 2012 Others Like Him
Recent Comments
0 | Leave a Comment
Browse Our Archives
get the latest from
Barefoot and Pregnant
Sign up for our newsletter
POPULAR AT PATHEOS Catholic
1

Yes, It's About the White Supremacy
suspended in her jar
Related posts from Barefoot and Pregnant 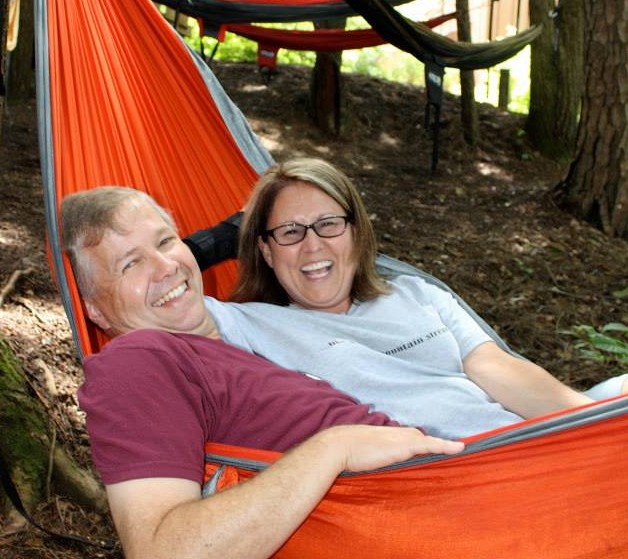 Catholic
Why an Ill-Timed Virus Reminded Me That My...
Barefoot and Pregnant

Catholic
How to Be a Good Wife When You...
Barefoot and Pregnant
TRENDING AT PATHEOS Catholic