Kyphi Incense: Things That Delight in the Night 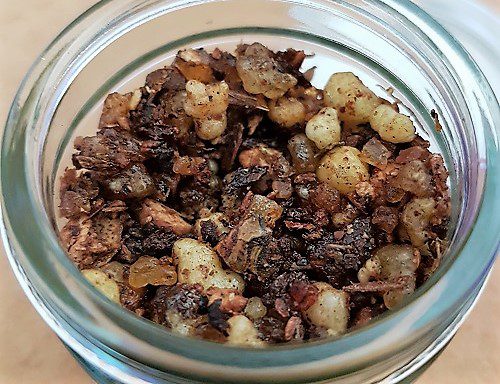 I recently discovered a pot of kyphi incense in Glastonbury in the delightful shop Starchild.  I had heard about kyphi before but had never used it.  It has the most amazing scent!  It smells sweet, earthy and provocative.

Kyphi (kapet) is an ancient Egyptian incense blend burnt for use in ritual, healing and within the home.  It was believed to be made from ‘things that delight in the night’.  Although recipes for a similar incense were also created in ancient Greece.

The Egyptian word kapet is believed to originally mean a substance that was used to clean and scent the air.

References to kyphi were made in some of the ancient pyramid texts. Often as one of the luxury items that a well to do Pharaoh could hope to find in the afterlife.

A lot of the earlier texts although referring to this incense don’t give any recipes.  Later papyrus writings include the ingredients, the earliest being around 1500BC.

Writings during the time of Ramesses III include ingredients that were donated to the temples with the specific purpose of creating kyphi.

During the first century BC Plutarch visited Egypt and he describes the method of making this special incense telling us that the ingredients were added one at a time as magical words were read out loud.   He also suggests that kyphi was used as a drink to cleanse the body.   The incense being specifically burnt at dusk each day in the temples.

Rufus of Ehpesus included a recipe  in his writings circa 50AD.

Circa 100AD Dioscorides wrote ‘De Materia Medici’ which contained a recipe for kyphi and recommended it be used as incense to purify temples and taken as a drink.

A lot of the recipes seem to include raisins, wine and honey with a resin such as frankincense, myrrh and mastic. Adding in pine, grasses and often cinnamon, some also include; mint, sweet flag, inektun, bitumen of Judea, cyperus, aspalathos, seseli, rush, lanathos, cardamom, peker and juniper berries.  Some of the ingredients could be sourced locally however others would have had to be imported.

Later recipes can be found in Greece however they use less ingredients and are created in a much simpler fashion.

Preparation seems to vary although essentially the resins, grasses and spices are ground together and any liquid drained off.  Berries and kernels are ground to a fine powder and added in.  A little wine is added to the combined mixture and left overnight.  Raisins are soaked in wine and added, the mixture is then left for another five days.  The complete mixture is then boiled until it has reduced considerably. Honey and frankincense are also boiled together until reduced then both mixtures are combined with myrrh then being added.

Simpler recipes mash the raisins, berries and wine together with the dry ingredients being ground together and mixed with honey then the mixture is combined.

It does seem quite a long winded process to create but if you fancy the challenge there are plenty of recipes and methods on the internet, just google it.  I haven’t included a specific recipe here because I haven’t made it myself, however if anyone finds a good recipe that works I would love to hear about it!

Kyphi is a truly beautiful scent and can be used to purify and cleanse.  It also works well for all kinds of ritual and as offerings to night deities and helps bring prophetic dreams. 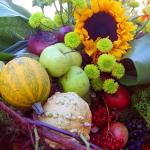 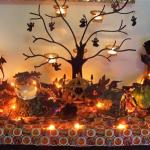 September 26, 2017 Moon Magic: Samhain & October, When the Gopher Looks Back…
Recent Comments
0 | Leave a Comment
Browse Our Archives
get the latest from
Beneath the Moon
Sign up for our newsletter
POPULAR AT PATHEOS Pagan
1 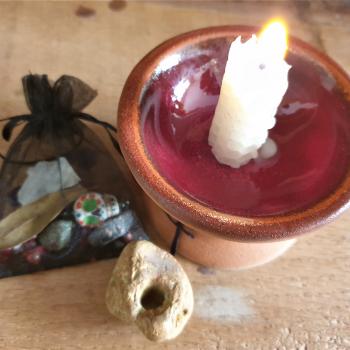 Pagan
Working with Protection Magic
Beneath the Moon 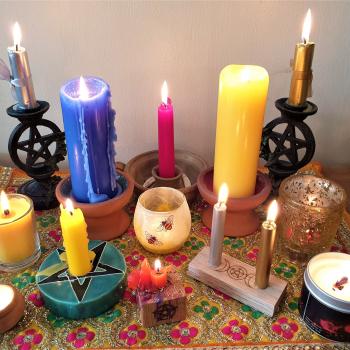 Pagan
The Basics: Candle Magic
Beneath the Moon 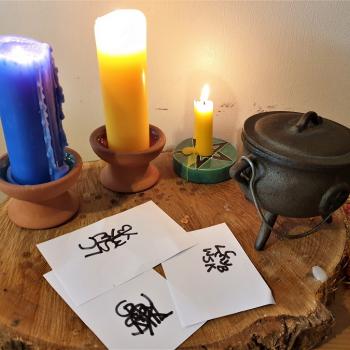 Review: Crescent City Conjure Comprehensive Guide
There are only a handful of practitioners who I wholeheartedly recommend their...
view all Pagan blogs
What Are Your Thoughts?leave a comment
Copyright 2008-2020, Patheos. All rights reserved.