Teaching Seminary with Cuneiform, Shortbread, and The Shining

Back in fall, I got interviewed about teaching early-morning Seminary. I even attended one morning, to get the lay of the land. I got very excited about shaping young minds, but I was also up front that they would probably hear from some parents. As long as they were fine with that, I was on board. I’d heard that they’d called someone else, but then a few weeks ago, received the formal call.  A friend (jokingly?) said, “I’m frankly kind of shocked they allow you to do this.”

I only teach Wednesdays, which means Wednesdays Are Different™. Yesterday was my third lesson, covering 1-2 Chronicles. Here’s what we did.

Importance of keeping up with the story
“You’ve finished your homework, and open up Netflix. You’re into Season 4, episode 14, and halfway through the episode, your mom comes in.

…Who’s that? Why’s she doing that? Where is she? Who is that guy? I don’t understand what’s going on.

That far in, it’s hard to explain, right? You’ve just got to keep up with the story, if it’s going to make sense. The Old Testament is not too different, you’ve got to keep up; it’s a lot like Lord of the Rings, in the sense that there are lots of characters, lots of places, and multiple simultaneous storylines. Lots to keep track of.

So let’s review the story so far.”

Here I ran through an outline of the chronology of the Old Testament using this handout of mine, the “Historical Framework.” Since they’d just covered Samuel-Kings in the previous weeks, with Saul, David, Solomon, and the northern and southern kingdom, I focused on the United Kingdom, Divided Kingdom, and the AB down to the Exile. On the left side on the board, I had written down Samuel/Kings events. On the right side, I’d written in some of the prophetic books that happen at the same time as the events of Samuel/Kings, like Isaiah, Amos, Jeremiah, as well as Assyria, and Babylon below that, giving us a nice large A, B.

“What happens after the Exile?” Crickets. As planned.

“Ok, in order to answer that question, break up into two groups, around two tables.” I turned on the Indiana Jones theme.

“Ok, you’re all archaeologists now. You’ve just discovered two tablets, broken up and hard to read, like most tablets. Take five minutes, and try to reassemble these tablets. Once they’re together, try to sketch out the signs written on them.”

I handed each table a cookie sheet with a broken-up citrus shortbread tablet. (Pics edited for privacy reasons.)

“Be careful! Tablets are fragile, and if you break it, we’ll never know what was written!” 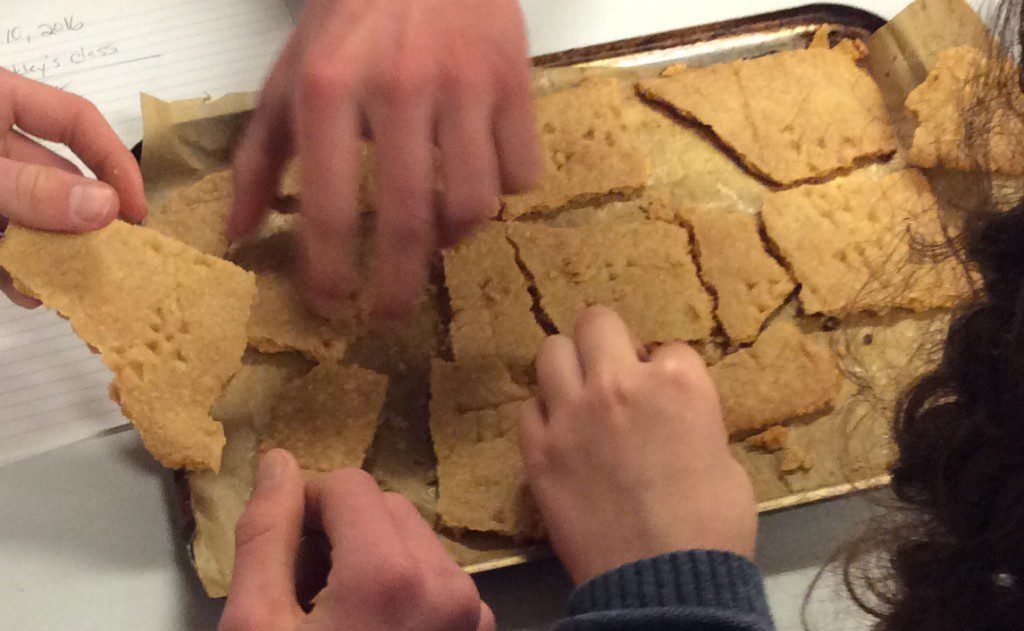 One group successfully assembled their tablet, and even got some signs copied. Here, the scribe dutifully examines the tablet before careful copying…

“What is this you’ve just put together? It’s Akkadian, the language of Assyria and Babylon. What you’ve just assembled is part of a royal decree by Cyrus the Persian, called the Cyrus Cylinder. You can go see the original in the British Museum in London.”

Under  Assyria and Babylon, I write Cyrus, so we have an aide-mémoire for the history, ABC.

After the Jews are in Babylon 50-odd years, Cyrus the Persian shows up around the year 530, conquers Babylon, and declares that all the peoples the Babylonians captured can go home. Moreover, here’s money from the royal treasury to rebuild your temple, he says. That last part is from the Hebrew Bible, not the Cyrus Cylinder. Some drama around that is recorded in Ezra and Nehemiah.

“So now that the Jews are back from the Exile, the next books are all about that right? Well, actually not. Chronicles is the next book**, and what do we find there? It starts over, with Adam. And it retells all the same stories about Saul, David, Solomon, and the divided kingdom we’ve just read. Why tell them again, if we’ve just read them all? To answer that question, I want to put this word on the board (“historiography”) aaand… let’s watch these.”

I then ran these three “trailers” on a nice big TV.

“Ok, which one of those would you take your 8-yr old sister to? (The Shining, obviously.) Are Frozen or Mary Poppins horror movies? (No.) Is The Shining a family-friendly flick? (Not really) How did they make them into horror movies, and The Shining happy?”

Answers included: what they left out, what they put in. how they put it together, the order of scenes, the jump cuts. The “framing” with music and voiceover.

“Ok, so an editor can take material, and recut it in a different way to communicate something different… and this is exactly what Chronicles does. The stories are not the same as in Samuel/Kings, because the editor of Chronicles has chosen to leave some things out, include others, and frame it differently. This, roughly, is historiography, studying how the history is written and told. ” (We didn’t have time to look at any of my examples comparing Chronicles with Samuel.)

“Now note, the message being communicated here is not being explicitly stated in a verse or a chapter. It’s not a line or a phrase you can memorize.  The message being communicated is several levels above that. You have to compare the two, Frozen Recut to the original Frozen, to see what’s being changed, in order to figure out what the director is trying to do and say.

This kind of thing happens in the New Testament too, with the four Gospels.” (I used the example of John changing the chronology of  Matt/Mark/Luke, e.g. in the Synoptics, the last supper is the Passover, which is transformed into the Christian sacrament/eucharist. But in John, the last supper is the night before Passover, so that Jesus is crucified at the same time the passover lamb is slaughtered. What message is John communicating by changing the chronology this way? Jesus is the passover lamb.) It also happens in the Book of Mormon once, when Mormon tells the same story twice, differently.

So even something as “repetitive” as Chronicles has something to teach us, as long as we understand how to “read” that repetition.

Closed with excitement and testimony of the Old Testament.

This seemed to go over well.

* Kuraš is koreš in Hebrew… like David Koresh of Waco infamy, whose real name was  Vernon Wayne Howell. He christened himself after the uniter of Israel (David) and the messiah of the Exile (Cyrus/Kuraš/Koreš).

** Chronicles only follows Samuel/Kings in the Septuagint and Christian canon. In the Hebrew canon, it’s the last book. This different book order actually makes a difference in how we understand it. See this article, “Spinning the Bible”

For making your own tablets, see here and here. It takes a while. I prefer the shortbread over the gingerbread, because it looks more like a clay tablet.

Now, a lesson in scribal errors. If you look closely at the top line of what I’m copying and the top line of tablet 2 below, you’ll notice that the same sign repeats twice, close together. This is the ku sign, in a-na-ku Iku-ra-aš (the I tells you “the following thing is the proper name of a human.”) As the scribe’s eye goes back and forth from original to copy, it’s possible to get confused when there are repetitions, like –ku. In copying tablet 2, after copying the first -ku, I went back to the second ku. This means that instead of a-na-ku Iku-ra-aš, my top line actually reads a na ku ra aš,  or anaku raš, which is either grammatically nonsensical or could be a misspelled version of “I am (the) head.” This is called homeoteleuton (see here, under “scribal error.”) 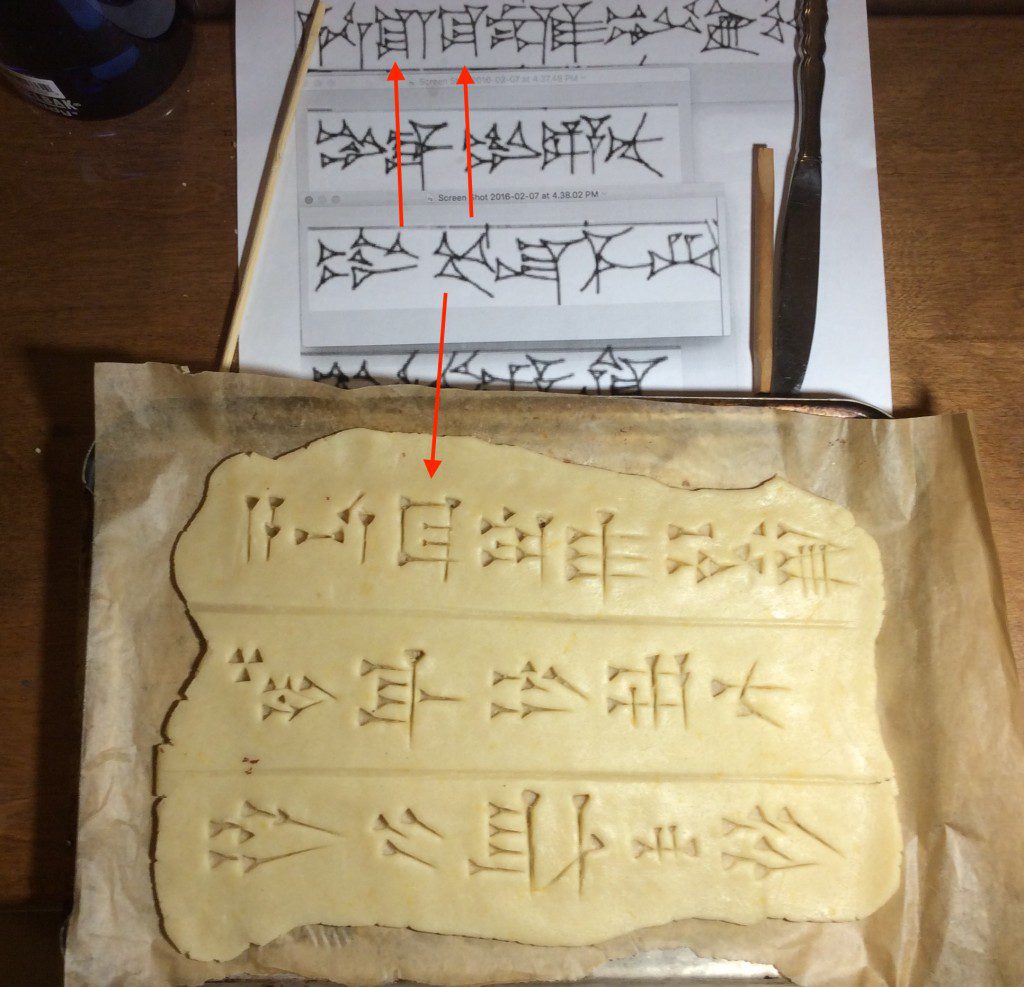 And to learn more about Chronicles vs. Samuel/Kings, see my post here, with some links. I also recommend a general book, Peter Enns’ Inspiration and Incarnation: Evangelicals and the Problem of the Old Testament. (I reviewed this volume for Interpreter, here.) Enns also talks about Chronicles in this volume, and Kenton Sparks does as well here.

February 14, 2016 BoM Gospel Doctrine Lesson 7: 2 Nephi 3-5
Recent Comments
3 Comments | Leave a Comment
Browse Our Archives
get the latest from
Latter-day Saint
Sign up for our newsletter
Related posts from Benjamin the Scribe