Samhain: The Wheel of Life & Death

A friend of mine recently was relating his tale of how, in his work as a university chaplain, he was recently called upon to take part in a multifaith ritual to honour the passing of a student who had hanged himself in the stairwell; and to cleanse the space where this tragedy had taken place.  He spoke of serving as a conduit for the common human experience of grief and death, and of coming together through mutual need and faith to heal the hole that was created by the sorrow of this event.  I can relate, and I was reminded of a similar experience.  It’s a story of Samhain, a story of death and grief, but also of love and community, and I thought I would share it with you.

I graduated high school in 1993.  It was the middle of the Satanic Panic, so even at metaphysical shops it was hard to find other Pagans.  I’d been practicing seriously now for at least five years and I was ready to find others to share my practice with.  Fortunately there was also Yahoogroups, and within a few weeks, a few of us had formed a group called “Okanagan Pagans.”  We’d gathered a group of mostly eclectic, solitary Pagans who were looking to connect with others, and we spanned the gamut from early Asatru to witches to Wiccans to Celtic Reconstructionists to Reclaiming to early Devotional Polytheists.

One of our number was a lovely young woman named Jodi.  She was delicate and beautiful like a flower, dressed in a slightly goth way when goth was just becoming a thing, and everyone loved her.  In a way she quickly become the heart of the group.  She was sweet-natured, and in the chaos of blossoming Pagan egos she was the eternal peacemaker.  Another member of our group quickly developed a relationship with her and we were delighted that our spirituality had brought two such obviously lonely people together.

The first ritual we did as a group was at my place on Mabon; Jodi’s boyfriend and my friend Angela were presiding.  I remember feeling such joy at us coming together.  No more was I everyone else’s “weird witch friend;” everyone else who was there was a witch too.  I couldn’t wait to lead a ritual for a group of people who weren’t just going along for my sake, and I volunteered for Samhain.  Another member of the group who lived in Penticton, Unruhe, agreed to open up her home.

I arrived with my ceremonial horn, my drum, my rattle, and my other ritual implements.  Jodi’s boyfriend showed up with his impressive collection of drums.  Everyone else arrived one by one, and we munched on snacks and we waited — but there was no sign of Jodi.  Eventually her boyfriend called her house and the news was a terrible shock.  Jodi had apparently taken her own life; her body had been discovered that morning.

Obviously no one was in the mood to celebrate any further.  But we were Pagans, and for us, death is a part of life.  We agreed that Samhain was the proper time for a death rite anyway, and all of sudden I found myself, in my first public ritual, presiding over a ritual of passing over.

So we gathered up our ritual tools; our drums and our rattles.  I cast circle; I called quarters; and I called upon the Dark Goddess and the Horned God, and I asked Them to take Jodi’s hand and guide her gently to the Summerlands.  We spoke to her; we made offerings.  And we chanted, we drummed, we sang, and gently we danced; and together we wept and shared our grief and our hopes. I don’t know how long it was; an hour? Two?  Three?

But eventually we reached a point at which we felt that we’d wept the tears we needed to weep, and the chant drew to a close.  We raised a cone of power and sent it into the Universe, sending the spirit of our friend with it.  And the Goddess and the Horned Lord took our grief and our tears and healed us and made us whole.

I’ve lost a lot of good friends this year.  My ancestor altar will be full of pictures.  But I remember the lesson of Samhain.  Death is a part of life; life is the flip side of death.  Though we will be reunited with our loved ones again and we know this, on Samhain, celebrate being alive with all of your passion and might; because Death comes for us all soon enough! 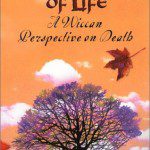 October 24, 2015
Book Review: In the Service of Life - A Wiccan Perspective on Death
Next Post 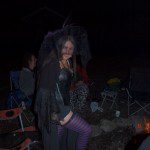 October 31, 2015 Happy Samhain / Happy Beltane!
Recent Comments
0 | Leave a Comment
"Take heart, Woods! I think people are finally angry and scared enough to get their ..."
Sable Aradia Dear Greta Thunberg
"You did make a difference, as did the Baby Boomer generation (who first brought attention ..."
Woods Wizard Dear Greta Thunberg
"I really like your text. I am happy to note that on the other side ..."
Seren The Star Goddess
"Very spot on review of Circe. This was one of the few books I read ..."
Michelle Gillian Pagan Book Review: Circe by Madeline ..."
Browse Our Archives
Related posts from Between the Shadows