The Wane in the Main(line) without Refrain 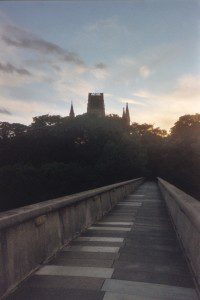 Duke Professor Mark Chaves has been tracking trends in American religion for some long time now, and in his recent study “American Religion: Contemporary Trends” he concludes that over the last generation there has been a ‘softening’ in American commitment to traditional Judaeo-Christian religion.

This ‘softening’ is said to affect everything from whether people feel like they ought to go to worship, to whom they are prepared to marry, to how they identify themselves if asked religious questions. Far more people are prepared to say either that they don’t belong to any religion now than in the past, or that they are not ‘religious’ but sometimes they add ‘just spiritual’. As many as 20% of all Americans now say they don’t belong to any religious group at all compared to 3% in the 1950s. Nonetheless, 92% of all Americans say they still believe in God, but many of them just don’t use ‘religion’ to self-identify much any more.

The other side of the trend is that those who have remained devout in their religion have tended to become more conservative in their politics over the same span of time. In short, today, church-goers are far more likely to be conservative Republicans than any kind of Democrat. At the same time, the persons who are leaving churches at a rapid rate are liberal Democrats. This is the conclusion of Bradley Wright in his 2010 book ‘Christians are Hate-filled Hypocrites— and Other Lies you’ve Been Told’. Finally, the major growth trends in American religion are in immigrant groups (i.e. Hispanics) more than in other groups.

October 26, 2011
Why Capital Punishment is not such a Capital and Christian Idea
Next Post

October 28, 2011 Moses' Blessing
Browse Our Archives
Related posts from The Bible and Culture

Evangelical
Into Turkey-- Part Twenty-Four
The Bible and Culture