The Ripening of the Green Collection 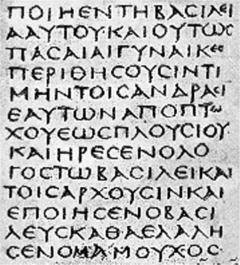 On Friday Last I was in Charlotte to view a very small portion of the Green Collection of Biblical manuscripts, including not only old Bibles (e.g. Tyndale, KJV, Coverdale) but original OT and NT manuscripts, Qumran manuscripts, cuneiform tablets, and a host of other things (there are some 40,000 pieces to the Green Collection and counting). This collection has been assembled at an incredible rate, since 2009, with the Green’s buying up all kinds of manuscripts and artifacts on the open market through Sotheby’s and other such auction houses. The results are stunning. Here is a little summary from a relevant website—

The principal holdings of the collection include:

Middle English biblical texts including an extremely important, extensive unpublished ms of Richard Rolle’s Psalms and Commentary and Wycliffe manuscripts as well as other vernacular traditions represented in Dutch, German, Bohemian and French;
A wide range of incunables from the only complete Block Book in private hands in the world, to an extensive portion of the Gutenberg Bible and many other later editions;
A comprehensive collection of sixteenth to nineteenth-century Bibles and historical items consisting of over 25,000 items, a large collection of Tyndale works and translations, and other Bibles up to the KJV, including one of the largest holdings of KJV ‘He’ Bibles and seventeenth-century folios in the world.”
——-

The scholars I met who are currently involved with the collection were two from Baylor— Scott Carroll and Jerry Pattengale. Here is part of what they are doing.

Gordon Campbell’s research on the King James Bible has led to a productive collaboration with the Green Scholars Initiative. The ‘Green’ of the title is not an environmental allegiance, but rather an acknowledgement of munificence of the Green family, a benevolent and beneficent American family whose fortune rests on the chain of Hobby Lobby stores and whose burgeoning collection is centred on Biblical materials.

The Green Collection will soon be installed as a non-sectarian museum of the Bible. The family takes the laudable view that the collection (which is described below) should not be inert, but should be the wellspring of scholarship and pedagogy; this aspiration is being realised through the visionary work of Dr Scott Carroll, the director of the collection and a formidable student of the ancient Biblical languages.

The Green Scholars Initiative, which is directed by the educationalist and ancient historian Jerry Pattengale, selects senior scholars and places them over a team of scholar-teachers working mostly with undergraduates on a research project. The provision of hands-on original research opportunities for undergraduates reflects an aspiration to revolutionize the undergraduate research experience for generations of students.

One such project has already started: academics and students from a dozen universities are working under Dirk Obbink at Christ Church College (Oxford) on a papyrus project that will lead to major publications.
Green Scholars Initiative and the King James Version

Gordon Campbell and the Reverend Professor Alister McGrath (King’s College London) will be the senior scholars on a project that explores the sources for the KJV and the most important revisions made until the modern text was established by Oxford University Press in 1769.

Students from one group of participating universities and seminaries will examine the sources used by the KJV translators, including earlier English versions, the original languages (Hebrew, Aramaic and Greek) contemporary translations into languages other than English (especially Protestant Bibles in Latin, French, Italian, Spanish and German), and early Bibles (and quotations from Bibles) in other languages on which the translators drew (notably Syriac, but also Arabic, Coptic, Ethiopic (Ge’ez) and Samaritan).

Students from another group of universities will track changes in the text from 1611 to 1769. In both cases scholarly and pedagogical methodologies will be developed through a mentoring system that flows downwards to classrooms and then upwards to a scholarly edition of the KJV which tracks origins and changes through critical annotations. The scale of the project is huge – and unprecedented – and so will probably begin with a single book of the Bible.”
——

The brief lecture by Scott Carroll at GCTS Charlotte last Friday night highlighted some of the most exciting aspects of the Green Collection. It is possible that a very early copy of the Gospel of Mark in Greek, possibly the very earliest is a part of this collection. An epigrapher from Oxford has already prepared to say that it is a first century copy! While I doubt this, and various eyes will need to go over the manuscript before any firm conclusion can be drawn, even if it were from the second-third century it would still be the earliest evidence of this size (it does not include the whole Gospel, sadly it does not include Mark 16) that we have.

Equally exciting was the discussion of mummy masks which the Green Collection has acquired. While the masks are interesting in themselves and of historical importance, some of these masks used ancient manuscripts retrieved from a scrap heap in Egypt in places like Oxyrhynchus to serve as the paper mache inner lining of the mask. Scott Carroll says they have found both early Biblical manuscripts and early classics manuscripts (a lost work of Aristotle, the earliest copy of some of Demosthenes etc.). If so, this is tremendously exciting.

The exhibit leaves to be displayed at the Vatican next week, but it will be back to the States in due course, and you should look out for it, as it is well worth seeing. There are a lot of Holocaust Torah scrolls, rare or otherwise uncatalogued original copies of Tyndale and Wycliffe’s Bibles as well as papyri fragments from the OT and NT and Qumran. One interesting point made by Carroll was that there is evidence of a first century copy of a NT text in codex form, whereas various scholars thought Christians probably didn’t use this practice before the second century. Stay tuned for more.