Graffiti and Gematria in Early Christianity 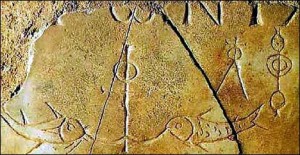 Having seen the graffiti at Smyrna with my own naked eye, naturally I was very interested to see the following two posts by our friend Larry Hurtado.
My own judgment is we do indeed have early Christian graffiti at this site off the agora in Smyrna, which is just another reminder that early Christian communities were not largely composed of a bunch of illiterate slaves or peasants. Ordinary people were expected to be able to read these graffiti and respond accordingly.

I made a mental note some months ago to get my hands on the new book by Roger Bagnall, Everyday Writing in the Graeco-Roman World(Berkeley: University of California Press, 2011), and a recent email from Brent Nongbri nudged me to get to it today. Bagnall is a leading figure in papyrology with numerous major contributions to the study of the subject. In this book, he surveys the evidence (and the reasons for the limits of that evidence) for “everyday” writing, by which he means the sort of writing that is more functional, pragmatic, and some of it ephemeral. In social terms, these materials serve to help us judge how much writing was used for purposes other than monumental inscriptions, official proclamations, religious and philosophical traditions, and high-literary works of history, poetry, etc.

Bagnall begins with graffiti (to which I return in a separate posting soon), focusing on a body of graffiti from ancient Smyrna, and then surveys the “ubiquity” of “documentary” texts (legal texts, letters, etc.), texts reflecting slavery, the rise of written Coptic and the use of written Syriac/Aramaic alongside Greek, and the use of ostraca (potsherds).

The broad import of the book is to caution us still more about simplistic views of the Graeco-Roman world as one in which texts and writing were the exclusive domain of a few elite. A few of his summarizing judgments will suffice here: “The ubiquity and pervasiveness of everyday writing in Greek is clearly visible; that in the other great metropolitan written languages, Aramaic and Latin, is less well documented but starting to come into focus as well” (141); “Even in a world where many people could not read or write, the use of written languages was not something restricted to a small, high-status group. Writing was everywhere, and a very wide range of people participated in the use of writing in some fashion” (142); whereas some have claimed that writing was restricted to “a small class of literate mediators,” in fact “writing was far more pervasive and important than that; it was used all the time for private, informal, spontaneous, and ephemeral communications, writing for which one would not wish to spend the time and money to go to a professional scribe” (142).

Bagnall’s book offers another strong reason to avoid playing off “orality” against “textuality”, and should further caution those biblical scholars who have done so on the basis of an inadequate consideration of the evidence. Early Christianity emerged in a world heavily shaped by texts of many kinds, and was, in fact, in that very textual world itself a remarkably given to the production, reading, copying and circulation of texts.

In my previous posting I briefly described Roger Bagnall’s new book, Everyday Writing in the Graeco-Roman East, and I mentioned his lead chapter on a body of graffiti from ancient Smyrna. Among the items he discusses in this chapter, I was particularly (predictably!) intrigued with one that Bagnall confidently claims must be Christian (pp. 22-23). Here are the basic data:

The graffiti in question are on plastered surfaces in the basement of a city structure, and there are multiple layers of plaster laid on across time.
One graffito includes a date, which Bagnall correlates to 125/126 CE.
The layer of plaster beneath the layer on which this dated graffito is written is partially exposed, and on this exposed plaster is “a most remarkable graffito, incised into the plaster rather than written with ink or charcoal.” This graffito reads:

The first word, ισοψηφα, means “of equal value/number”, indicating that the graffito is an example of “isopsephy”, the ancient practice of comparing words of equal numerical value (by adding up the value of their letters). The letters of each of the two words, κυριος and πιστις, = 800, which is expressed by the omega after each one (the omega = 800).

The distinguishing centrality of these two Greek words in early Christian vocabulary (as well as the interest in 8 and multiples of 8) combine to prompt Bagnall’s judgment that the graffito “can only indicate a Christian character” (22).
As this graffito is on a layer of plaster just beneath the layer with the dated graffito, it must be dated earlier than 125 CE, perhaps some years earlier. This would make this certainly the earliest identifiable Christian graffito, and perhaps also likely the earliest artifact of Christian writing.

Perhaps because Bagnall doesn’t have a TV production company behind him, we haven’t seen this item in the daily news. But, while we wait to see what scholars make of the Talpiot tombs, and whether in fact we have a fragment of a 1st-century copy of the Gospel of Mark, here we have a published artifact that has strong claims for anyone interested in the origins of Christianity.

Bagnall also notes a few other graffiti from Smyrna that he judges “possible references to Christianity” (23). These include a fragmentary graffito that can be restored as “the one who has given the spirit”. Another partially-preserved graffito “even more tantalizingly” has the letters ΚΑΡΠΟΣ, which Bagnall wonders might have been the name of Polycarp, a leader in the church in Smyrna in the period of the graffito.

Isopsephy was taken up by ancient Jews, and the Jewish practice is called “gematria” (from the Greek word “geometria”), and it is interesting that among our earliest literary examples are instances in NT writings that likely stem from Jewish-Christian authors: the best-known one Revelation 13:18 and also (more subtly) Matthew 1:17 (alluding to the numerical value of “David” in Hebrew characters). Roughly contemporary are instances in 3 Baruch and Sibylline Oracles 5, lines 12-51. The second-century Christian text, Epistle of Barnabas, uses the technique in expounding the meaning of the 318 servants of Abraham (Gen 14:14) as the cross of Jesus (318 written as the Greek letters TIH, the T = cross/crucifixion, and the IH the first two letters of Jesus’ name). For a helpful introduction, see the entry on “Gematria” by Gideon Bohak in The Eerdmans Dictionary of Early Judaism, eds. J. J. Collins & D. C. Harlow (Grand Rapds: Eerdmans, 2010), 661.

April 22, 2012 The Historical Jesus Revisited
Browse Our Archives
get the latest updates from
The Bible and Culture
and the Patheos
Evangelical
Channel
POPULAR AT PATHEOS Evangelical
1