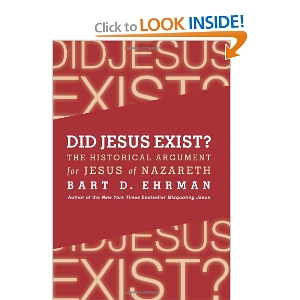 Q. Much weight is often placed on the testimony of Josephus about Jesus and his brother. You argue in the book that at least in an edited form, the Josephus evidence is quite important first century evidence in establishing the existence of Jesus, and presumably also establishing something of when he lived and what he did. Do you see Josephus as a generally reliable historian or put another way a more objective witness since he was not a follower of Jesus?

A. Josephus is an important witness to the fact that there were traditions about Jesus in circulation near the end of the first century outside of Christian circles. He did not get his information from the Gospels, but from other (unknown) sources. So that’s very important. But no one would say that Josephus was objective in his reporting (at least, no scholar of Josephus would say that). He was far from objective! His biases and agenda very much guided his writing. Still, when it comes to what he has to say about Jesus, he was obviously not presenting a biased account in favor of Jesus (in other words, his account is very different from Christian reports that wanted to affirm Jesus for reasons of their own).
When I say this, I am referring to the scholarly reconstruction of what Josephus probably actually wrote, not the Testimonium Flavianum, as it is called, as it now appears in his book the Antiquities.

The Testimonium that we have in the late manuscripts of Josephus has clearly and obviously been “doctored up” by a Christian scribe, since Josephus himself (as we know, e.g., from his autobiography) never became a Christian and so did not himself believe that Jesus was the messiah who was raised from the dead in fulfillment of the Scriptures (as the Testimonium relates).

But Josephus did refer to Jesus, and he does give us some valuable information about him. And he is the first non-Christian source to do so. This is important historical data, as it shows that Jesus was thought of as having lived a real life by the most important Jewish historian of the first century. As such the Testimonium provides us with some much-needed confirmation of information that we can glean from our Christian sources.

Q. Have you considered the recent evidence from the trial of Oded Golan (now over with the defend exonerated) in regard to the James ossuary in which under oath, the head of the IAA was forced to admit that the last third of the inscription (the brother of Jesus part) had genuine ancient patina in it, and then later the IAA lead epigrapher (Ada Yardeni) testified she was convinced the whole inscription James son of Joseph brother of Jesus was a genuine first century inscription? How would this sort of evidence, if genuine, change the discussion of the historical Jesus?

A. I do not think the ossuary provides us with a reliable reference to Jesus. On one hand, I am persuaded by the overwhelming consensus among Palestinian archaeologists, that the inscription is probably a forgery (I’m not an expert on this, as I am not a professional archaeologist; my view is that the professionals are the ones qualified to speak about it. And the experts are pretty unified – or so my colleagues Eric Meyers and Jodi Magness – two of the top experts in the field – tell me). On the other hand, even if it’s not forged, it does not seem obvious to me, or to most other historians in early Christianity that I know, that the inscription has anything to do with Jesus of Nazareth, for all sorts of reasons that experts like Magness have spelled out at length.

Q. In the middle portion of your book, you place a great deal of emphasis on what is usually called the criteria of multiple attestation to demonstrate that Jesus surely existed. Would you explain briefly why historians place so much stock in this criteria, and why it is especially important when dealing with the question of the existence of Jesus.

A. Multiple attestation is one of the most important historical criteria for establishing what happened in the past – not just for historical Jesus research, but for any serious historical research. If the sources to a historical person or event are biased, then it is impossible to know if one of them has just “made something up,” if it is our only witness. But if there are several sources available that independently indicate that an event happened (or that a person lived, etc.), then no one of them could have made it up – since they all report it without having conferred with one another. Some scholars see this criterion as the most important one available for establishing what happened in the past.

And it is extremely useful for establishing the existence of Jesus. If we had only one ancient source that indicated that Jesus lived, we would not be able to make a very strong case. But the reality is that we have lots of sources. Whether or not these sources are biased is immaterial when it comes to this criterion. In addition to Josephus, Pliny, and Tacitus – which are not biased in favor of Jesus’ existence, but which are too late to be of supreme importance (since they are so many years after the fact) – we have numerous Christian sources (on which the non-Christian ones are not dependent). In addition to Paul (who is quite clear and explicit that there was a man Jesus!) we have our first Gospel, Mark, itself based on numerous earlier sources, some of them demonstrably circulating at one point in Aramaic, the native language of Jesus.

But there is much more. Matthew and Luke had numerous sources at their disposal in addition to Mark; we call their respective sources Q (for the material found in both Matthew and Luke not in Mark, such as the beatitudes and the Lord’s prayer), M” (Matthew’s special source, or sources; M may have been one document or, more likely, one or more documents and a collection of oral traditions), and “L” (Luke’s special sources). All of these speak of Jesus’ words and deeds. So does John, and all of John’s sources, which appear to have been independent of the other Gospels. As do the Gospel of Peter and the Gospel of Thomas, which I take also to have been independent of the other Gospels.

In short, we not only have lots of sources, we have lots of independent sources, from within a hundred years of Jesus’ death, that are absolutely unified in claiming that he was a Jewish teacher from Galilee. I don’t see how we could have this many sources – some of which can be traced to Palestine, and within a few years of the traditional date of Jesus’ death – unless Jesus really existed. This argument has to be taken in conjunction with others, of course, including the importance of Paul himself, who heard stories about Jesus just a couple of years after his death at the outside (more likely within a year or so), and who actually knew, personally, Jesus’ closest disciple and his own brother. Taken together, these independent sources make a compelling argument for Jesus’ existence.

June 9, 2012 Bart Ehrman on 'Did Jesus Exist?' Part Five
Browse Our Archives
get the latest updates from
The Bible and Culture
and the Patheos
Evangelical
Channel
POPULAR AT PATHEOS Evangelical
1

Evangelical
A Text without a Context is a Pretext...
The Bible and Culture
TRENDING AT PATHEOS Evangelical