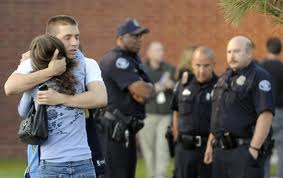 In the wake of the disaster at the Cineplex in Aurora Colorado it really is time for us to rethink entirely our gun (and ammo) control laws. Colorado has one of the most lax gun control laws in the country, in fact in the world. The arguments of the NRA and other gun totters no longer hold any merit in the wake of 71 people being injured or killed by a person who bought guns entirely legally and never had more than a speeding ticket before in terms of ‘criminal’ activity. The typical arguments for lax gun control laws no longer hold any water at all. But let’s listen to them one more time.

But none of that is the issue. The issue is the mayhem that guns can do in the hands of even those who may be perfectly normal and alright most of the time, but simply have a really bad day and get angry. You don’t have to be a psychopath to kill a person. You just have to have guns too readily available at the wrong time.

‘If guns cause crime then pencils cause misspelled words’

This illogic is dazzling. First of all, guns aren’t pencils. I’ve never heard of death by pencil. We don’t need pencil control laws because they are not that dangerous. Being shot by a gun is another matter. The more dangerous the object the more legal control of it is necessary. There is a reason you can’t by a heat seeking missile at Walmart. The point is that guns can even accidentally be the instruments of death…. like when a child picks up a loaded gun left around in a home and shoots his sister. They are enormously dangerous, even in the hands of responsible ordinary people. Especially in the hands of innocent children or teens.

‘Gun shows are for collectors and responsible enthusiasts. They are not primarily to make money.’

Yes, I’ve heard that argument. If that really were the case then stop selling guns altogether at such shows, or at least stop selling them until a complete background check has been done on any and all purchasers. And also make them wait a day or two or a week to get their weapons. Unfortunately even that is not enough to have stopped the Aurora killer. So something more than that needs to be in place.

‘I have a Constitutional right to bear arms’.

The Founding Fathers could not have imagined the sorts of weapons you can buy over the counter today—assault rifles, Glocks with multiple rounds possible, and I could go on. Besides, the Founding Fathers were mainly talking about militias in each of the colonies, not the right of a private citizen to build the sort of arsenal or buy the sort of explosives the Aurora killer had. If the real issue is to have the right to a hunting rifle or say a private firearm because of safety needs where you live, then fine. Ban all other kinds of weapons to public purchase– all weapons that act like machine guns firing multiple rounds.

This of course is patently false, unless we ban the sale of guns altogether. It also entirely ignores the fact that the police will always have guns. This is no argument against stricter gun control laws.

‘The Killing of those people in Aurora was Tragic, but it Suggests Ordinary Citizens should have even more rights to Bear Arms, even in a Crowded Theater’.

I do not think it is any accident that both the Columbine killings and the Aurora killings took place in Colorado, which, as I have said, has some of the most lax gun control laws anywhere. Whatever the merits of our rights to bear arms argument, the real basis of this argument is fear based thinking. You are afraid, and you think a gun will protect you. Most of the time that’s absolutely untrue. Scared people are as likely to harm themselves or a loved one in a crisis situation at home, or harm an innocent bystander in a public place as shoot or kill an assailant.

THE BIG ISSUE IS THAT THE GUN CONTROL LAW MATTER SHOULD NOT BE DECIDED ON THE BASIS OF FEAR BASED THINKING. Fear of what might happen if I don’t have a gun. Fear or anger are both very dangerous emotions when you have a loaded gun. They just are.

If the NRA and the gun totters want their rhetoric to be taken seriously any more then they will:

1) Come out in favor of an absolute ban on assault rifles and pistols.
2) Come out in favor of a waiting period for the purchase of any gun at all. No one needs a gun overnight or right now, or if they do, they should have already called the police. Let’s say a week, until a thorough background check can be done. A week is not a long time. But it is long enough for a person to get over a burst of anger, or the paralyzing feeling of fear that comes and goes.
3) The NRA will stop favoring the ability of ordinary persons to carry concealed weapons in public.
4) The NRA will advocate gun shows no longer being able to sell weapons on the spot. They will strongly advocate that even at gun shows, background checks are required.
5) The NRA will oppose certain kinds of ammunition that do not serve the purpose of hunting, say a clean kill of a deer, but have the purpose of ripping human parts into pieces. In other words they are instruments of extreme cruelty, the desire to maim but not necessarily kill, to torment and torture and not necessarily take a life.

That would be a good start. The NRA should take the lead in this matter if they want anyone to take seriously their argument that they are for responsible gun use. We now live in a country full of dysfunctional, diseased, and just plain mentally ill persons. And all of those sorts of persons if they have no criminal records can still buy guns. This is a good reason to strengthen gun control laws now.

July 22, 2012 Asbury Grad Joe Castillo on America's Got Talent
Browse Our Archives
get the latest from
The Bible and Culture
Sign up for our newsletter
POPULAR AT PATHEOS Evangelical
1

The Republicans' Three-Legged Stool is Coming...
Cranach
Books by This Author Books by Ben Witherington