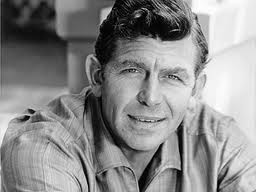 I loved Andy Griffith for many reasons, and whilst I was reading his lengthy obituary in the Carolina Alumni Review there was this testimony to him that gave me one more— Cindi his wife since 1983 said “Andy was a person of incredibly strong Christian faith and he was prepared for the day when he would be called Home to his Lord. He is the love of my life, my constant companion, my partner, and my best friend. I cannot imagine life without Andy, but I take comfort and strength in God’s grace and in the knowledge that Andy is at peace and with God.”

Andy of course, like myself, was a native of North Carolina, growing up in Mt. Airy and finishing on Roanoke island (i.e. Manteo). Like myself he went to Carolina doing music and Shakespeare, among other things, and he got the acting bug. You know about his famous TV shows, The Andy Griffith Show and Mayberry RFD and Matlock, and there were numerous movies as well. What you don’t know is that when Andy went to Carolina in 1949 my Dad had just been there as well, and they looked alike and sounded alike. They also shared Goldsboro, my father’s home town, and the place where Andy first taught music for three years after college. When I hear Andy Griffith, I hear my Dad, not least because my Dad used to do his famous ‘football’ routine, which actually is what first made him famous (the record of it sold 800,000). Andy’s career finished with music to, he won a Grammy for his wonderful album of hymns and spirituals in 1996. What you may not know is that when Andy went to college, he planned to become a Moravian minister, but the acting bug bit him good, and the rest, as they say is history. As my own small tribute to a wonderful Tar Heel, here is the comedy recording that first made him famous— enjoy.

July 29, 2012 Gordon Fee's Thesis Now Available
Browse Our Archives
get the latest from
The Bible and Culture
Sign up for our newsletter
POPULAR AT PATHEOS Evangelical
1