Is America a Secular Nation? 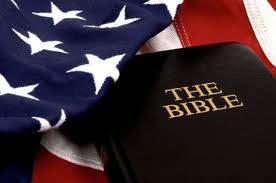 To some it seems self-evident. America is a secular country. It does not officially or legally endorse any particular religion. This must make it secular—– right? Actually, this is incorrect in almost any way you could analyze the situation. Let’s take the situation de facto first. As any recent Gallup poll will show you, Americans are a profoundly religious bunch. Some polls show us that somewhere close to 85% of all those polls consider themselves religious or very religious, spiritual or very spiritual, and an even higher number believe in God. Indeed, one of the things Europeans or Australians most note about America in contrast to their country is how very religious Americans are. This was noted by Lafayette back during the American Revolution and it is noticeable today as well.

This has not changed about America during its entire history. Nor did it change at the beginning of the 21rst century. During any given weekend, most Americans are in a church or a synagogue or a mosque or some religious building. There is nothing very secular about the de facto state of the American soul. It has become more religiously pluralistic in my lifetime, but it has not become less religious.

But what about those founding documents— the Declaration, the Constitution, the Bill of Rights. Didn’t they set up a secular society for America? Didn’t they set up ‘a separation of church and state’? Look hard— can you find any clause that uses that phrase in our founding documents? Basically this incorrect. You will fail to find a pronouncement that sets up some Berlin-like wall between the secular and the sacred in these documents.

It is quite true that the Founding Fathers intended to avoid the mistake of setting up an official state religion. They saw the problems with this in Europe and elsewhere. What they did not do is :1) codify some kind of rule that would prohibit the church from influencing the state. Indeed, they were more concerned with protecting the church from influence by the state. Think about it for a moment—why exactly are churches and synagogues and other entities tax exempt entities? Because, of course the Founding Fathers wanted these entities to survive and thrive in America, and they believed they had the ability to do all kinds of good for our society. And they were right. 2) they did not go on a campaign to eliminate God language from our public buildings, our seminal documents, or indeed even from the day to day existence of the House or the Senate. To the contrary, not only is the President sworn in on a Bible, there is a chaplain of the Senate and the House. Indeed, one of my friends, Richard Halverson was the chaplain of the Senate about 30 years ago. 3) Not only have we not been in the habit of electing secular persons to be the leaders of our land, we have often gone out of our way to avoid it. Note that every President we have had was either a Protestant or in the case of JFK a Catholic of some description.

What makes Mitt Romney stand out like a sore thumb is he is the first Mormon to even come up for consideration for President. And no, Mormonism is not just another Christian denomination, whatever mixed messages you may have been receiving on the matter in the last year or so. But this hardly means that Romney is a secular person. To the contrary, he gives every appearance of being devoutly religious (he’s even been the Mormon equivalent of being a bishop).

Now it is true that there is a small minority of Americans who are atheists or agnostics who have been on a mission to try and set up a separation between church and state, and indeed, to even remove God language and Biblical influence and quotations from various public venues on the assumption we are and ought to be a secular society, and they have certainly had some success in changing American laws, and public displays of Nativity scenes and the like.

This however is not because we ‘really’ live in a secular society, or because this is more in accord with what the Founding Fathers had in mind. It is because we live in a democratic society where strong advocacy and strenuous efforts and zeal often get you somewhere, and it is true to some extent that ‘the squeaky wheel gets the grease’.

To religious people of various stripes of course this development is disturbing, not least because it gives the lie to the notion that ‘the majority rules’ in a democracy. Not true. If the majority doesn’t vote, doesn’t care, and doesn’t act, the minority rules. Indeed, this often happens. What can one say about a society that crows about its freedom and democracy, and yet even in a national election only a slight majority of potential voters actually vote? It would be nearer the truth to say that America is a narcissistic ‘who cares’ society when it comes to politics than to say it is a secular society. And then there is this….

The word secular comes from the Latin ‘saeculum, saeculorum which simply means of the age. Thus for example in ancient Rome, the ‘secular’ games were games which ended a particular era, a particular period of time. In medieval Christian circles it refered to Christians not bound by the vows of monks or nuns. In other words, it meant laity who had not committed themselves for a particular period of time to a monastery or a nunnery. Even the origin of the word has nothing to do with some ‘sacred’ vs. ‘secular’ (in the sense of non-religious) distinction. And dat’s all I got to say about dat.

August 4, 2012 Critical Study of the Bible and My Faith Journey
Browse Our Archives
Related posts from The Bible and Culture