Women in the Hood— ‘A Year of Biblical Womanhood’ 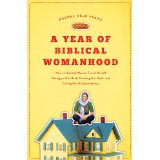 In the wake of the runaway best seller of A.J. Jacobs, The Year of Living Biblically previously reviewed on this blog, it is hardly a surprise that somebody thought it was a good idea to do such a book from a woman’s point of view. The former book was written by a basically secular Jew who decided to be ‘observant’ for a year. A Year of Biblical Womanhood however is a horse of a different color– written by an Evangelical woman who is hardly trying on orthodox praxis just for a year. It written by award winning writer and blogger Rachel Held Evans.

Jacobs, interestingly, even tries his hand at some NT praxis, which he didn’t have to do as a Jew. Even more surprisingly Evans tries her hand at a lot of OT and even modern Jewish praxis, which she also didn’t have to do. After all, Christians are frankly not under any form of the old covenant and so its a bit surprising to find, for example, a whole chapter of Rachel following Jewish practices in regard to menstruation. This may seem to some to smack of irreverence, or even making a mockery of Jewish praxis, but it shouldn’t be taken that way. Rachel is not trying to play at being Jewish, she is sincerely trying to get inside of what Biblical womanhood is in its essence, taking as wide a swath as possible of texts and Biblical women as examples.

Full Disclosure: while Rachel does come from a somewhat fundamentalist Protestant background, this book will not be endorsed by the Recovering Biblical Manhood and Womanhood crowd. Rachel is not one of the girls in that hood, or headcovering, or burka.

Like the Jacobs book, this book is divided up into 12 monthly segments, however in addition to that, Rachel has decided to pick twelve qualities attributed to and revered in some text or texts as a Biblical ideal for a woman. These are gentleness, domesticity, obedience, valor, beauty, modesty, purity, fertility, submission, charity,silence, and finally grace. Rachel attempts to model or exhibit each of these qualities for a full month, and undertakes activities and practices to further exhibit the quality in question.

Sometimes in spots (e.g. the chapter on purity) while reading this book as a man, I had that same kind of unintentional voyeuristic or queasy feeling I used to get when as a child my mother would take me to the department store and sometimes I got parked near her in the ladies department, even near the lingerie section, or even worse, I felt like I did when I was commandeered into playing bridge with my mother’s bridge club because someone forgot to come. I sometimes felt like the input I was receiving fell into the category of ‘too much information for guys’ or ‘things I really didn’t need to hear’.

But then, Rachel knows her audience, and it would appear to be overwhelmingly female, to judge from her blog. Still, this is an especially interesting read for a man who has written several books on women in the NT. What is especially interesting is that Rachel is focusing on what can be called ‘the virtues and values’ of Biblical women more than just on practices, though the latter exhibit the former.

At the end of each chapter Rachel presents us with a precis of a ‘woman of valor’ as she calls them, and they turn out to be a truly diverse lot—-Deborah the warrior, Tamar the Trickster, Mary the Mother of God, Vashti the other Queen, Ruth the Moabite, Mary Magdalene, Leah the Unloved, the Samaritan at the Well, Tabitha the Disciple, Junia the Apostle, and Huldah the Prophet. Honestly, I doubt many of these women could pass the litmus test of the Council of Biblical Manhood and Womanhood of God’s ideal woman.

Rachel Held Evans has come by her writing awards honestly. There is some fine writing, and some very funny writing in this book, and Rachel herself is often quite transparent and self-effacing about the ways she falls short of any sort of model of a ‘Biblical woman’ as she tells of her adventures in an entertaining and informative way.

Consider for example the following passage where she rightly objects to the silly Christian allegorizing of the Song of Songs anatomical descriptions (in this case 1.13-16 and 7.7-9) by various rather prudish early church fathers: “According to Origen the two breasts that the suitor is so eager to grasp represent the OT and the NT. The lips he longs to kiss represent the Eucharist, noted another medieval scholar. The luxurious bed on which the lovers lie represents the convents of the Church, said Saint Bernard. Sure. And Hooters represents the American affinity for owl culture.” (p. 111).

Rachel Held Evans is not just another woman using the Bible to write about women’s experiences. She actually is quite adept at Biblical interpretation and has done some good reading and research and exegetical spade work when she is dealing with any kinds of Biblical texts, including the so-called ‘texts of terror’. Whether you agree with her interpretations or not, they are always possible, and often plausible and fair and deserve respect and close scrutiny.

My one real objection to anything she says exegetically is when she suggests that Jesus felt it was o.k. to break the law (e.g. sabbath law or purity law) in service of a higher good. I would say that Jesus is inaugurating a new covenant, a new Kingdom situation, and in the process he has fulfilled the law and the prophets. You don’t see yourself as breaking a law which you are convinced it is part of a bygone era (‘the law and the prophets were until John… since then…’).

There is plenty of useful discussion and interesting anecdotes in this book, and in the process we encounter a couple with a good healthy marriage who deeply love, respect, and serve one another— team Rachel and Dan. It is a heart-warming story about young Evangelicals who do not conform to some of the media’s stereotypes of what such people are like. I was especially heartened by their commitment to the whole Gospel– both spiritual and social holiness… Good News for all including the least, the last and the lost. Good news for the poor and the environment as well.

At the end of the day, the conclusions of this book are really quite wise— “So after twelve months of ‘biblical womanhood’ [including wearing headcoverings and calling her husband master etc.], I’d arrived at the rather unconventional conclusion that there is no such thing. The Bible does not present us with a single model of biblical womanhood, and the notion that it contains a sort of one-size-fits-all formula for how to be a woman of faith is a myth.” (p. 294).

There are indeed a wide variety of women commended (even Rahab the harlot) and a wide variety of roles undertaken by these women in the Bible which are at least implicitly affirmed— including Christian women teaching men (see Priscilla for example). As Rachel says “Far too many church leaders have glossed over these [diverse] stories and attempted to define womanhood by a list of rigid rules. But roles are not fixed. They are not static. Roles come and go; they shift and they change. They are relative to our culture and subject to changing circumstances.” (p. 294).

The same church leaders who harp on a certain reading of texts like Ephes. 5.22ff ignore what Ephes. 5.21 says as a preface to that discussion. The same church leaders who stress what the household code in Col. 3 says about women are dead silent about what it says about slaves. The same church leaders that stress women should not teach according to their reading of 1 Tim. 2 ignore that that passage is correcting problems and begins with a correction of men who are exhorted to stop grumbling and always lift up holy hands in prayer. Outside of charismatic circles, I don’t see much evidence anyone is practicing that teaching much less enforcing that rule. In short, these leaders sound byte the text and privilege and apply only certain parts of it and Rachel rightly calls them out.

Since the Bible makes clear that there are various ways to be God’s woman whether single or married, and various roles exhibited in the text which are legitimate for women to assume, one can only say to Rachel what her husband sometimes says— ‘you go girl’. Find out what the highest and best is for you and what God is calling you to do and to be and pursue it with all your heart, soul, mind and strength.

October 29, 2012
Early Manuscripts of the Gospel of Thomas
Next Post

October 31, 2012 The Art of Facts and the Art of Lying about Artefacts
Browse Our Archives
Related posts from The Bible and Culture

Evangelical
80 for Brady--- Such Fun
The Bible and Culture