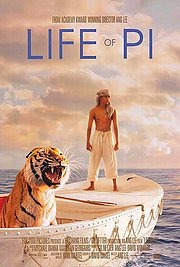 Films involving India and Indians have been all the rage of late, since at least Slum Dog Millionaire. In the Life of Pi, we have another such film, which has a profoundly religious subtext and subtexture. Pi Patel (short for Piscine— a boy named after a French swimming pool) is a boy who grows up in a zoo and botanical garden in India. Pi is bright, and deeply religious…. and he samples different religions like a football player at a steak buffet table. He likes them all, even says Krishna introduced him to Christ, and calls himself a Hindu Catholic. Polytheists of course have no problem adding another deity to their collection, and Pi goes so far as to say that the Hindu gods were like super-heroes to him.

This movie however is more about the interconnectivity of all life, and more specifically it is a story about a boy and his Bengal tiger (who is named Richard Parker)… stuck on a small row boat in the Pacific for weeks and weeks. Pi, not surprisingly, keeps probing the meaning of all the suffering that he sees some god as putting him through. And make no mistake there is suffering— Pi loses his whole family in a horrible storm at sea which sinks the freighter he, his family, and a Noah’s ark worth of animals are on. The Patels are trying to movie to Canada, in order to start a new life. The only survivorss are Pi and Richard Parker.

There are some things to commend about this movie. First there is the spectacular cinematography which in and of itself is well worth the price of admission. There are scenes and segments of stunning beauty. Secondly, the story of survival at sea against all odds is indeed a story worth telling of human courage, and Pi Patel insists the only reason he does survive is due to the challenge of living with his fierce friend Richard Parker. But this is not a Narnia tale about Aslan, this is a very different sort of king of the beasts story. The story of course is based on the best selling novel of the same name.

There are however problems with the story. Firstly the lost at sea part of the story takes up most of the film, and takes too long to tell. The movie is 2 hours and seven minutes and for close to an hour and a half of it we are out to sea and wondering where this is all going. The second and more profound problem with the film is the all too familiar attempt to blend all religions together in the mental cuisinart, ignoring the importance, indeed the vitality of the differences. The religious element in the film ends up more like chicken soup for the soul rather than profound discussions about the meaning of life and of God’s role in it.

Thirdly, there is the problem of the notion, not unusual in eastern religions of the sacredness of all life, taken to the degree that some of the main characters in the film are vegetarians. The problem of course with this is that if you believe in the sacredness of all life, then why not plants as well— why not fruits and vegetables as well? This whole animistic form of religion of course denies that humans are uniquely created in the image of God, and that other creatures were in part created for our use, including for food. Life is all valuable, but it is not all sacred. There is, for example, nothing sacred about flesh eating bacteria.

I found the story telling in this film at points excellent, and full of pathos, but I also found it’s presentation of the divine-human encounter, confused and confusing at best. While Pi at the end is right to say that it is right to believe in God, because that makes a better story out of life, he does not pause to tell us why that is so. We are tantalized but not helped, in the end, by the spiritual dimensions in this film. Still, it is well worth seeing, especially visually, and I give it a rating of 3.14…….. which is to say, I give it a rating of pi.

November 25, 2012 Self-Designations and Group Identity-- Part Seven
Browse Our Archives
get the latest updates from
The Bible and Culture
and the Patheos
Evangelical
Channel
POPULAR AT PATHEOS Evangelical
1