The Slaughtering of the Innocents—- Again 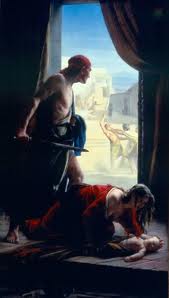 We are all familiar with the story of nasty old King Herod and the slaughtering of the innocents. Herod was indeed a paranoid Idumean who just happened to be king in Judaea. There would always be questions about his legitimacy as a ruler in that land. And in order to maintain his throne he was prepared to kill some of his wives and offspring as well. ‘Paranoia strikes deep/ into your life it will creep/ it starts when you’re always afraid….step out of line ‘the man’ comes and take you away…’

There are many things ironic about King Herod, not the least of which is that his fortress built on an artificial hill on the back side of Bethlehem (called the Herodium of course) where he thought he would be safe is also where his tomb was found in the last decade. The story in Matthew’s Gospel is totally believable knowing Herod’s character as displayed at length by Josephus, but we need to not over-imagine the size of the story. Bethlehem was a one horse town at best in Herod’s day, and the number of infants under two would have been exceedingly few— maybe 10-12. So don’t let the gory Renaissance paintings fool you—- what happened in Newtown Conn. this week was likely far worse than what happened in Bethlehem so long ago.

I was watching an interview this week after the massacre in Newtown and the inevitable question was asked—= ‘What could we do to prevent this from happening again?’ The candid answer given by a former head of various FBI operations was as follows— ‘absolutely nothing unless we are prepared to significantly change our gun laws and also change what we do with the mentally ill’. But even that would not be enough because some mass murderers are not technically deranged, they are simply wicked. There is a difference.

In the case of the Newtown killing it seems clear we are dealing with a mentally unbalanced person. Psychologists have already been weighing in with the theory that: 1) Adam was disturbed about his mother’s warm relationships with the school children she taught at Sandy Hook. He felt he was losing his mother, or most of her affections were directed elsewhere. 2) in a rage he decided to stop that positive thing from ever happening again— killing his mother, and then numerous children. It remains to be seen whether he also killed himself, but perhaps he did.

I want to return to a few points. Sometimes in the wake of such a massive tragedy as happened this week, people have a sense of helplessness, a feeling that nothing at all could have been done to prevent it. This however is not quite true, as I will speak to in a minute. But one of the reasons so many people are bewildered about this is that they simply do not understand either human fallenness or mental illness.

Sin, in itself, is inherently illogical and self-destructive as well as destroying others. You can’t rationally explain the irrational acts of fallen persons. They fall into the category of ‘senseless and inexplicable’ acts. Sometimes, as with the psychological theory mentioned above, we can come up with an explanation for why the mentally ill act as they do, but it provides no solace or comfort to those who lost their children this week. And of course the shock in part comes from where this tragedy occurred— in small town USA where most of the people knew each other, and many of them actually cared about each other. It is easy to be lulled into a false sense of security in such places. But if it can happen in small town Newtown, it can happen anywhere in America.

Sometimes to cure a pernicious condition it takes strong medicine. Here are some of the things that could be done to help inhibit if not prevent such tragedies in the future: 1) we do indeed need stricter gun laws, especially in regard to the availability of clips that fire multiple rounds of bullets and the guns that are used to do the deed. There is a bill now stalled in Congress that needs to be enacted. It deals with the availability of such bullet clips to almost anyone; 2) parents who have mentally ill children should never ever have guns in their homes. Never. The mother of Adam was a gun enthusiast. Indeed, she took her mentally imbalanced son to target practice! This was akin to offering matches to a pyromaniac.

Furthermore, we need to rethink entirely how we deal with the mentally imbalanced who have already shown signs of being dangerous to others and themselves. In my childhood, most such persons were already institutionalized for the good of everyone. I don’t know whether this is the best solution, but in a very sick, sadistic, violence prone society we need to think hard about these very matters; 3) like it or not, we need to install full time police officers in our schools, complete with flack jackets and weapons. Had there really been such a person at Sandy Hook who was on the job and patrolling the halls, some of this tragedy might have been prevented.

But we are also going to need such persons in places like malls, movie theaters etc. places where large numbers of unarmed persons congregate. This is no time for the cry of more vigilantism, more ‘let the private citizens bear arms in public and do their own Rambo thing’ stuff. In the past, and in the present, this usually leads to more innocent people being killed and lots of self-inflicted wounds. The facts don’t lie about this. Private citizens are not usually trained professionals when it comes to the safe use of fire arms. Perhaps there could come a day if we could get enough AK 47s and multiple round clips off the public market that we wouldn’t need more police presence in public places, but sadly that day is not now.

And lastly here is where I say we all have a responsibility to do something about this tragedy. This event hopefully will be a tipping point for legislative change and more sensible dealings with the deranged and the wicked. And more protection for our children. Sadly, unlike the Holy family in Matthew, none of the parents in Newtown were warned in a dream to get the heck out Newtown the night before this all happened. One of the surest ways for us to continue to have Columbines and Auroras and Newtowns is for good people to sit around and do nothing to change the gun culture, the culture of violence and illness in which we marinate every day. Most of all, we need to pray hard for a revival in this country that changes the sick moral character of so many of our citizens, because as Jesus said— the ultimate source of the problem when it comes to murder, adultery, drug culture and you name it is the human heart. Think on these things.

December 16, 2012 Lord, Don't Let Me Be Misunderstood
Browse Our Archives
Related posts from The Bible and Culture