‘The Betrayal of Trust’– ‘In the Midst of Life, we are in Death’ 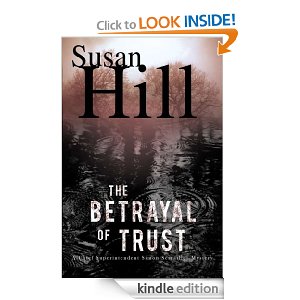 On the whole, British novelists seem to be more capable writers when it comes to murder mysteries or thrillers than, say Americans. One such writer who now has a considerable track record is Susan Hill. There are now six novels in the Simon Serrailler series (a Chief Inspector of Detectives) and while her skill with prose is not as good as say P.D. James or Edith Pargeter (the real name of the author of the Cadfael novels) or Paul Doherty, she is plenty good at writing page turners with good plots and strong characters. Her spare prose facilitates this to some extent.

I have chosen this particular novel to review, in part because my friend Richard Bauckham gave it to me and it is recent, and in part because it deals with a delicate ethical issue— euthanasia. Should human beings have a right to end their own lives, say because they have dementia or motor neuron disease? In fact, in this novel there are two characters which suffer from these conditions Olive from dementia, and Joceylin from MND. The story revolves around their plight, but it also focuses on two cold case deaths (the skeletons of which women were unearthed by a recent flooding of the town of Lafferton) which Simon the detective must get to the bottom of. As Richard Bauckham said to me, Susan Hill is somewhat rare among modern British novelists in that she does not caricature Christians, and indeed has a prominent Christian, Dr. Cat Deerborn, the sister of Simon, as a major character. This too makes this novel a worthwhile reading for a Christian. How should Christians view ‘assisted suicide’ as it is called, in this brave new post-Christian world we live in?

I do not want to give away too much about the story in the novel itself. Suffice it to say it takes a lot to figure out what happened to Harriet Lowther (a teenage girl) and Agneta Dokic (a nanny from what was once called Yugoslavia) whose skeletons were found near each other on the outskirts of Lafferton. Indeed, it takes a lot to figure out whether foul play was involved, which certainly seems likely at the outset. And it seems to always come down to tracking down minute details, seemingly unimportant at the outset, but crucial clues in the end. The plot centers on the very real world situation of how the British economy is now downsizing, people are being ‘made redundant’ (i.e. losing their jobs), and this has affected the police force both in its size and its strength. Simon Serrailler must operate on a shoestring budget, and pretty much on a wing and a prayer. You’ll enjoy the twists and turns of this novel.

But lets consider the central issue in the rest of this post— euthanasia. One thing that continues to amaze me about post-modernity is its incessant and relentless narcissism. It’s insistence on its rights, its entitlements, its own way. The ‘right to die’ movement fits right into that whole milieu hand in glove. From a Christian point of view, as the British would say ‘this will not do’.

In the first place, no Christian should ever say ‘it’s my life to do with as I please’. Of course not. You did not bring yourself into the world, trailing clouds of glory, and your life is not a piece of property you can dispense with as you please. Indeed, what you do with your life has to do with pleasing God, and helping others and this has to do with both your way of living and your way of dying. Though Cat Deerborn does not articulate this in the novel clearly, you can see that her deep visceral reaction to euthanasia is based in her Christian faith, which surfaces at one particular juncture in the story. Put simply, my life is a gift from God, or if you don’t believe in God, at the very least a gift from my parents. As such, I am not entitled to do with it as I please. Something that starts as a gift cannot end as an entitlement.

I have studied at some length the ethical treatments and codes that now inhabit hospital life in America, and there is always a distinction to be made between prolonging the living and prolonging the dying. The former is the task of any good physician. The latter is neither helpful nor necessary if there is no decent prospect of recovery of health. But these things involve complex decisions. For a praying Christian, of course one can put somebody near death in an iron lung and keep their vital statistics going, and then pray for a miracle, but as we all know, miracles are capricious things. Sometimes they happen, and sometimes they do not.

And in any case, the paramount ethical decision is not ‘what is best for someone or someones other than the person who is suffering, but what is best for the patient in question.’ I am not opposed to letting people die, die with dignity, die without extraordinary means of propping up a life that is fading and has little hope of recovery. But that is a very different matter than either a patient or a doctor taking life into their own hands and terminating it, especially when we have plenty of palliatives that can keep a dying person comfortable as they go down their final earthly road.

And there is another thing that needs to be considered. If a person is a Christian, has the gift of everlasting life, there is no purpose or reason to endless prop up life in this mortal frame, this decaying body, endlessly. Sometimes families trapped in their grief cannot let a loved one go, and then strap themselves with huge hospital and treatment debts simply because they did not have a pastor to tell them, ‘it’s o.k. to entrust them into the hands of their Maker now’. Indeed, I would say pastors have something of an obligation to help families make such decisions and not duck them. The chief, and in some cases, sole question to be asked is– what is best for the dying person?

Euthanasia whether self-administered or in some form of ‘assisted suicide’ is in my view definitely an attempt to play God, something we should never do. It is often based in the assumption that ‘my life is mine, and it’s my death as well, and I should be able to do as I please’. The authors of the Bible would disagree. Whilst I see nothing in the Scriptures that suggests suicide is the unforgivable sin, I would suggest that it is the failure of trust in God, the failure to let God be God in one’s life, and those things do amount to a form of sin. It is ‘a betrayal of trust’. Think about these things.

December 19, 2012 The SBL in Chicago- A Potpourri of Things-- Part One
Browse Our Archives
get the latest from
The Bible and Culture
Sign up for our newsletter
POPULAR AT PATHEOS Evangelical
1