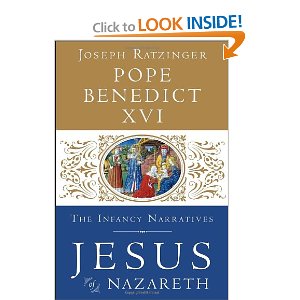 If we were hoping for some comments from the Pope on the 2nd century Infancy Gospels (of Thomas, or the Protevangelium of James for example) we were hoping in vain. He does make a passing comment that he things somethings in them may go back to ‘family tradition’, but he says no more. Instead the last full chapter of his little study focuses on the famous Magi story, and the Epilogue on Jesus in the Temple at 12 (Lk. 2.41-52). In other words, he has basically been proceeding through these stories in a sort of chronological order.

A good point, based on the insights of R. Pesch the great Gospel commentator, is made from the outset– just as Luke uses Augustus as a frame of reference to tell of a very different king who would be the world’s savior and bring a different peace, so Matthew uses Herod the Great, the so-called King of the Jews to tell the tale properly of the real king of the Jews, Jesus.

On the basis of later exegesis of Mt. 2, the Pope points us (p. 91) to the famous prophecy of Balaam that a star will arise out of Jacob, and a sceptre out of Israel (Num. 24.17). He is right that Matthew, who is always keen to make connections with OT prophecy misses this one out in his telling of the Magi story. Of course in the prophecy the star is the king himself, not a sign in the heavens.

In reviewing for us who exactly the Magi might have been (Persian priests, philosophers of a sort, rulers of a distinct religion) oddly enough the Pope leaves out at first the most obvious one— they are star gazers, astrologers. But then finally he talks about Babylonian astronomers, and the conjunction of Jupiter and Saturn in 7-6 B.C. which suggests might be the time when Jesus was born, or at least when the Magi saw the congruences in the sky and headed to Jerusalem. I think it unlikely that harmonic convergence has much to do with Matthew’s star, not least because said star in question guides the wise men from Jerusalem to Bethlehem and then parks itself like a neon sign over the manger. This is not the behavior of planets or stars, but since the agents often thought stars might be angelic beings moving around in the sky, Matthew might have had in mind such a GPS sort of angel. Sensibly, church fathers like Chrysostom said long ago that no star or planet moves like that (Mt. Hom. 6.2 which the Pope cites– p.97).

To his credit, the Pope, pointing not only the historical evidence that there was a historical Balaam who may have made such a royal prophecy, also points out that Suetonius and Tacitus both mention that there was a tradition that was noised about to the effect that a new world ruler would emerge from Judah, an expectation that Josephus thought Vespasian fulfilled after his time in the Holy Land (Jewish Wars 3.399-408).

For the Pope, the wise men would not have set out on an arduous journey unless they had some hope of finding someone or something long promised. So he sees them as a symbol of both science and pagan religion striving towards religious and philosophical truth. He explains that it was because the church read the story of the wise men in light of Ps. 72.10 and Isaiah 60 that the wise men were turned into kings! (96). Of this Matthew says nothing— he sees them as perhaps counselors to kings at best. In any case, they are said to represent the journeying of all humanity towards the Christ (p. 97). It is of course possible, since the Babylonian astrologers did associate big stars (i.e. planets) and their conjunction with kings and nations that they might well read a celestial event as auguring a change of reigns or realms. The Magi then in turn become a foreshadowing of the moving of Gentiles towards the Christ.

Relying on what Colossians says about Christ ruling over all powers and celestial principalities, he suggests that Matthew may be hinting “it is not the star that determines the child’s destiny, it is the child that directs the star.” (p. 101). If that was in Matthews purview, he has not made it clear here. On pp. 102-03 the Pope raises the interesting question of why not only Herod but also all Jerusalem was troubled to hear about the star and its allusion to a new king perhaps. But why? Well the high priest and indeed the priestly apparatus served at the beck and call of Herod who was the builder of the temple, any change in rule could also upset their apple cart as well. The answer the sages and scribes gave to Herod was a combination of Micah 5.1 and 2 Sam. 5.2. Bethlehem as by no means the least of the cities of Judah (which is to say a smaller one could be found, but it was a tiny village in those days) is mentioned and the wise men are off to find what they were searching for, making the six mile trek to Bethlehem. In an interesting aside the Pope draws an analogy between the lively discussion before heard about the theological significance of these prophecies with ” a theology that exhausts itself in academic disputes” (p. 105). Clearly the Holy Father has little liking for that!

The Magi do proskunesis bowing down before Jesus, and give gifts suitable for a king. The Pope mentions the reference to Is. 60.6 referring to gold and incense that Gentiles would place before the God of Israel. The Pope is correct that myrrh however is a spice used in preparation of a corpus (see John 19)….

I quite agree with the Pope that there is nothing implausible about the slaughtering of the innocents story in view of the fact that in 6 B.C. Herod executed two of his own sons he was suspicious about and in 4 B.C. another one (p. 108). The man was paronoid about possibly rivals for his throne and coups. After all he was an Idumean and not really a pure Jew ruling Jews. The Moses Haggadah presents us with a similar story about Moses, but it comes from a later period, and probably did not influence Matthew (p. 110). It is interesting that both in the Moses story and in the Matthean birth narrative the plot is moved along through guidance in dreams, in the latter case dreams that Joseph had which guided him to Egypt, out of Egypt and finally to Nazareth itself.

Surprisingly the Pope enters the lists of the debate about Mt. 2.23 and what OT text could possibly be alluded to. Judg. 13.5-7– the prophecy of Samson being a Nazarite?? Yes Jesus was dedicated to God early on, no he did not abstain from alcohol, but perhaps he didn’t cut his hair? More likely is Is. 11.1– a shoot (netzer) shall come forth from the stump of Jesse… This becomes all the more likely if Nazareth is in fact a city derived in name from netzer– and so branch town, perhaps where Davidic descendants had settled. In any case in Jn. 19.19 above the cross Jesus is called ho Nazaraios. In any case the Pope comes down solidly on the side of the historicity of the Magi story, and approvingly quotes Klaus Berger in the end— “Even when there is only a single attestation…one must suppose, until the contrary is proven, that the evangelists did not intend to deceive their readers, but rather to inform them concerning historical events… to contest the historicity of this account on mere suspicion exceeds every imaginable competence of historians” (p. 119 quoting from Berger’s Kommentar zum Neuen Testament p. 20). The Pope concludes that Matthew is recounting real history theologically thought through and interpreted.

The Pope concludes his story with a reflection in an Epilogue on Lk. 2.41-52. The portrait is of a devout Jewish family going to festival in Jerusalem. Drawing an analogy between the three days that the parents search for Jesus and are bereft of him, and the three days of Jesus in the tomb, the Pope sees this story as foreshadowing the end of the story (pp. 122-23). And Mary is deeply troubled here as she would be later no doubt at the cross (remembering Simeon’s words about a sword piercing her heart).

With keen insight the Pope points out that Jesus rightly stresses that he must be about his Father’s business, in his Father’s house, namely the Temple, and this contrasts with Mary’s words alluding to Joseph being his father. Already there is a must on Jesus’ life in regard to the will of God, even at 12. “He is in the Temple not as a rebel against his parents but precisely as the obedient one, acting out the same obedience that leads to the cross and the resurrection.” (p. 124).

The Pope sees in the response of the family both lack of understanding, but also Mary continuing to ponder the meaning of these things in her heart. And this indeed is what a disciple must do especially when they do not understand something about the Christ. The Pope rightly points out that Jesus is portrayed as something like Samuel when it is said he grows in wisdom and in stature (see 1 Sam. 2.26). The Pope does not shy away from the implications of such a verse— he adds “And yet it is also true that his wisdom grows. As a human being he does not live in some abstract omniscience but he is rooted in a concrete history, a place and a time, in the different phases of human life, and this is what gives concrete shape to his knowledge. So it emerges clearly here that he thought and learned in human fashion.” (p. 127). And this is indeed an appropriate note on which to end this survey, of yet another interesting and very readable book about Jesus by the Holy Father.

January 25, 2013 'The Impossible' Takes a Little Longer
Browse Our Archives
get the latest from
The Bible and Culture
Sign up for our newsletter
POPULAR AT PATHEOS Evangelical
1