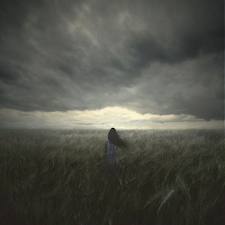 All day my wife had had this sense of dread, a sense that something had gone terribly wrong. The dread had a focus— our daughter Christy, whom we had not heard from for a couple of days. Then came the phone call late at night that no parent ever wants. Christy was dead and gone, felled by an unexpected pulmonary embolism. The thing is, that Ann had carried around the strong sense that it had already happened before it was confirmed.

Then there was the story my old English prof Chris Armitage told me about the dream he had, a dream of his very elderly mother falling and falling. He called back home to the U.K. His mother had just passed away.

These are only two brief stories about premonitions or harbingers. I could recount episodes in my life where I saw something vividly in a dream, and then when it actually happened, sometimes long after the dream there was this very strange sense of deja vu, of I’ve already seen this before.

From a Christian point of view, there are some things to be said about all of this. It reflects clearly enough, since there are hundreds of thousands of stories through the ages like the ones I just told, that SOMEONE knows in advance what is going to happen, and that same SOMEONE sometimes conveys knowledge of this information to persons who have a direct stake in or deep investment in the matter.

I remember well what my friend Tom Wright said to me when I mentioned to him about Ann’s premonition. His immediate response was that we should take comfort in that. I pondered why he said that for a long time. I suppose he was pointing me to the sovereignty of God like a good Reformed Evangelical Anglican should, but what I actually took away from it was that God was seeking to prepare Ann, prepare us both, soften the blow if you will, for the tragedy that was about to unfold. And this led to another thought.

Are premonitions really so different from true prophecies? Think for an instant about what Simeon said to Jesus’ mother— ‘and a sword will pierce your heart as well’, and this only a short time after Jesus was born! What did she make of this very early warning when by rights she should have been celebrating the birth of a first born son? What does it mean that she treasured or pondered this in her heart, reflecting on its meaning?

I would love to hear some of your stories about premonitions or harbingers. I think there is much to learn about God and life from such occurrences. For me, it tells me that God knows all in advance and cares about his people and their suffering. What it does not tell me is that God has rigged everything in advance, or engineered it in some way, unless by that you mean that ‘God works all things together for good for those who love Him…” which I certainly believe.

But God even knows our sin in advance, and he certainly has not willed or pre-programmed that. God is not the author of sin or evil in any way, shape, or fashion. So, we have to live with a certain amount of mystery when it comes to understanding premonitions. They warn us that something is going to happen. They do not reveal the agency by which that happens, or what or whom makes it certain that it will happen. That, is a discussion for another day.

February 21, 2013 The Bear Facts about Friendship
Browse Our Archives
get the latest updates from
The Bible and Culture
and the Patheos
Evangelical
Channel
POPULAR AT PATHEOS Evangelical
1

Legalism vs. Freedom vs. Lawlessness
Cranach
Books by This Author Books by Ben Witherington

Evangelical
The James Gang-- Part One
The Bible and Culture

Evangelical
Who Knew Moses Dealt with Sharks?
The Bible and Culture

Evangelical
Get Back-- The Documentary, and Its Implications
The Bible and Culture
TRENDING AT PATHEOS Evangelical