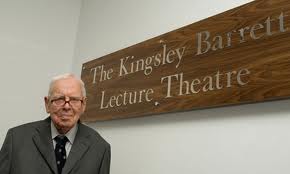 I’ve been doing a lot of reading lately about and by two famous Durhamites— C.K. Barrett, and his predecessor, and in some respects, role model. J.B. Lightfoot. One of the interesting connections is their work rate. They were not afraid of hard work and lots of it. Kingsley, for example, regularly would work from 10-2 in the morning on his scholarly work. In part this is because he was a good family man, and the earlier part of the evening until the children went to bed was devoted to family tasks, including reading Penelope, and presumably Martin, bedtime stories. Penelope remembers Winnie the Pooh being read, quite distinctly. But then, Kingsley would get to work rather than go straight to bed. You got the impression he didn’t waste much time on TV or lots of sporting events.

Then there was J.B. Lightfoot. He had the natural advantage that he decided to commit himself to the celibate life, and he remained that way always. More time for work, both scholarly, and later episcopal work as well. The anecdotes about Lightfoot are plentiful. For example, in his 1981 lecture of Lightfoot in Durham Cathedral, J.A.T. Robinson quoted the following anecdote from Lightfoot’s days as a Cambridge scholar and lecturer:

“Handley Moule (Lightfoot’s successor one person removed at Durham) describes the man’s habits “No one every loitered so late in the Great Court that he did not see Lightfoot’s lamp burning in his study window, though no many either was so regularly present in morning Chapel at seven o’clock that he did not find Lightfoot always there with him.”

Lightfoot apparently didn’t require a lot of sleep. But that is not the whole story. The man worked even while on the move, and even in the midst of vast episcopal duties. And his powers of concentration must have been immense, not to mention his apparently near photographic memory for ancient Greek texts…

Robinson remarks….There are vivid descriptions of Lightfoot being found in a boat or railway carriage with an Armenian or Coptic grammar in hand or calmly correcting proofs while being driven down precipitous paths in Norway….But above all the secret lay in his ability to switch off, giving himself totally to what was before him. As his chaplain ‘J.R. Harmer] put it… ‘His power of detachment and concentration was extraordinary. I have seen him break off from an incomplete sentence for a momentous interview with one of his clergy, give him his undivided and sympathetic attention followed by the wisest counsel and final decision, and almost before the door was closed upon his visitor become once more absorbed in his literary work.”

Often enough in my career, I’ve gotten the question about how I write so much. Well writing comes naturally to me, and I have been heartened by what Lightfoot says about writing, going against the grain of those who insist that before you write you must suffer the paralysis of analysis until you get a brain cramp. People who think like this seem to think they are expected to produce something final, definitive, earth-shattering, when in fact all that is really required is excellence, and something really good or worthwhile for some good purpose.

Lightfoot: — “Begin to write as soon as you possibly can. That was what Prince Lee [his headmaster at King Edward’s, Birmingham] always said to us. This is the way to learn. Almost all I have learnt has come from writing books. If you write a book on a subject, you have to read everything that has been written about it.”

Writing is a key to learning, and vice versa. As for reading absolutely everything that has been written on subject, that’s a bit of rhetorical hyperbole which one can forgive Lightfoot for, in an age before millions of things online on a given subject.

Hard work, perseverance, learning… and having good models or examples to follow. Perspicuity is the chief virtue of a style it has been said. William Sanday (yet another Durhamite who helped write a commentary for the ICC series) once said that what characterized Lightfoot was ‘exactness of scholarship, width of erudition, scientific method, sobriety of judgment and lucidity of style.”

This is my goal as well, and frankly it takes hard work, lots of sacrifices, and persistence… and perhaps most of all a love for truth, particularly finding God’s truth about Jesus and other essential subjects. I have written a whole book on what it takes to be a Biblical scholar, entitled Is There a Doctor in the House? Consider this a supplement to what is said there. 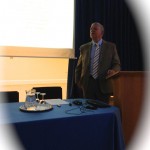 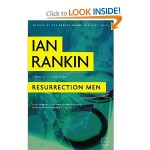 June 30, 2013 The Rankin File--- Resurrection Men
Browse Our Archives
get the latest from
The Bible and Culture
Sign up for our newsletter
POPULAR AT PATHEOS Evangelical
1

Evangelical
A Warning from Jesus to Bad Mouthing Politicians---...
The Bible and Culture

The Lutheran Way of Resistance & the American...
Though Lutherans are accused of submitting uncritically to government authorities, the Magdeburg...
view all Evangelical blogs
Copyright 2008-2020, Patheos. All rights reserved.