Abortion—- What Should a Christian Think about this Issue?

Abortion—- What Should a Christian Think about this Issue? August 16, 2013 Ben Witherington 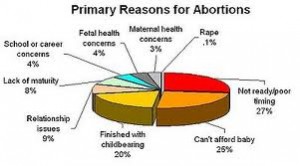 Personal ethical issues like abortion are complex issues. They ought not to be decided by cliches or self-justifying dictums of various sorts, just in case the life of someone in somebody’s womb just happens to be a human being, and not merely a fetus.

Let’s talk the pie chart above for a moment. What it shows is that in America at least, very few instances of abortion are cases where the mother of the child’s life is actually in danger in any way— perhaps 3% or so of all cases in a given year. For the record, I personally think abortions should be available in hospitals to cover such emergency cases. But what we are talking about is rare exceptions to the rule that most abortions have nothing to do with the life of the mother being endangered. You don’t make an ethic out of a rare exception. No, you have an ethic, and then when exceptions arise due to lesser of two evils circumstances, you deal with them on a case by case basis, which should be determined by a doctor and the patient involved.

So much for the issue as it may trouble the medical profession and thus raise issues for medical ethics these days. But what should Christians think? Perhaps it will be useful to eliminate some red herrings.

In the first place, the body that any individual has is a gift from their parents (or in the case of in vitro feritlization from a sperm donor or sperm and egg donors, and a person who gives birth to the child). In other words…… no human being creates himself or herself, and all of us are indebted to the generation that came before us and generated us, at a minimum. In other words ‘no man is an island entire of itself’ and any ethic that suggests this is a bad one, and certainly not a Christian one.

Furthermore, the notion that one can do whatever one wants with one’s body is a myth. For example, you cannot legally or morally use your body to simply kill another human being because you want to do so, even if by human being you simply mean persons outside the mother’s womb. No one has complete freedom to do whatever one wants to do with one’s body. That’s simply absurd.

2) Red Herring No. 2— a fetus is just like other growths in a body, say a tumor, or a cyst, or the like. As such it can be treated as just some tissue that can be excised. It need not be treated as a person. Last I checked, cysts, tumors, warts, moles do not have heartbeats and could never become someone’s child if allowed to gestate properly.

It is simply faulty reasoning to suggest that a pregnancy is simply another sort of problematic health issue which can be resolved by surgery or drugs. It isn’t. Whether you think it involves a human life with potential (as I do), or even just a potential human life, that brings into play a whole higher category of ethical decision making.

3) Red Herring No. 3— ‘A woman should have the right to choose by herself what happens to the unborn child. Really? Without any consultation of the father or sperm donor in question? Pregnancy is not a condition caused by a unilateral action of a woman with no assistance from the male of the species. In the vast majority of cases pregnancy comes as a result of male-female sexual activity, for which both the males and the females should bear some ethical responsibility for the outcome.

4) Red Herring No. 4— ‘If a child is unwanted, then the woman in question should be allowed to abort the child’. The question to be asked about this is—- unwanted by whom? The fact that it may be unwanted by the pregnant woman does not mean in any case that it would necessarily be unwanted by every other potential parent in the world.

Before you could conclude this is an ‘unwanted child’ you would have to be omniscient about the wants and desires of the rest of humanity. And no human being is omniscient. If you actually check out how many people are waiting in line to adopt children, including even AIDS and Crack babies, you will discover you should be ashamed of yourself for ever using the word ‘unwanted’ when it comes to an unborn child. The pregnancy itself may be unwanted, but the child in the woman is not the pregnancy! It is far more than an objectionable pregnancy.

5) Red Herring No. 5— Medically safe abortions should be available as a means of health care. But abortion is not about health care except possibly in the 3% where the mother’s life is actually in danger. Furthermore abortion is itself a health risk! A mother’s life can be endangered more easily by an abortion than by a pregnancy. Indeed, some abortions can make it impossible to ever bear children again!

What I am pointing out with these five listed items is the inherent incoherency of the most basic or fundamental excuses given for having an abortion. And I haven’t even gotten to the positive reasons that Christians should think that that creature in the woman is of sacred worth, is in fact an unborn child, and since it is defenseless and we have all sorts of other laws to protect defenseless children, we should have sufficient laws to protect the unborn as well, hence the recent battle in Texas. 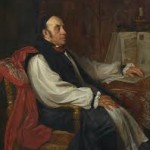 August 15, 2013
Lightfoot on the Veracity and Perspicuity of Eusebius
Next Post 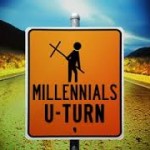 August 17, 2013 What Millenials Want from Church--- Substance not Form!
Browse Our Archives
get the latest updates from
The Bible and Culture
and the Patheos
Evangelical
Channel
POPULAR AT PATHEOS Evangelical
1

10 Questions Christians Should Ask Before...
Theological Apologetics
Books by This Author Books by Ben Witherington

Paul's Idea of Community
Robert Banks is a friend who I met online many years ago,...
view all Evangelical blogs
Copyright 2008-2021, Patheos. All rights reserved.