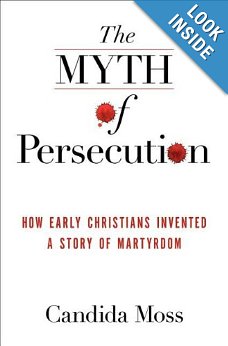 Harper One is especially good at publishing books that can be called ‘provocations’ or ‘pot-stirrers’, or ‘debunkers’. Candida Moss’ recent volume with the deliberately provocative title ‘The Myth of Persecution’ is such a book. At heart, the root of her concern is exaggeration, hyperbole in the accounts of martyrdoms, and perhaps the possible ‘persecution’ complex of various of the earliest Christian writers. In response to this she has trotted out what has become a somewhat standard lament, to wit— ‘yes there were some persecutions, yes there were some martyrs, but the whole thing has been greatly exaggerated (in some cases to promote a sort of ‘cult of the martyrs’), the persecutions were not systematic, were with rare exception not Imperially instigated, were in fact sporadic and regional, and so on, and so on…’

While I am certainly prepared to admit that there is some hyperbole, and even some careless reporting in some early Christian accounts about martyrdom, this certainly cannot be said of all of them, and it especially cannot be said of eyewitness reports, to take one example, the reports of Eusebius of what happened in Palestine, including in his own town, Caesarea Maritima, during his lifetime.

I would have thought that if Moss was going to try and hoist Eusebius on his own petard, that she would have bothered to adequately do her homework on Eusebius, for instance that she would have read the very thorough, very detailed article J.B. Lightfoot wrote on this church father, which is definitely critical in its analysis of Eusebius, in both senses of the word critical. A 40 page hommage to Eusebius it is not.

It first appeared in the Dictionary of Christian Biography (Vol. 2, London: Murray, 1880 ed. William Smith, pp. 308-48) and was much remarked on thereafter by careful historians of the period. Indeed, it became a benchmark for fair and balanced treatments of Eusebius’ work thereafter. The following is a quotation from this article:
“Eusebius was now in middle life when the last and fiercest persecution broke out. For nearly a half century–a longer period than at any other time since its foundation—the Church had enjoyed uninterrupted peace, so far as regards attacks from without. Suddenly, and unexpectedly all was changed. The city of Caesarea became a chief centre of persecution, Eusebius tells us how he saw with his own eyes the houses of prayer razed to the ground, the holy Scriptures committed to the flames in the midst of the marketplaces, the pastors of the churches hiding themselves as they were hunted here and there, and shamefully jeered at when they were caught by their persecutors (H.E. 8.2). For seven years the attacks continued. They were fitful and intermittent. But the suspense and the uncertainty must have increased the horror. No governor stayed his hands; no year was without its sufferers. Almost at any moment, a devout and zealous Christian might be required to do that which his faith forbade him to do even at the cost of his life. Of some of the terrible scenes which ensured, Eusebius was himself an eyewitness; of all he had the full and exact knowledge which is derived from immediate local and personal contact with the incidents. His written account shows how deeply he was impressed with the constancy and the triumphs of the sufferers; of Procopius of Scythopolis, the proto-martyr of this glorious band, who had scarcely passed the gates of Caesarea when he was ordered to sacrifice to the gods, and was beheaded for his refusal (Marty. Poly. ed. Cureton p. 3 sq.)….” and on and on it goes (see pp. 310-12).

In fact it goes on to make clear that Eusebius personally witnessed martyrdoms in Syria, Egypt, and Palestine, not to mention what he knew about the Decian persecutions before the time of Diocletian. This did not happen without precedent, or because Diocletian was a particularly cranky and vicious Emperor. Indeed, it is easy enough to document historical martyrdoms in a wide variety of places in the Empire during the 1rst-4th centuries, starting of course with Jesus, and his brother James, and James Zebedee, and Paul, and Peter……and Antipas (in Revelation)… and… and…and…

Moss’ work is symptomatic of the larger attempt to reinvent and rewrite early Christian history, in short to do revisionist history, at both the scholarly and popular level (remember the Da Vinci Code?). It can be seen in the recent documentary on the life of Nero on the BBC which entirely failed to mention either: 1) Nero’s well-documented scapegoating, persecution, and execution of Christians after the fire in Rome in A.D. 64, and 2) or the persecution of Jews—the show being also entirely silent about the Jewish War which began in Judaea before Nero died.

There are several factors that seem to be consistently underplayed or minimized by Moss’ book: 1) the fact that once Christianity emerged from Judaism it no longer had the protection of being consider a licit or legitimate religion. Indeed, it was dubbed an eastern superstition and as such could be subject to all sorts of abuse in one province after another. For the record, the facts suggest this happened in several provinces in what today we call Turkey, as well as in Africa, and in Palestine, Syria, Egypt etc. It was not merely local, and yes it involved Roman officials all too frequently; 2) the rise and spread of the Emperor cult beginning in the first century A.D. made matters all the worse, when Emperors began insisting on at least token worship as a pledge of allegiance (see Pliny’s famous letter to Trajan).

Anyone who wants to get a fairer estimation of the degree of persecutions in early Christian history should read Lightfoot’s Apostolic Fathers, as well as the aforementioned article. The fact that persecution was not systematic in the Empire nor continual in no way nullifies the facts that it was all too frequent, all too widespread, and all too government or governor sanctioned.

In the case of Candida Moss’s recent book, it’s certainly very engaging and interesting and well written. But at the end of the day, she is guilty of the very sin she accuses the early church fathers of—- exaggeration, in some cases, probably gross exaggeration when it comes to downplaying the persecution and martyring of early Christians.

There was more than enough persecution of Christians in the first four centuries of Christian history for them to be well and truly concerned about the matter, even if sometimes they were prone to coloring outside the lines of the strict facts about what happened.

Thus, there can be no justification for entitling a whole book about this subject ‘The Myth of Persecution’. It would be in fact easier to write a response book using the same data and entitle it ‘The Myth of Non-Persecution’. As it is, Moss’ book reads like special pleading, like a deliberately tendentious under-reading of the data.

The problem with having a bee in one’s bonnet about something, is that the owner of the bonnet is the one most likely to be stung by one’s own bee! I fear this will be the case with Moss’ latest offering.

August 22, 2013
Clues to Understanding the Book of Revelation
Next Post

August 24, 2013 A Festschrift for Moi??? A Very Nice Surprise
Browse Our Archives
Related posts from The Bible and Culture