“The past is like a foreign country, they do things differently there”. This is all too true, and far too much of the trouble with modern interpretation of the Corinthian correspondence today has to do with what I will call bad visualization. So as something of a corrective here are some schematics of what Paul’s Corinth, around A.D. 50 will have looked like. 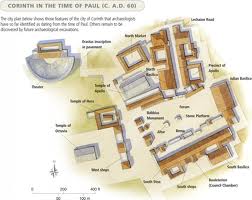 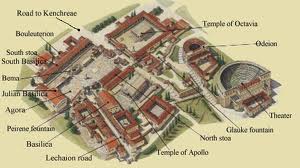 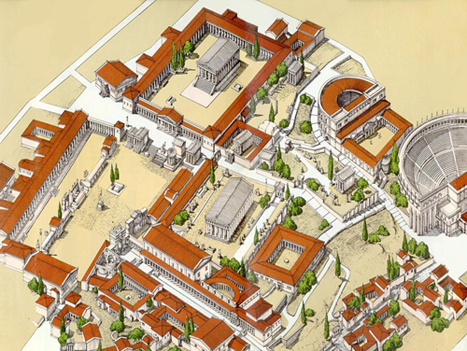 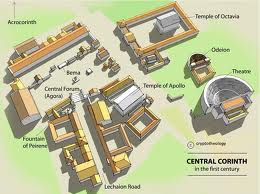 What these schematics (mostly found in guide books on Corinth or study Bibles) have in common is they represent ROMAN Corinth. The ancient city had been destroyed about 144 B.C. by a Roman general, and thanks to Julius Caesar the rebuilding began about 100 years later. The city Paul knew was a Roman colony city which meant it had a layer of Roman government and structure overlaid on the basic Greek town. The official language of jurisprudence and inscriptions was Latin, but most everyone spoke Greek. Corinth seems to have had a basic population of about 50,000 plus when there was not an influx of tourists for the bi-annual Isthmian games But with its double seaport, it was also the port of call of choice for all trade going either east west or west east, including especially the slave trade. Corinth was the epicenter of Roman slave trade. Like most Roman cities, 95% of the wealth was controlled by the top 5% of society, which is to say mostly by Romans living in Corinth, who were the descendents of soldiers who were given land and title to settle in Corinth and help make and maintain it as a Roman colony city. There were some uber-wealthy people in Corinth, wealth made from all kinds of trade, including the slave trade (see 1 Corinthians 7). In our next post we will say more. 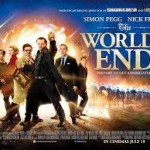 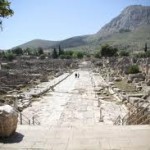 September 16, 2013 Visualizing Paul's Corinth-- Part Two
Browse Our Archives
get the latest from
The Bible and Culture
Sign up for our newsletter
POPULAR AT PATHEOS Evangelical
1

The Institutions Americans No Longer Believe...
Cranach
Books by This Author Books by Ben Witherington

How Christianity Invented the "Person"
The word "person" derives from the Greek and Latin word "persona," which...
view all Evangelical blogs
Copyright 2008-2021, Patheos. All rights reserved.