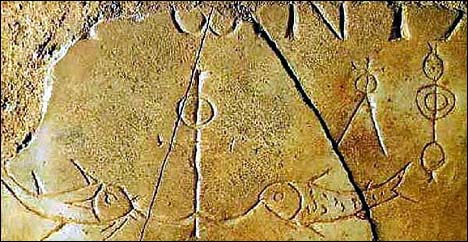 I’ve just returned from a mini-conference held in Oslo, “Between Image and Text: The Early Medieval ‘Iconology’ of Graphic Representational Signs.” As the title suggests, the participants were pretty much all people with expertise in the medieval period . . . with me being a conspicuous exception! But the principal investigator of the funded research programme behind the conference generously invited me to contribute from within the limits of my own competence, thinking it helpful to have some input from my own very early period of Christianity.

My paper was on “Early Christian Writers on Christian Symbols,” and within the time allotted I focused on Christian texts of the late second and early third centuries. In these texts I was able to find references to the Christian use of the cross-symbol (typically referred to as having a T-shape in these early texts), fish-symbols (sometimes symbolizing Christians and sometimes Jesus), the acrostic of the Greek word for “fish” (ΙΧΘΥΣ = “ichthus”, representing “Jesus Christ God’s Son Saviour”), and the (good) shepherd image.

I am very conscious of largely gathering and underscoring data noted by numerous earlier scholars, and so I make no strong claim to originality. But in the earlier publications that I know, these texts and images tend to be slotted in among a wider number of such things and under the broader category of early Christian symbols. I was concerned particularly with the chronological question of what symbols we have mentioned in our very earliest extant texts. These include Justin Martyr (1 Apology, Dialogue with Trypho), Clement of Alexandria (Strommata, Paidagogos), Epistle of Barnabas, Tertullian (Contra Marcion, Ad Nationes, On Baptism, De Corona, Ad Uxori, On Modesty), Minucius Felix (Octavius), Origen (Commentary on Matthew). I also considered the famous inscription of Abercius that makes reference to several of these images.

I noted that all of the images/signs in question are adapted from pre-Christian usage. So the early Christians appropriated them and essentially assigned to them their own distinctive meanings and associations. One might see this as indicative of a lack of creativity, I suppose. But personally I prefer to think of it as indicative of a broader trend in this period in which Christians boldly claimed a wide spectrum of pre-Christian concepts, traditions, and items for their own re-signification. This, I suggest wasn’t a lack of creativity, but instead represented their view that the world belonged to their God and that this God’s purposes could be detected and expressed in a variety of things from it.

Also, however, these early symbols all had a somewhat mundane and inoffensive association in their pre-Christian usage. The cross-mark, for example, typically had a rather utilitarian function, such as marking places in a text, or an “apotropaic” function (to ward off evil). Fish served typically as decorative motifs in mosaics and paintings. And the shepherd image (typically with a sheep or ram across his shoulders) is attested for several centuries before Christianity, apparently serving as a symbol of philanthropy or humanitarian concern.

So, this meant that Christians didn’t have to do much “disinfecting” of the images. Instead, they were able essentially to give them a new and special meaning for their own “in group”. It also meant that in that early period when Christians and Christianity could sometimes be a controversial matter, Christians could use these symbols (e.g., on their grave sites) and outsiders might see them simply as decorative. But Christians (insiders) could see in them their own special meanings.

I don’t know how much my presentation really informed the knowledge of the other conference participants (all of whom seemed impressive). But I learned a good deal from their various papers. 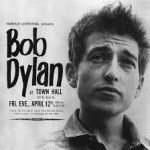 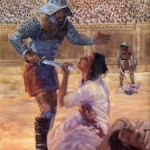 October 8, 2013 Clayton Croy on Moss' Misrepresentation of Early Church Martyrdom
Browse Our Archives
get the latest updates from
The Bible and Culture
and the Patheos
Evangelical
Channel
POPULAR AT PATHEOS Evangelical
1