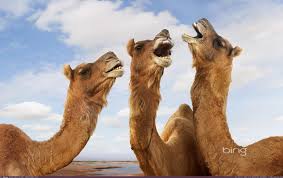 There is a recent archaeological report about camels, or the lack thereof in the Holy Land. John Noble Wilford of the NY Times has a recent article about the findings which can be found here—-http://www.nytimes.com/2014/02/11/science/camels-had-no-business-in-genesis.html?ref=science&_r=0″ title=”Camels”. The findings include the deduction that because evidence has not yet been found for camels in the Holy Land prior to 1,000 B.C. therefore they likely were not part of the economy in that Land before then, and also therefore, the reports in Genesis of Abraham and others having camels ‘must be anachronistic’ reflecting the fact that those accounts must have been written at a much later period of time, not in the 2nd millennium B.C. There are so many problems with this sort of thinking that I find it staggering that good archaeologists from Tel Aviv University and elsewhere could say such things.

It never ceases to amaze me how some scholars think that ‘absence of evidence=evidence of absence’. The fact that we at present can find no remains of camels in the Holy Land going back further than the time of King David proves nothing about the preceding eras. Nothing! Hardly 1 percent of the Holy Land has been archaeologically excavated. One cannot argue that nothing could have existed before 1000 B.C. so far as camels are concerned without having a reasonably comprehensive knowledge of all relevant sites from before that period. In fact not even famous sites like Bethel or Schechem have been fully excavated. All we can say is we now have evidence camels were used as far back as King David, which is useful to know.

And to then conclude further that Genesis must reflect considerable anachronisms based on this limited archaeological work is simply bad scholarship. We do not know this. We simply do not, nor is there any clear evidence to justify such a confident conclusion.

This whole matter reminds me of those anthropologists who used to confidently conclude that religion must have arrived after civilization had been going for a while, after village life had started and people were sedentary, due to the beginnings of agriculture, and needed some help to get along with each other, and to placate the gods of the crop cycle.

Unfortunately for such confident pronouncements the excavations at Gobeckli Tepe in Turkey have shown us a religious sacrifice site, a high place, that dates back to at least 8,000 B.C. or before, long before real village life seems to have existed. As it turns out, religion is not a late add on to civilization, human beings have always been very religious, with religious sacrifices and burial rites as far back as we can trace them. Real archaeological work can disprove a negative, but it has a harder time proving a negative conclusion like ‘camels didn’t exist in the Holy Land before the time of David’. So perhaps Abraham did or didn’t have camels. Perhaps he even ‘walked a mile for a camel’. But we will not know this on the basis of this sort of reasoning from very limited evidence. In fact I’m prepared to say its easier for a camel to pass through the eye of needle than it is for an archaeologist to successfully prove a negative about conditions in the Holy Land 4-5 millenia ago.

February 28, 2014 Joni Mitchell-- An Interview for the Ages
Browse Our Archives
get the latest from
The Bible and Culture
Sign up for our newsletter
POPULAR AT PATHEOS Evangelical
1

The Great Reset Is Coming!
Roger E. Olson
Books by This Author Books by Ben Witherington

Evangelical
An Unconventional God-- Part Nineteen
The Bible and Culture

Evangelical
An Unconventional God-- Part Eighteen
The Bible and Culture

Evangelical
An Unconventional God-- Part Seventeen
The Bible and Culture

on the Advent of Hope
Many blessings to you and yours this Thanksgiving and Christmas season!  The...
view all Evangelical blogs
Copyright 2008-2020, Patheos. All rights reserved.