Wright’s Paul and the Faithfulness of God– Part Fourteen 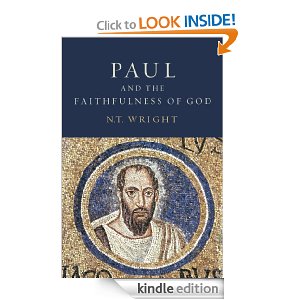 As it turns out, the real radical Reformation did not take place shortly after Luther (and in reaction to him). No, it happened in the first century when Paul revamped the whole symbol system of early Judaism. When someone reorients and reinterprets things like Temple, Territory, Torah, Prayer, Family, Battle etc. then they are messing with the vital parts of an ancient religion, not merely its thought world, but its praxis. So Wright correctly points out how different prayer looks in Paul’s letters– its not said to be a set times of day, its not said to involve a particular geographical orientation (pray towards the Temple in Jerusalem where God is said to dwell), it is not said to involve a set or rote prayer. Rather Paul says pray at any time and all the time, pray without ceasing, pray to the Father through the Son, pray at all times through and by means of the Spirit, and so on (p. 365). This entails a major modification of ancient Jewish monotheistic praying, not to mention the modification of the Shema in 1 Cor. 8.4-6 as well.

And as for God’s promise of land to Abraham, more specifically the promised land, now the territory talked about is the whole world, and what is said is that the kingdom of God is coming everywhere, and in due course will occupy everywhere. Paul is not much interested, if at all, in some future giving back of eretz Israel to God’s first chosen people. Instead of the Redeemer coming to Zion, instead he comes forth from the heavenly Jerusalem, the heavenly Zion at the end to turn away the impiety of Jacob, whatever his street address. Paul’s whole mission to the Gentiles was all about the fulfilling of this promise to Abraham, not merely that his descendents will be a light to the nations, but that the nations will wake up when that light comes and embrace it. Paul speaks of fulfillment of the central symbols of Judaism. And as Tom puts it “Paul’s point is not that there was anything wrong with the original promise or symbol. Far from it. When you have arrived at your destination, you switch off the engine and park the car, not because it has not done its proper job, but because it has. It is eschatology, not religious superiority [much less supercessionism] that forms the key to Paul the apostle’s revision of Saul of Tarsus’ symbolic world….Paul has… replaced the solidarity of Israel and/or his group of the ‘pure’ within Israel with the solidarity of the people of God who find their identity ‘in the Messiah’. ” (p.367). Not accidentally, this is also why in Romans 10 Paul talks about Christ being the end of the Law, in the sense of the end of the Law or Mosaic covenant.

When it comes to the enemies of God’s people, they are no longer the pagans, but rather the powers and principalities, the spiritual forces and Satan. The fight is not against flesh and blood, and its not against the Romans or any other conqueror. Furthermore, the fight is against the Devil’s tools and lures– sin and death. The battle is fought with life, forgiveness, love, good news, faith not with literal weapons (see Ephesians 6.10ff). Zeal has been totally redirected in the life and writings of Paul, but there is still plenty of zeal.

March 1, 2014
Wright's Paul and the Faithfulness of God-- Part Thirteen
Next Post 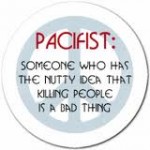 March 3, 2014 The Case for Non-Resistance-- Part One
Browse Our Archives
get the latest updates from
The Bible and Culture
and the Patheos
Evangelical
Channel
POPULAR AT PATHEOS Evangelical
1