The Monuments Men— The Book by Robert Edsel 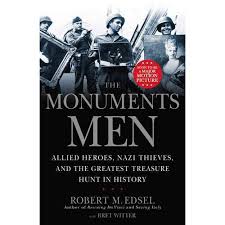 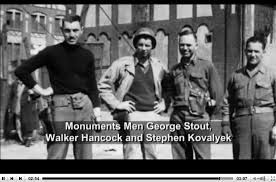 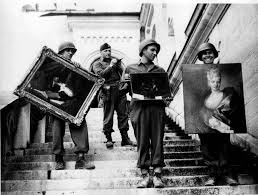 Fortunately, it has been rare in my life when I have been confronted with the face of extreme human evil. There have been a couple of times in my life, and it made me extremely uncomfortable. When you read the true story recounted by Robert Edsel (with Bret Witter of Louisville) you are slapped in the face again and again by the true fallenness of humankind, but also its capacity to act bravely and self-sacrificially. A careful reading of Monuments Men makes very clear that the old adage “all people are basically good” just isn’t true. Naive optimism about human nature receives a death blow when one sees the real extent to which Nazi greed and evil could go.

It wasn’t enough to exterminate 6 million Jews. No the attempt was made to steal all of their achievements, accomplishments, treasures, to the tune of millions of works of art, furniture, clothes etc. Reading a book like this, full of detailed facts about the matter can either make you weep, or sick, or both. Or, it can just be extremely sobering. In my case I found it to be all of these things, and in addition an enlightenment.

The movie had a light touch. The book is heavy……but wonderfully written and has numerous pictures. The pictures do as much to bring home the reality of the wickedness as anything—- thousands of works of art and artifacts stored in a salt mine in Merkers, or Altaussee or in Mad King Ludwig’s castle Neueschwanstein. More than a million pieces of art stolen from the private collections of Jews and others in France, Belgium, etc. As it turned out Mad King Ludwig was not nearly as crazy as Hitler and his devotees. They thought they could have it all, not merely in the ‘to the victor belongs the spoils mode’ but even to the point of erasing the memory of Jewish lives and accomplishments. But perhaps we should not let them off the hook by using the word crazy, when we are talking about logically planned systematic evil.

Fortunately, the book, as the title suggests is about the happier side of the story. It’s about the recovery of what was stolen, and its eventual return if possible to the original owners. The tale is a dangerous one, a heroic one, and the movie only scratches the surface. Indeed, it sometimes compresses the story too much, and of course changes the names as well. But such changes were necessary to make a good movie.

About Edsel’s research, it is clear he was very thorough. Not only does he cite primary source documents repeatedly– official documents, diaries, letters, orders etc. he backs this up with first person accounts of events, carefully footnoted. This is the way history should be written, not merely relying on second hand materials. Indeed, as his other publications show (about the rescue of art in Italy by Monuments Men) there was a huge story to be told, and one book was not enough. I would hope that history teachers in public schools would use excerpts from the movie and assign the book, as an interesting and mostly neglected angle of incidence into the study of WWII.

The word of George Stout played by George Clooney that strikes home most clearly is this— “you can burn a person village down, kill their relatives, and leave only smoldering ash, but if you steal their accomplishments, their achievements, their art, you have stolen their history, and it is as if they never existed”. Full marks to the U.S. Army’s insistence that this should happen to our European friends. The work of the Monuments Men was nothing short of heroic. It was under-funded, under-reported, under-appreciated, and even after the war, it took a long time before the Monuments Men even began to get their due.

This book made me even prouder of my father, who fought in WWII. It made me proud to be an American, and I am not much for chest thumping. War may be hell, but sometimes little glimpses of divine and human goodness break through the clouds of darkness and evil. One of those rays of sunshine was the Monuments Men. 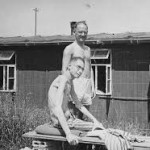 March 23, 2014 For the Love of the Word, for the Love of God
Browse Our Archives
get the latest from
The Bible and Culture
Sign up for our newsletter
POPULAR AT PATHEOS Evangelical
1

Evangelical
What Did the Cross Accomplish?--- Wright, Gathercole, and...
The Bible and Culture
TRENDING AT PATHEOS Evangelical