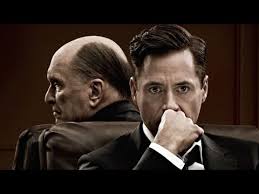 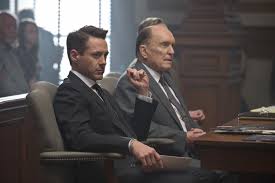 In a year where decent, never mind good movies are few and far between (indeed this may be the worst year in a half century for movies) those of us who love the silver screen are prepared to accept pretty good. And ‘the Judge’ as it turns out, is better than pretty good, because it has outstanding actors in it, playing believable parts. I’m on record as saying I would watch Robert Duvall play Queen Elizabeth if he tried it. He is a national treasure, one of the best American actors ever and capable of pulling off almost any role (well, maybe not Queen Elizabeth). When you add to the mix Robert Downey Jr. Billy Bob Thornton, Vera Farmiga, and an excellent supporting cast, you have a gumbo that is very hard to resist, even if the plot is occasionally hard to swallow. So what is the plot?

Warner Brothers puts it this way—“In “The Judge,” Robert Downey Jr. stars as big city lawyer Hank Palmer, who returns to his childhood home where his estranged father, the town’s judge (Robert Duvall), is suspected of murder. He sets out to discover the truth and along the way reconnects with the family he walked away from years before.”

Anytime you have a courtroom drama, the courtroom scenes better be good, and in this case they are excellent, with Downey sparring with Thornton over Duvall. The family story of the Palmer’s, outside the courtroom, is a bit too melodramatic. Do we really need not only the death of the wife but also a mentally retarded younger brother to create pathos in the film, when the broken relationship between Duvall and Downey Jr. is more than enough to fill the bill?

The setting is in the heartland, Indiana in this case, though it actually looks more like Pennsylvania or even western Virginia. In fact it is mostly filmed in my own wife’s home turf— Attleboro Mass., Plymouth Mass., Dedham Mass. Shelburne Falls Mass., and yes a few scenes in Jackson County Indiana.

The story is of course about two exceedingly bullheaded men, a father and son, one a judge, one a lawyer, whose relationship has always been difficult, believably difficult, indeed so difficult that Judge Palmer put his own son in juvenile detention when he was acting out again and again as a teenager. Somehow, some way, Hank Palmer ends up defending his old man, and kudos to the screen writer for not producing a predictable form-fitting ending. It does however take a bit long to get to the ending (2 hours and 22 minutes), and as various critics have remarked, there are about three places in the film it could have been ended.

One interesting twist is that Susan Downey is the producer of this film, and also the wife of Robert Downey Jr. That must have made for some interesting dynamics when there had to be multiple takes of a particular scene.

I’ve learned something about Downey Jr. in this film— namely he seems to have a hard time crying on camera. There are actually plenty of emotional scenes in this movie, and they often produced tears in the audience, but Robert himself doesn’t seem able to be brought to obvious tears (there is one scene where he bows his head and appears to be crying).

Like many courtroom dramas this one has a lot to do with what is legal more than what is ethical, and it has to do with defending one’s honor and reputation, or sacrificing them for the sake of the truth, and indeed for the sake of redemption. There are many things to like about this film, and it stands out like a diamond in a coal mine compare to a lot of the pure rubbish that is in the theaters this Fall. I hope you will go see it and decide what you think about it. I think Duvall could get another Oscar for this performance and he would deserve it. But—- ‘you be the judge’.

October 11, 2014 Jesus is Lord and Caesar is Not--- Part Two
Browse Our Archives
get the latest updates from
The Bible and Culture
and the Patheos
Evangelical
Channel
POPULAR AT PATHEOS Evangelical
1

Evangelical
Improvisation and Jazz
The Bible and Culture

Evangelical
Lyle Mays and Friends--- the Math of Music,...
The Bible and Culture