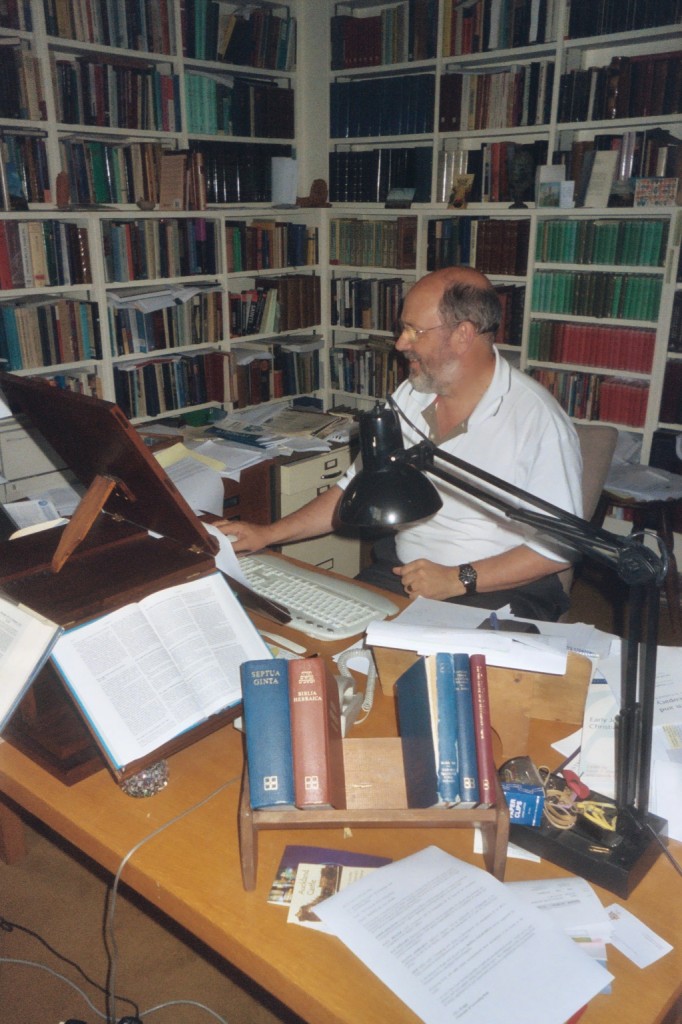 Obviously, one of the three or four most prolific Biblical scholars in the last half century is N. T. Wright. You see him above in Bishop Auckland Palace working on another book, a picture I took when I was visiting with him. The running joke about Tom (which has also been told about me) is that someone calls and asks the secretary for Tom. She replies he is busy writing a book. The caller says, “Well then, I’ll hold”.

One of Tom’s best gifts is his ability to write at all levels of discourse, from the most technical to the very clearest writing for laity, for instance in his series of little ‘For Everyone’ commentaries on the NT, meant to be the successor to the tremendously popular earlier series by William Barclay. You can certainly see the influence of both Barclay and more proximately C.S. Lewis on Tom’s more popular level writing (e.g. see the series that includes Simply Christian, like Mere Christianity). Lewis and Barclay are certain good models to emulate since they were in the 20th century two of the most effective communicators of the faith at the lay level.

Sometimes it has been complained, even recently, that Tom never writes at the highest level of academic writing. I must say this is a very unfair criticism. Two of his very best books, like Climax of the Covenant from earlier in career, and Resurrection and the Son of God from later in his career while accessible to pastors and educated laity are certainly based on detailed scholarly work. A man should not be faulted for writing perspicuously so that not just scholars but others can benefit from it.

What can be said, and should be said, is that sometimes Tom could have used a good editor, for instance in his magnum opus Paul and the Faithfulness of God. There is plenty of good material in the volumes, but there is also too much repetition, perhaps because of following a chiastic structure. There are other books of his which again are rich in content, but clearer were written in haste, in this case as a reply to his uber-Reformed critics. I’m referring to his book on Justification. So many people have taken pot-shots at Tom over the years due to having so much in print that I am impressed with his restraint. That book is, so far as I can see, his only straight-forward rebuttal book.

It is however an odd thing to find someone like me on this blog some time ago, an Arminian Evangelical, defending a Reformed Evangelical against his ‘more Calvinist than thou’ critics. I was happy to do it. Tom and I have been friends for almost 40 years, and we went through our doctoral programs at about the same time in the 70s in the U.K., and were involved at the same conferences at Tyndale House early on.

Tom is not just good at writing, he is certainly a superb public speaker, lecturer, and preacher. I’m especially fond of some of his video work– for instance on Evil and on Resurrection as well. In an age where learners are increasingly visual in orientation, Tom has adapted to the times very well.

In the end, it is quite impossible to single out just one or two of Tom’s books in terms of quality. There are a lot of them, and on top of all that, Tom is a creative thinker as his NT and the People of God series clearly shows. Most importantly Tom is a churchman and a genuine Christian and he is unapologetic about doing all his work in the service of the Lord and of his Church. No Christian should have to apologize to anyone for that.

March 30, 2015 Fear Based Thinking vs. Faith Based Thinking
Browse Our Archives
get the latest from
The Bible and Culture
Sign up for our newsletter
POPULAR AT PATHEOS Evangelical
1