A Week in the Life of a Roman Centurion– a Review 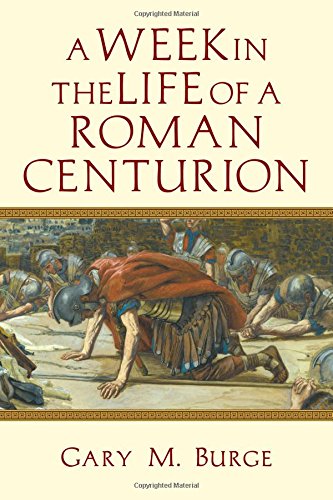 The second volume in the Week in the Life series (IVP,$13.87, 292 pages), the first of which was my A Week in the Life of Corinth, focuses on the life of Roman centurion stationed in the unstable eastern end of the Empire. Appius is a centurion who is profoundly injured at Dura-Europa and ends up in more of an advisory capacity in Capernaum during the lifetime of Jesus. Gary Burge (NT prof at Wheaton) brings to bear his considerable knowledge of the Gospels and their contexts as well as his knowledge of the Roman army and its inner workings to bring to life some of difficulties and dilemmas a centurion would face as he tries to protect the vulnerable eastern borders of the Empire, especially vulnerable due to the Parthians (the successors to the Persians), famous for their war-like ways and their horseback riding archers. The Parthians were indeed the most feared of the adversaries the Romans faced as one got closer and closer to the Tigris and Euphrates. They may even be alluded to in the Book of Revelation.

This volume in the series is simply loaded with detailed information in boxes that helps the reader understand a variety of aspects of the first century world, including just how Hellenized even the Holy Land was in Jesus day, especially in places like Caesarea Maritima and Sepphoris. The Romans might not have been in every village and town in the flesh, but their shadow was long and covered the land like a blanket. There are all kinds of pictures as well as information (see especially the Kindle edition where the pictures come to life much better) meant to help the reader actually interpret what is going on in the story. Some may find the sheer number of these boxes a bit overwhelming as they continuously interrupt the flow of the story right from the outset, but in the end one can skip them or read them later. It’s your choice. What of the story itself?

Gary’s decision to focus mainly on three characters, all part of Appius’ familia (Appius, and his slaves Tullus and Livia) is wise in a novella of this length, as there is not a lot of room for lots of characters or lengthy plot developments. And seeing the action mostly through the point of view of Tullus is interesting, and helpful. In some respects the story could have been called ‘A Week in the Life of a Slave’. Slaves of course were property, and in this case Tullus became a slave due to the misfortunes of war. Gary’s descriptive powers are good, and he has a fine eye for details that matter to the plot. Happily as well, there are very few typos or errors in the whole book, though at one point Pompey Magnus is said to be a Roman general from the seventh century B.C., but this is surely just a typo for first century B.C. My major complaint is that there seems to be too much crammed into this one week in terms of the action, and by the time one gets to Capernaum things really speed up and we even hear ‘during the first month when Appius was in Capernaum’, but surely he is only there for a part of a week if our title of the book is any clue.

There are some nice surprises, twists and turns in the story, and Gary saves some of his ‘reveals’ until just the right juncture in the story to keep the reader interested. I could have wished for a little more development at the end of the book which stops a bit abruptly. All in all, this is a good story, based on good scholarship and it fulfills the rhetorical requirements of good ‘ancient literature’ to both please and inform. This book would work well for a class in NT Intro, or on the Gospel of Matthew, or for that matter for a Sunday School class. We’ll look forward to the future volumes in this series (sneak peak— A Week in the Life of Jerusalem is coming, the week in question being the disastrous one in A.D. 70 when the Temple fell to Titus).

What is Pentecost? Why Does It...
Mark D. Roberts
Books by This Author Books by Ben Witherington

Helen Bond's The First Biography of Jesus-- Part...
BEN: I agree with you that Mark, at most reflects an elementary...
view all Evangelical blogs
Copyright 2008-2020, Patheos. All rights reserved.