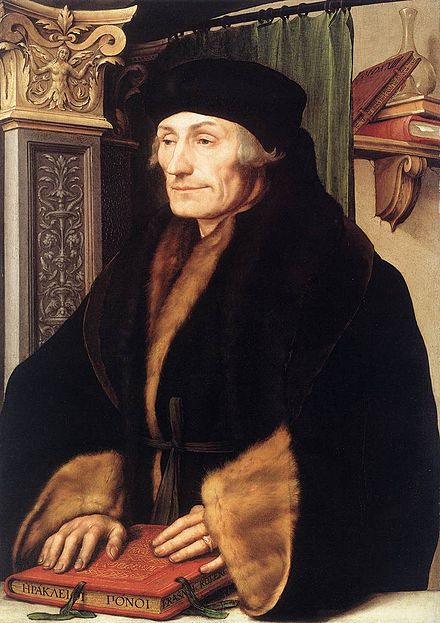 Desiderius Erasmus (1466-1536) of Rotterdam was anything but irascible. He was mild-mannered, loyal to his Catholic Church to the end of his life, and kept his distance from the likes of Luther. He remains important to us today especially because of his Greek NT (1515 first ed. 1522 2nd ed.), which became the main basis other than earlier English translations such as Tyndale’s for the King James translation.

Erasmus accepted Revelation as canonical, despite doubts expressed even by some of the Reformers, and so of course he needed to provide a Greek text of the book for his Greek NT. The problem was, his only copy of a Greek manuscript was missing the very end of the book! The story goes that he pulled out his Latin Vulgate of Jerome, and retro-translated from the Latin back into the Greek the missing six verses. His Greek frankly was better than the Greek of John of Patmos, and as we now know, matched exactly no ancient Greek manuscript of the book.

This might not be of much more than historical import except that the King James Version of the book was based on Erasmus’ Greek translation to a very great extent (see J. Krans, “Erasmus and the Text of Revelation 22.19,” TC: A Journal of Biblical Text Criticism (2011), pp. 1ff.). Here is yet one more reason why no one today should be following the text of the KJV if one really is committed to the principle of ‘text determines canon’ by which I mean, the earliest and best Greek text we can produce should be the basis of any good translation into English.

Erasmus was called the Prince of the Humanists, and with good reason, and he would be singularly disturbed that his text critical work, based on one Greek manuscript plus Jerome at the end of Revelation, should have been seen as buttressing modern fundamentalist attachments to the ‘A.V.’ or as we call it the KJV. In fact, if he knew about this, he might have actually become the irascible Erasmus. Erasmus was for reforms in the Catholic Church but pursued a via media to that end, not accepting the radical rejection of his church by Luther. It is a great irony that his work on the Greek NT which undergirds the KJV translation of 1611 should in our own day be used as a basis for modern radical Protestantism when it comes to sola Scriptura.
Previous Post

September 27, 2015 Oh What a Relief it Is!: Greco-Roman Art at the Art Institute-- Part Two
Browse Our Archives
Follow Us!

An Open Apology to Kaitlin Curtice...
Anabaptist Revisions
Books by This Author Books by Ben Witherington

Evangelical
Biblical Theology-- Wins the Prize!
The Bible and Culture