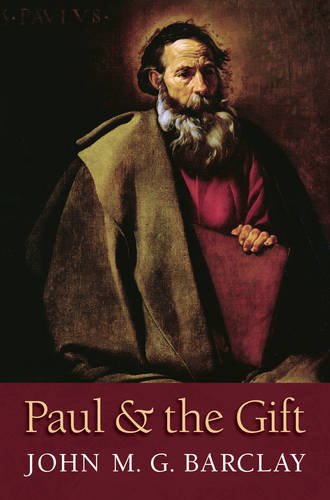 BEN: Let’s talk about the semantic range and nuances of the language of gift or grace in the NT and elsewhere, as you do in your fine Appendix to ‘Paul and the Gift’. One of the things that seems clear enough to me is that some NT scholars want to unnecessarily limit the meaning of the term ‘charis’ and its OT counterparts because of the enormous theological implications of the word in various contexts.

For example, take the OT term HESED, often translated ‘eleos’ in Greek. While I would certainly agree that this term implies a relationship, even an ongoing relationship at times, between the parties involved, and so is social vocabulary, it seems to me to translate HESED as ‘covenant love’ and then define that to mean God’s exclusive love for the elect to whom he had bound himself, does not come to grips with the scope of the meaning or meanings of HESED, and I simply don’t see the evidence that the term cannot also refer to God’s relating to non-Jews, for example.

To give one more example. Victor Furnish, in his famous book on ‘The Love Command in the NT’ says, and here I’m paraphrasing, that ‘God’s love or loving grace is not like a heat seeking missile that finds something inherently attractive in the target. Rather, God’s love or grace bestows worth and makes one loveable. Here again we have what you call the perfecting of the incongruous nature of ‘charis’, whereas, as you say ‘charis’ can refer to something charming in the object of attention, and for that matter ‘agape’ can be used to talk about a relationship where the object of love may have some attractive qualities. Explain, if you will a bit more about why this vocabulary, especially in Protestant discussions of them (less so in writers like C. Spicq), seems to be used repeatedly for a much narrower range of possible meanings.

Yes, we need to distinguish between the meaning of a term and its reference in a particular context. ‘My car’ just means ‘a vehicle I drive’ but in a particular context (when I am pointing to the car I presently own sitting in a carpark) it might mean ‘that blue vehicle over there’. Because certain words come up a lot in certain, similar biblical contexts, we tend to think that they always have that particular reference, as in the example you give regarding HESED, or as in the recent mistaken opinion that ‘God’s righteousness’ means ‘God’s covenant faithfulness’: it does have that reference in certain textual contexts, but the lexeme ‘God’s righteousness’ does not mean ‘God’s covenant faithfulness’ everywhere or outside of those contexts.

Thus also with ‘charis’. As I have mapped in the Appendix, it has three interrelated meanings: the quality of charm/agreeableness; benevolence or the gift/favour given; and gratitude. All of these meanings can be found in the New Testament as well as in wider Greek. The word ‘charis’ itself does not have the specific sense of an undeserved or incongrous gift. It takes on that nuance in Paul but only because it there refers to God’s gift given in the Christ-event. From that basis, and through translation into Latin (‘gratia’) and its interpretation by Augustine, ‘grace’ has taken on the connotations of an unmerited gift, but we should not import that sense into every NT use of the word ‘charis’. The word relates to the domain of gifts, and gifts are normally given (for good reason) to fitting or worthy recipients. There is no reason to think that ‘charis’ = undeserved gift. Only the context can indicate if that is the (unusual) sense required in particular cases.

BEN: Augustine famously did not seem to know much Greek, and based a good deal of his theology on the Latin renderings of the NT and the Bible in general. Talk a bit about Augustine’s use of the terms ‘gratia’ and ‘gratis’ etc. and how that may have affected the way he read the NT. What got lost in translation, in your estimation?

Yes, ‘gratia’ was the normal translation for ‘charis’ in the Latin versions of Paul known by Augustine, and this caused him something of a problem, because ‘gratia’ means favour, and that was ruled out of court in Roman law: judges should operate by justice, and not exercise favour or favoritism (‘gratia’) towards any of the parties in dispute. So what is the just judge of the world, God, doing showing ‘gratia’ to his elect? Augustine wrestled greatly with this problem, deciding that God’s favour is not less than justice but goes beyond what we deserve (which is damnation) for reasons known only to him. Augustine does mix the language of ‘gratia’ with the language of gift (‘donum’ etc.), but because of his influence we have come to assume that the Greek word ‘charis’ has the special theological sense of ‘undeserved gift’, whereas, as noted above, it just means gift/favour. It is only when we see how unusually Paul deploys the term that we can sense what is radical about his understanding of the divine gift in Christ.

BEN: On p. 575 you define ‘gift’ as follows: “Gift denotes the sphere of voluntary, personal relations, characterized by goodwill in the giving of benefit or favor, and eliciting some form of reciprocal return that is both voluntary and necessary for the continuation of the relationship.” I like this definition a lot, and I notice that the word ‘voluntary’ shows up twice in the definition. I would imagine however, that a uber-Calvinistic theologian (e.g. John Piper) would not be happy about that word in a definition of grace, if by voluntary you mean ‘the recipient of the gift could have done otherwise than respond positively’. In other words, a certain kind of theology of predestination, would say that the ‘gift’ and the relationship were predetermined from before the foundation of the universe. Jonathan Edwards, perhaps the greatest of American Calvinistic theologians when he reflected on Calvin and Luther, said that ‘the response to grace is not voluntary (or free) if you mean there was the power of contrary choice involved from the side of the recipient, but if by ‘free’ or voluntary you merely mean that the recipient of grace did not ‘feel’ or ‘sense’ that he was compulsed to do as he did (though in fact he could not have done otherwise), then the term ‘free’ or ‘willingly’ or ‘voluntarily’ could apply. How would you respond to these reservations or even critiques of your definition of gift as applied to Paul’s treatment of the subject? Would you say that the ‘over-determined’ used of grace language in some forms of Protestant theology misses out or deletes or even gets wrong the semantic range of meanings of this vocabulary in the NT?

First, note that my definition is a definition of gift (the domain of human relations as analysed by anthropology and traced in human history) not a definition of grace, if by the latter we mean ‘the divine gift of grace, given ultimately and definitively in Christ’. However, it would be problematic for Paul, as for us, if our response to grace could not be considered in any sense ‘voluntary’ (i.e. truly willed). Note how much he emphasises in 2 Corinthians 8-9 that the Corinthians’ gift (‘charis’) to Jerusalem should be voluntary and not an extraction (2 Corinthians 9.5); otherwise in his eyes it would not be a gift. Now, ‘voluntary’ in Paul’s eyes does not mean ‘free of any external influence’ (see how much effort he puts into persuading them to make this voluntary gift!): he does not labour under our illusion that we can and should act as completely autonomous individuals. But he does expect that God’s work in us generates our own willing (Phil 2.12-13), as freed agents who could do otherwise (it is possible, in Paul’s eyes, to fall out of grace).

What you are touching on here is the tendency, in a line of interpretation from Augustine, through Calvin, to Jonathan Edwards, to ‘perfect’ (radicalise or absolutise) the efficacy of grace, to the point where it causes, constrains, or compels our own wills. This is to turn God’s agency/will and our agency/will into a zero sum game: the more of one, the less of the other. But God’s will is not on the same level as ours, working in the same causal nexus. The better theological model is what one might call non-contrastive transcendance (see the introduction to the volume I edited wtih Simon Gathercole, called Divine and Human Agency in Paul and his Cultural Environment, T & T Clark, 2006). To perfect the efficacy of grace in the way you describe is certainly not necessary, even if it is understandably attractive to some. To my mind, Karl Barth had a much better way of thinking about these things (see the treatment of his ethics by John Webster).

October 22, 2015 The Great NY Churches of Fifth Avenue
Browse Our Archives
Related posts from The Bible and Culture