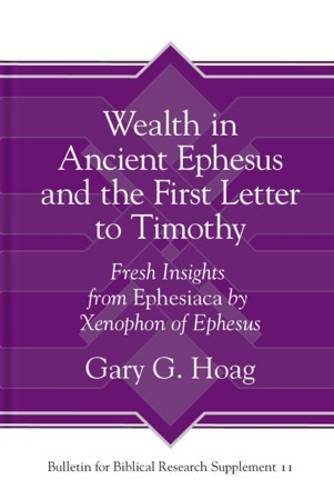 It is not always necessary to write a large scholarly tome to write a good one, and Gary Hoag’s Wealth in Ancient Ephesus and the First Letter to Timothy. Fresh Insights from Ephesiaca by Xenephon of Ephesus (Eisenbrauns, 2015, $49.00, 266 pages), is a good book. It approaches 1 Timothy with an attempt to read the letter in light of its likely social and religious context in a city dominated by its main temple, which was also its main bank and tourist attraction— the temple of Artemis. I am always one to say that if you don’t study the Bible in its various contexts, you’re likely to get things wrong. Gary Hoag is attempting to do just that, following the socio-rhetorical methods of Vernon Robbins, and with some interesting and surprising results. I believe he is right to put his finger on wealthy men and women, now part of the church in Ephesus, that are giving Timothy headaches on various fronts— wanting to teach, wanting to be leaders, bringing various of their social and religious baggage into the church, continuing to mistreat their slaves, and the beat goes on. You will see where we differ on various issues in the subsequent posts where I have a dialogue with Gary about the book.

Here I want to talk about the value of reading NT documents in light of both Greco-Roman and Jewish sources, not just one or the other. The problem of course is that most NT scholars were not, and are not students of the classics first, which makes me a rarity. I did Latin and Greek classics in junior high, high school, and college, and this helped me immensely to be prepared to be a good student of the NT, which after all, is all in Greek, and more often than not addresses people who do not live in Palestine but for whom the Greco-Roman world is their reality. So, when someone finds a Greek document that nobody previously had compared to the NT, and does the hard work of comparing it to a relevant relatively contemporary NT book— this is a good thing. There are some issues with Xenephon’s Ephesiaca, namely it may date to the second century A.D. and the manuscripts we have of it are later than that, but the fact that this work shows up in the popular novel about Chariton for me is the clue that it is probably a first century document written in and for Ephesians, and reflecting their social and religions values. The question then becomes— do these values spill over into church life in Ephesus and create problems, and give us insight into what exactly the problems were? My answer is— Sometimes yes indeed such documents do shed some light. For example, I think Gary is absolutely right that the women in question in 1 Tim. 2.8-15 are high status women who have bling and fancy hairdos and who want to be teaching in the church and play leadership roles, probably before they have even learned Christian teaching properly. Paul responds— ‘I am not now permitting you to do that, be quiet and learn first’. Gary is right that high status persons who played important religious roles in their previous pagan religions would have expected as literate and skilled elite persons to continue to play such roles, only now in the church.

There is much more to learn and commend from Gary’s book about wealth in Ephesus, slavery in Ephesus, religion in Ephesus, but I will leave you to explore the book itself. What follows in the next posts is a dialogue with Gary about the book. Oh, and one more thing. Yes this book is not cheap, but it’s a valuable piece of research. I’m reminded of the old adage— ‘if you think knowledge is expensive, the truth is, ignorance is even more so’. It is a huge mistake to assume that all the stuff you can get free on the internet is just as valuable as what you have to pay for. This is mostly not the case!

February 17, 2016
Hail Caesar! From Commies to Christ, and Back Again
Next Post