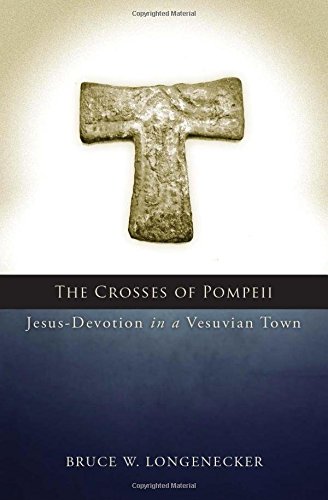 BEN: In the streets of Ephesos, there are also things carved in the street paving stones that people walked on. Famously, there is one which seems to give directions to a brothel in town from the southern agora and port. This evidence might support the notion that things carved in paving stones were meant to be directional in character. I wonder if you have explored other ancient cities like Ephesos for such crosses? Or know of evidence of such from some other person’s scholarly work?

There is also a bas-relief phallic symbol in the main east-west street of Pompeii that points in the direction of a brothel, about three minutes away from the symbol. It is possible that that symbol served as a marketing device with directional force. That’s disputed, of course, since it isn’t clear that it would have been very effective in that role. But even if it did serve that role, that’s a bit different from much smaller and relatively insignificant crosses being incised into paving stones.

Anyway, I haven’t explored other ancient sites…yet. I’m very interested in Ephesus, however. In that ancient city, there are several examples of “the ichthus wheel,” in which the Greek word ichthus (seemingly representing the slogan “Jesus Christ, Son of God, Savior”) was etched into a few street stones, a wheel that simultaneously replicates the shape of the cross. It might be hard to date those data securely, but however they are to be dated, I’d be surprised if those incisions in the ancient streets of Ephesus served a directional purpose.

BEN: I find your theory that the cross marks in the road having some sort of apotropaic function interesting, even fascinating at points, but not wholly convincing. For one thing, shrines at crossroads were thought to be places where certain positive spirits dwelt and protected the residences. That is, the shrines did not have a merely symbolic function for devotional purposes, they were spots where the genii or good daemons would be, protecting those around. But on your theory if I understand you, the crosses are not places where Jesus shows up to do spiritual warfare, you just have a talisman symbol to ward off the evil spirits — right? The second problem I have with your theory is that the ancients did not envision spirits or genii as confined to the same laws of gravity and physics as human bodies are — i.e. they could go through walls, and certainly did not have to walk down streets to get somewhere. Besides these two factors, it would be rather pointless to set up your cross ‘security system’ in one direction or two directions, but leave wide open access through other streets or passageways. I find it much more likely that the crosses are indeed directional markers to, for instance, the bakery where Christians meet. One of the things clearest to me from spending a good deal of time in port cities like Corinth and Ephesus, is that there were lots of transient Christians looking for fellow Christians and where they met, and at least at Izmir at the agora we seem clearly to have some directional Christian symbols to help point Christians to their fellows. We also have the directional graffiti in the paving stones at Ephesus. I don’t accept an explanation that simply says ‘people coming to a significant sized town would have no difficulty finding fellow Cretans or etc. Why not? There were not, so far as we know Chinatowns or ethnic ghettos in ancient Greco-Roman cities. How would you respond to this?

Wow, there’s a lot to unpack there. Okay, first, when you say, “on your theory if I understand you, the crosses are not places where Jesus shows up to do spiritual warfare, you just have a talisman symbol to ward off the evil spirits,” I don’t think a distinction of that kind is helpful. The warding off of evil spirits (in this case, through the power of a deity who himself was resurrected from the grip of evil’s power) is precisely the spiritual warfare that concerned most people in the Greco-Roman world.

And when you say that “the ancients did not envision spirits or genii as confined to the same laws of gravity and physics as human bodies are – i.e. they could go through walls” – all that might be true, but that didn’t stop the ancients from placing protective devises precisely at entryways into their houses. As I point out in the book, anthropologists have long recognized this feature of ancient architecture – the entryways have to be guarded from evil entering through them. That’s why so many shrines appear at entryways into houses – to ensure that suprahuman forces favorable to the household are on sentry duty to protect those inside.

There were other ways of drawing protective power to the entryway of premises. We even know of a Jewish inscription at the entryway of a Pompeii house that served this purpose, complete with a five-pointed star. Evidently some Jews protected their households at the entryway, just as their pagan contemporaries did; they just used different apotropaic devices.

This form of protection at entryways is on display over and over again in Pompeii, and tourists can see them displayed there even today. The most famous examples of this are the mosaics of dogs and other potentially fearsome animals (a wild boar, a wounded bear) in the entryway of Pompeian houses. These were not pictures of beloved animals; these mosaics were thought to tap into the power of the animal spirit as a form of fierce protection against any (human or suprahuman) who might seek to disadvantage the household. This was a common phenomenon in the ancient world.

In Ostia, for instance, a floor mosaic of a phallus greets the person who enters a particular house. This was a way of tapping into what Pliny the Elder called “the divine protection of Fascinus” – by which he meant, the suprahuman power of the phallus that served as the “guardian” against evil spirits (Natural History 28.7.39).

The Pompeii bakery in which one of the Christian crosses was found enjoyed precisely this form of protection directly above its oven – a phallic symbol. Depictions of snakes could do the same, since the beneficial spirit of the snake protected the household. The same bakery that displayed a Christian cross at its entryway also had a snake portrait at the same entryway, and a portrait of the snake next to the oven and near the phallic symbol.

And the same bakery stood the center of a system of crosses etched into the paving stones of a particular neighborhood in Pompeii. The problem with seeing the paving stones as a first-century GPS system (leading recently-arrived Christians to the households of other Christians) is that the data can’t fit the theory, for at least two reasons.

First, in order for these paving-stone crosses to have served directional purposes, we would have to imagine that Christians from beyond Pompeii knew of the symbolic value of the cross as a mark of Christian identity. Now while I’m the first to say that the cross was a Christian symbol long before Constantine (see The Cross before Constantine), I cannot establish that it was a symbol in every sector of Christian community, especially at this very early date. It is quite possible that Pompeian Jesus-devotion was indigenously distinct in this understanding of the symbolic function of the cross. Even if we assume that Christians in Pompeii hoped that visiting Christians would seek them out by finding symbolic crosses in key places, the small crosses in the street stones wouldn’t be necessary at all. The bakery around which the crosses converge displayed a cross openly on its wall. As soon as he opened his shop for business, passers-by could easily have seen the cross symbol there. There was no need for small directional signals in the streets.

Second, there is an inscription from Pompeii that refers to Christians, so they were known by their neighbors. It wouldn’t have been hard for Christians to arrive in Pompeii and ask a fish seller in the Forum if he or she knew where Christians resided or met. “Sure, in the bakery just northeast of the Forum Baths. You can’t miss them. They’re the ones with the funny symbol attached to the wall.” Once that contact was made, other contacts would follow from there.

Together with this, it needs to be noted that the idea that Christians wouldn’t have stuck their neck out to have conversations of this kind (which is not something you’ve postulated, Ben, but is in the air of these kind of conversations) comes from an undifferentiated understanding of the pre-Constantinian world. The assumption behind this notion is that every Christian was always fearful for his or her life, so that directional signals would have been needed to avoid asking for directions to residences of Christians, who wouldn’t have wanted their own neighbors to know of their religious commitment. But the material and literary evidence is pretty clear that such a situation did not pertain to every situation throughout the pre-Constantinian world. In fact, as literary sources tell us, the late 60s and 70s was a time of considerable sympathy for Christians, in the aftermath of Nero’s persecution of them from 64-68 or so. The last decade of Pompeii’s life overlaps precisely with the time when a general tolerance of Christians was in the air – a precursor to the time of Constantine in the fourth century.

So anyway, all this is to say that there’s no need to imagine that these paving-stone crosses were directional markers. They served another function altogether.

July 3, 2016 Bruce Longenecker's The Crosses of Pompeii-- Part Six
Browse Our Archives
Related posts from The Bible and Culture

Evangelical
Your Body-- A Temple of the Holy Spirit,...
The Bible and Culture
TRENDING AT PATHEOS Evangelical