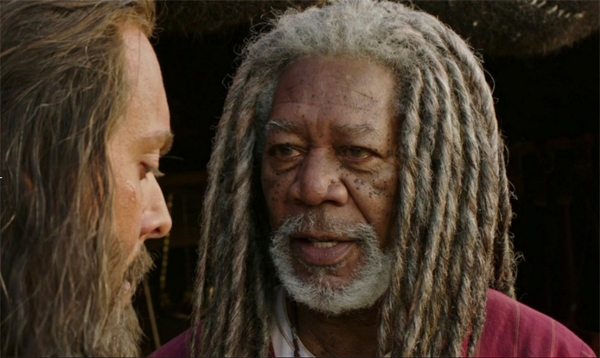 Oh I remember the 1959 film Ben Hur. No child of eight who saw that film could ever forget that climactic chariot race, nor the scenes of slaves rowing a giant Roman galley, nor for that matter the story of a Jewish family that had members that became followers of Jesus of Nazareth, but struggled with the desire for revenge when they were betrayed. It was an epic film in 1959 (212 minutes, starring Charleton Heston in his Biblical epic prime– remember De Mille’s the Ten Commandments). I agree with those reviewers who say that it takes a lot of chutzpah to do a remake of that film, especially while making it almost 90 minutes shorter (the current one clocks in at 124 minutes)! But Roma Downey Jr. and Mark Burnett, who brought us ‘the Bible’ in Reader’s Digest form, as well as A.D. on TV have plenty of guts to be sure.

The back story is interesting in several respects. It is based on a novel by Lew Wallace a Union General in the Civil War who fought at the battle of Shiloh. The novel came out in 1880 and became the most popular novel in America in the 19th century, eclipsing Uncle Tom’s Cabin. The themes of the liberation of slaves, and at the same time of approaching the issues of violence and forgiveness from a more Christian perspective played well then, and we will see how they play at this juncture. There actually have been several attempts to film this story going all the way back to the beginning of cinema in 1907, including a 2003 animated attempt, so there are many competitors. What should we think of this latest effort?

On the plus side, it is beautifully filmed,mostly in Rome and Matera in Italy. Jack Huston and Morgan Freeman as Judah Ben Hur and Ilderim, the African chariot racing mogul, are both excellent in this film. And there is no skimping on the Gospel portion of the film, including the crucifixion, and the clear message that love is more powerful than hate, and forgiveness more powerful than revenge. This is not so much a remake of the 1959 classic as a reinterpretation of the novel, which gives Freeman a lot more of a role to play than in previous versions of the film. On the down side, Pilate is unconvincing, and Jesus, even in the Garden of Gethsemane scene is not a dynamic or convincing figure. Even on the cross he doesn’t generate much pathos or sense that he is even suffering much. On the other hand, the presentation of the brutality of Rome is convincing as is the depiction of a Jewish family of wealth at home in Jerusalem. And the Zealots come across as just as brutal as the Romans, which is correct. And it is precisely that sense of menace and scenes of violence and brutality which makes this movie unsuitable for younger children. What about the climactic exciting chariot race? Well it’s exciting to be sure, as the 1959 version was as well, but it too is brutal with people getting run over by horses. In fact the chariot race is so exciting that the drama of the crucifixion which follows it seems anti-climactic, if that’s possible. And the brother vs. brother sibling rivalry Cain vs. Abel story, between Messala and Judah which is the continual thread throughout the film? Well it has its moments, but the resolution of that struggle is not as satisfying or transcendent as it should have been.

This Ben Hur has a good heart, and some Gospel values undergirding it as well, despite the violence, but it is not a classic. It’s just adequate, with a few good scenes, and 2-3 likeable characters.

August 19, 2016 The Sin of Apostasy-- Hebrews 6 Revisited
Browse Our Archives
Follow Us!

Evangelical
Little Women and Bombshell-- Proto-Feminism??
The Bible and Culture

Evangelical
The Peter Principle-- Part Sixteen
The Bible and Culture

New Foghorn Alert Series
“If there is mist in the pulpit there is a fog in...
view all Evangelical blogs
Copyright 2008-2017, Patheos. All rights reserved.