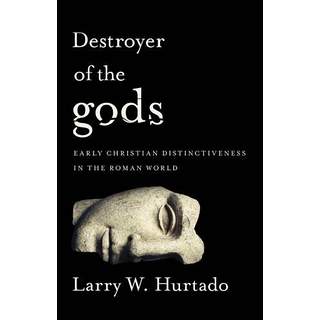 BEN: While many Jews might be prone to see Jesus followers as heretics—defectors from true Judaism especially if we are talking about Jewish Christians, this of course doesn’t explain the strong reaction to Christians by various pagans, perhaps especially a reaction against Gentiles who became followers of Jesus. How would you articulate the character of these two different sorts of negative reactions? What’s the real difference? Were Jews more concerned with orthopraxy vis and vis keeping Torah, and Gentiles more concerned about apparently seditious or socially destabilizing beliefs, or is this too broad a distinction?

LARRY: I think that Jewish negativity toward Jewish adherents of the Jesus-movement was likely for various reasons, sometimes a reaction against their aggressive Christological claims that could be seen as edging on blasphemy perhaps, sometimes perhaps also prompted by the inclusion of former pagans. The demand that pagan converts to the Jesus-movement renounce idolatry created strong social tensions, and Jews may have felt that they would bear the brunt of this, as the early Jesus-movement was perceived as basically an off-shoot of Judaism or even a new Jewish sect.

The negativity toward the Jesus-movement by pagans was likely prompted for the various reasons I discuss in Destroyer of the Gods, such as objections to the perceived anti-religious stance in refusing to honor the gods, and the resultant social disruption this could cause.

BEN: Would it be your thesis that because early Christianity developed as not part of mainstream Greco-Roman religion, that this eventually led, with the triumph of Christianity in the Empire, to the notion that ‘religion’ could somehow be seen as something separate from the rest of the cultural ethos, and definitely separate from the civic politics and official festivals etc. where ‘religio’ was part of the fabric of the city life itself? Indeed, is this what led to the whole notion of ‘religion’ as a separate topic for discussion?

LARRY: From early on in the Jesus-movement, the inclusion of former pagans, and without requiring them to become Jewish proselytes, but requiring them to forsake their previous gods and make their religious practice oriented solely to the one God and Jesus, constituted a novel kind of “religious” stance. Typically in the Roman period, your “religious identity” (to use a modern expression) was tied to your ethnicity, your city, your family, etc. Christians, especially former pagans, however, were to forsake all their gods and yet were to remain what they were as members of their nation, citizens of their city, etc. Unlike proselytes to Judaism (who forsook their ethnic identity and became Jews ethnically), former pagan adherents of the Jesus-movement retained their ethnic identity but were to shed their ancestral gods in favor of the biblical God. So, in our terms, this involved the creation of a separate “religious identity”.

August 26, 2016 Larry Hurtado's Destroyer of the Gods-- Part Seven
Browse Our Archives
Related posts from The Bible and Culture