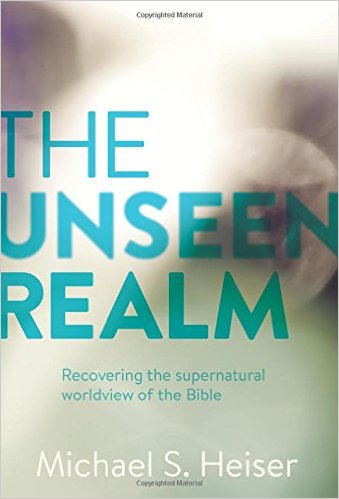 BEN: Mike, first of all, thanks for a terrific read in your book the Unseen Realm. In an age of over-specialization, there are few ‘big picture’ books out there like this one either in terms of doing something comprehensive to describe the spiritual realm and its inhabitants or to try and see how this helps us understand all of Biblical theology from Genesis to Revelation. What really prompted you to write this book?

MIKE: A couple of things. First there was the process of navigating my own shock at the Hebrew of Psalm 82. It’s not a difficult passage in terms of translation, yet at every turn the evangelical OT scholarship I’d grown to depend on fudged the obvious meaning of the passage. That was irritating. I literally had no guidance. But I had to resolve the issue. There I was, in a Hebrew Bible doctoral program at the UW-Madison, two masters degrees under my belt, and five years of teaching biblical studies on the undergrad level, and I’d never seen this text even commented on. In critical scholarship, this was “Hebrew Bible 101” and everyone saw it as evidence that orthodox Israelite theology had initially been polytheistic. But it occurred to me that Jesus and Paul knew the passage, so there had to be an answer, and Jesus had appealed to it in defense of his own statements that he and the Father were one, and that the Father was in him, and he in the Father. Once I got into the topic, which would become a dissertation focus, I began to discover dozens of other things in the biblical scholarship of ancient Israelite religion that bled into each other and the New Testament. I actually felt guilty when I began to put the mosaic together. I thought that it wasn’t fair that scholars get so much out of their Bible but “normal” people never move beyond the milk or pablum because they need to be protected from their Bible. I believed I could make high biblical scholarship digestible to the interested non-specialist, and so the plan for what would become The Unseen Realm was born during my dissertation phase.

BEN: For the sake of those who have not yet read your book, or who have read it but are puzzling over parts of it, summarize for us in a paragraph or two what your thesis is about the divine council of God, and about the ‘elohim’ who are not God, how that should help our understanding of all sorts of Biblical passages ranging from Deut. 32 to Ps. 82 to Dan. 7 to Rev. 4-5. Why do you think this theme in the Bible has been so neglected or overlooked?

MIKE: The divine council is a biblical term, but one often obscured in English translation for fear of polytheism. It basically refers to God’s heavenly entourage who serve him faithfully. All the members of the heavenly host loyal to Yahweh are Yahweh’s council. In the biblical epic, some of them rebel and are no longer part of Yahweh’s bureaucracy. God doesn’t “employ” rebels. He judges them. The notion that plural elohim means polytheism is an academic myth. Critical, non-confessional scholars presume that plural elohim means that the biblical writers were affirming multiple Yahwehs. That’s simply contradicted by the biblical text. We stumble over this because of a language disconnection. When we see the letters g-o-d, we reflexively assign a specific set of unique attributes to those letters. That disallows putting an “s” on the end of g-o-d. But biblical writers didn’t think of elohim that way. They didn’t assign a specific set of unique attributes to elohim. They didn’t see all elohim as ontologically the same. We know this because the biblical writers use the term of a half dozen distinct entities, and yet they describe one of those entities, Yahweh of Israel, as utterly distinct. Only Yahweh is the creator, sovereign, omniscience, etc. The reason elohim can be used of many entities and that you can have many of them is that the term simply denotes a spirit being who by nature is disembodied and a member of the spiritual world. For that reason, Yahweh is an elohim, but no other elohim is Yahweh. Hence divine plurality does not impinge on their being one, unique God. We just have to stop reading an ancient Israelite document through modern western eyes. One of my fondest academic memories came when I read through an explanation of elohim at an International SBL meeting and Nicolas Wyatt, a very well-known scholar of Israelite religion and Ugaritic studies literally shouted “Yes!” from the back of the room. He seemed thrilled someone else had seen this. But if you don’t see it—and evangelicals haven’t—you feel like you have to say silly things like the gods of Psalm 82 are just people to protect your tradition. It’s absolutely unnecessary.

September 19, 2016
Interpreting the Bible in Context---- Arnold and Witherington
Next Post