Paul the Apostle, His Life Letters and Thought– Part Thirty One 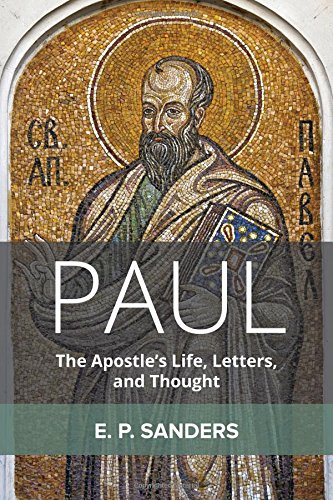 p. 489—With regard to tithing and purity laws it applied only to Jewish farmers who grew food in Palestine. It was a non-issue in the Diaspora, “nor do we know of any purity laws, such as hand washing or immersion that governed Jewish meals in the Diaspora.” This leads to the suspicion that the issue was Jews fraternizing too closely with Gentiles coming into contact with idolatrous practices. “I think this was probably the problem.” He gives the example of Josephus fraternizing with Gentiles on a Gentile boat and then consulting the wife of Nero and talking with a Jewish actor who was a favorite of Nero’s. (Life 13-16). Different Jews had different opinions as to how much contact with Gentiles was too much. [N.B. Paul accuses Peter of living like a Gentile. What does this mean? It means he himself is not or no longer observant of various Jewish practices. So the issue cannot be simply ‘idolatry].

pp. 490-91—Some Jewish men attended Gentile schools in the Diaspora, went to Gentile games in Miletus etc. This involved at least passive contact with idolatry. Sanders argues that Peter needed to be above suspicion as the apostle to the Jews. He must be seen to be a loyal Jew and must be one. Paul accuses Peter of compelling Gentiles to live like Jews i.e. they would have to become Jewish and be circumcised (2.14) and the opponents in Galatia want to compel Galatians to accept circumcision. These are 3 of the 4 uses of the word ‘compel’ anagkazo in Paul’s letters (cf. 2 Cor. 12.11). For Paul the attempt to circumcise Titus in Jerusalem the episode in Antioch are parallel to the problem in Galatia. The issue is compulsion.

p. 493— Notice that sometimes Paul refers to a single opponent in Galatia (3.1,5.7,10). This does not prove it was Peter. Paul does not know the identity of the opponent. These false ones are accused in 6.12 of wanting to make a showing of getting Gentiles circumcised so that they themselves will not be persecuted.

p. 494— Paul says in 5.11 that if he was still preaching circumcision he would not be persecuted [N.B. this surely means he is thinking of Jewish persecutors— see the five references to persecution 1.13,23; 4.29; 5.11; 6.12; possibly Jewish Christians, possibly just Jews in various cases].

pp. 494-95— Sanders makes two conjectures as to why their might be concern by conservative Jews: 1) if Gentiles claimed to be heirs of Abraham and so true Jews they might claim exemption from the military from work or going to court on the Sabbath. Such a claim would lead to serious resentment by Jews 2) Following P. Fredricksen the issue could have involved eschatology. The preaching of an executed messiah combined with a vision of the approach end preached to Gentiles could be seen as seditious, threatening the Pax Romana. “Ordinary Jews did not want these charismatic enthusiasts to give Rome the idea that the Jewish communities in the empire were fomenting social or political unrest. If the Christian movement did bring on a Roman response, the Romans presumably would not differentiate the Christian movement from Judaism, and worldwide Judaism might suffer.” (p. 495).

Paul says even in Galatians that circumcision is nothing nor counts for anything (5.6; 6.15) just as he said in 1 Cor. 7.19 but despite this Paul says accepting it means falling from Christ and grace (5.2-5). [Perhaps the issue here is that circumcision means nothing in the Christian community, but if taken as an entrance rite into Judaism, then it means a lot, it means keeping the whole Law, and so cutting oneself off from the freedom one has in Christ]

p. 496— Sanders however conjectures that the issue is the Judaizers were saying that salvation was not by faith in Christ alone, one had to supplement by getting circumcised and keeping the Law. The issue is ‘compulsion’ to observe the Law. He thinks Paul is saying circumcision doesn’t matter except you are being compelled and I and my Gospel are being attacked. [More likely Paul is saying that the new community of Jew and Gentile united in Christ is a different entity than Israel and runs on different principles].

p. 497— Sanders is right however that circumcision was not seen as a good work or good deed or an achievement. Good deeds are good and compulsion to be circumcised is not. Works of the law are works that distinguish Jews from Gentiles in the Diaspora [I would say this is failing to think big picture covenant difference as Paul does].

p. 498—There is a sharp division in Paul between works of the Law and good works, and emphasizing this is a major point of this book says Sanders.

“the requirement of circumcision for gentile converts to Christianity was not part of the Christian mission from the beginning, and regarding it as essential would invalidate the numerous conversions of gentiles—and, as I have emphasized, Paul’s own mission.”

February 26, 2017
Paul the Apostle, His Life Letters and Thought-- Part Thirty
Next Post

February 28, 2017 Paul the Apostle, His Life Letters and Thought-- Part Thirty Two
Browse Our Archives
get the latest from
The Bible and Culture
Sign up for our newsletter
POPULAR AT PATHEOS Evangelical
1

7 Dubious Takes About Science and Technology
It's Friday, so let's see, are there any takes? One This is...
view all Evangelical blogs
Copyright 2008-2021, Patheos. All rights reserved.
error: Content is protected !!