A Sermon about a Foolish King, who refused to Face the Facts

A Sermon about a Foolish King, who refused to Face the Facts July 13, 2017 Ben Witherington 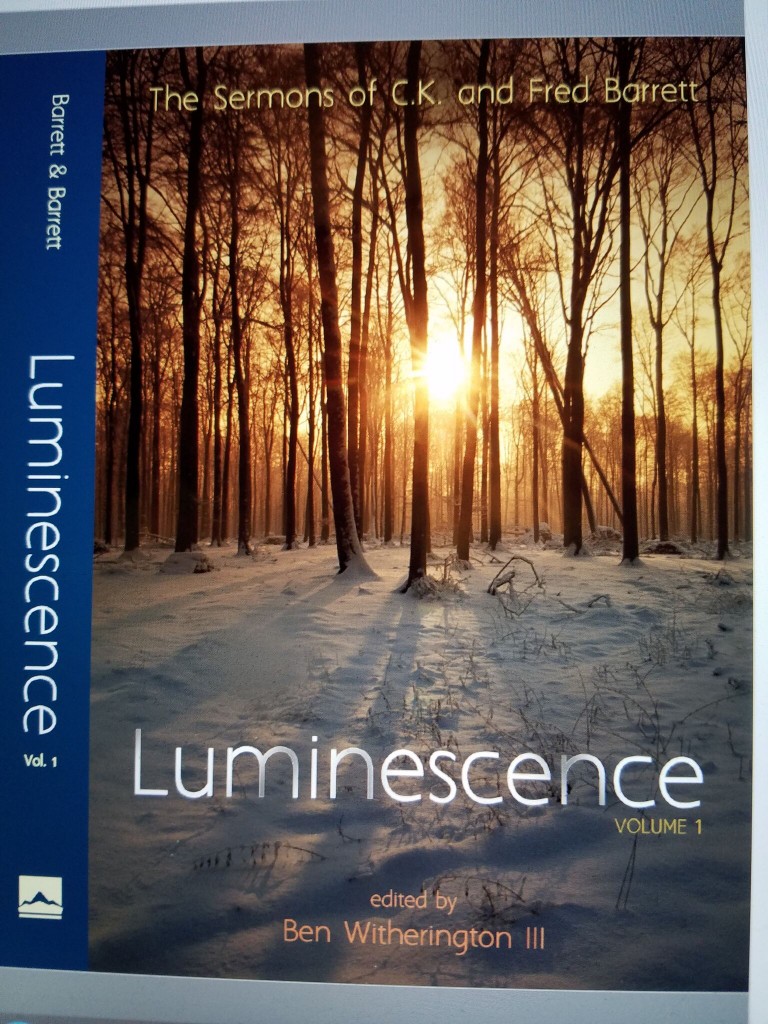 The following is a sermon written by Fred Barrett in the 1920s, which will be one of many in the third volume of Luminesence. It seems in many ways particularly apt for the political season we find ourselves in today. See what you think— BW3

Jeremiah 36.23 “And it came to pass when Jehudi had read three or four leaves, that the king cut it with the penknife and cast it into the fire that was in the brazier.”

It is dangerous to put a penknife into the hands of a child or a fool, for each of them is likely to use it to their own hurt or to the danger of something of value around them. This particular penknife had got into the hands of an exceptionally foolish king and he used it according to his folly. The story is worth telling.
Jehoiakim, the king in question, was the one of the last two kings who reigned in Jerusalem. He was about the worst specimen to occupy the throne. He had all the vices of an eastern monarch and none of the virtues. His stock in trade consisted of a vast amount of obstinacy and bravado. He had a tremendous opinion of himself and just about as much foolishness as a man can well carry. Of real courage, manliness, and wisdom there does not seem to have been even a spark. He was steeped in vice and dragged the nation down with him to godlessness and immorality. In politics, he was a miserable blunderer and did nothing but lead his people to destruction.

The redeeming feature of the times was the fact that Jeremiah, the clear-eyed statesman, God’s prophet, was exercising his ministry. Though the people so resented his honest judgments and his stern condemnations of their sins that he was excluded from the temple and public places and went in danger of his life. Because he would neither flatter nor hide disagreeable truths his tongue was silenced. However, the wrath of men was made to praise God. This temporary and partial silencing of Jeremiah led to a new departure which made the influence of his teaching more extensive and permanent. He was commanded to commit his prophecies to writing. So the restriction of his ministry bore much good—like the imprisonment of Paul, the exile of Athanasius, the incarceration of Bunyan.
Jeremiah dictated the prophecies to Baruch, the scribe, who wrote them down on a scroll. Afterwards Baruch read these words to the people assembled in the house of God. The king was not present but his princes carried the roll to the palace and read it there. It was not a pleasant reading. There was no flattering in it and there was a good deal of straight talk. Jehoiakim did not like it, and it was then that he took the knife and cut the offending columns out of the roll and cast them into the fire, thinking that that would end the matter. It was the end of that particular roll, but not of the awkward truths it contained. Truths cannot be abolished by burning the parchments on which they are written. Now it is time to leave the story and come to the text and the applications thereof. Though I do not grudge the time taken if it has helped us to the right point of view.

THE KING’S PENKNIFE HAS SURVIVED HIS AGE
It has always been a favorite weapon in the hands of those who disliked parts of the word of God. The easiest way out has seemed to be in the destruction of what was unflattering and unwelcome. It is so simple to put down what we do not want to believe as an accretion, a variant, a Babylonian myth, or to say “out with it.” In the same way men have often cut out the passages that were not altogether favorable to their own ecclesiastical position. But it is not only critics and ecclesiastics who are in danger of emulating Jehoiakim’s conduct, and I am far more concerned about the ways in which ordinary folk reflect this folly.
We should not dream of desecrating the material Bible by using a penknife on it, though we often do what is far worse. We cut away, whittle down, its sacred truths if they interfere with our pleasure or comfort. There are commandments which cut clear across our desires—the fourth commandment for example—so we call it a piece of antiquated legislation and out it goes! There are exhortations in the New Testament, calls to repentance and whole-hearted consecration, exacting demands of the Kingdom, that we call local and temporary in their application. Think what a difference it would make if we took the sayings about forgiveness, ceasing from worry, doing as we would be done by, and practiced them instead of whittling them away.

To come closely to our text. The roll contained mainly warnings, prophecies of evil, promises of judgment. Jehoiakim treated them with contempt and used his penknife on them. Perhaps there is nothing in Revelation that today is treated more lightly than the doctrine of punishment. This may be a reaction against an unchristian way of presenting Christian truth, but even admitting that, it does remain true that again and again the Bible rings out the warning that “the wages of sin is death,” that “the soul that sinneth, it shall die.” Jesus taught that as well as Jeremiah. It is still the duty of preachers to sound warnings about truth of retribution. “Knowing the terror of the Lord,” said Paul, “we persuade men.” One gladly confesses that this is not the highest form of appeal. It is higher than to say, “Do right because it is right, and love God because he is God.” But exhortations against sin on the ground of its consequences is part of the Divine message. The preacher who would declare the whole counsel of God must sound the trumpet of warning. What not?

THE WARNING COMES FROM LOVE
God does not cease to be love when he warns of evil consequences. What sort of a world would this be if men might live as they like, and do all the evil they like, and then go free? Caprice and anger have no place in the Divine Being, but His throne is set and men must be judged according to what they have done, whether good or evil. We are part of a settled order and have to face an inviolable law, and it is part of the mercy of God that the consequences of wrong doing are made clear. There was love behind the roll the king burned. “It may be that the house of Judah…may return every man from his evil way: that I may forgive their iniquity and their sin.” God wills not the death of any, even of a man like Jehoiakim. He sends a warning in the hope that he will repent.

Any preacher who is worthy of the name has entered to some extent into the passion of God and must warn men of the penalty that follows sin. The warnings are all the more necessary because of the sophistries that are around us, the deceitful allure of sin, and the siren voices that whisper to our hearts “you shall not surely die.”

FOLLY LIES IN REJECTING THE WARNINGS
What a conceited ass Jehoiakim was! Facts are not altered by neglecting them. Judgment is not averted by refusing to believe in it. You cannot break consequence by burning the paper that states it. The preacher proclaims, “The wages of sin is death,” “God is not mocked,” “We must all stand before the Judgment seat of Christ.” Well, there is no wisdom in saying with derision and contempt that these words mean nothing and are only stories to frighten children with. That is but the same story of the foolish king cutting the roll and burning the words.
The penalties of sin are slow in coming, but the day of reckoning comes. God is patient and long suffering, therefore sentences against evil is not executed speedily, but the inevitable hour creeps on. If you break the laws of health, you cannot dodge the consequences. If you break the law of your country, you pay the price. You may tear your life in pieces, but the debt stands. The lookout man sings out, “Breakers ahead,” you do not abolish the reef by ridiculing his warning, you will go on to destruction. It is foolish to despise the warnings that are given in love. Wisdom is in giving heed, turning from the ways that are leading to ruin.

INCREASED PENALTY FOR DESPISING WARNING
There is an increased penalty for the man who despises his warning. Jehoiakim burnt the roll, but another was written, “There were many like words added.” The fact that we are warned increases our responsibility. “It shall be more tolerable for Tyre and Sidon,” said Jesus, than for the cities that had had the privilege of his own ministry. Added privilege brings added penalty. With all my heart I believe, and with all the earnestness I can command, I preach that: The love of God is broader than the measure of man’s mind, and the heart of the Eternal is most wonderfully kind. It is broad enough to take us all in and kind enough to warn us where we are going wrong. It is His love that shakes us when we are in danger and gives us time to repent.
It is not often I preach on judgment and tell you that unless you repent you will perish. I do it tonight in love. If you reject the warning, the responsibility is yours. It is not simply an arbitrary penalty I declare, and there is nothing unjust in it. Rejection will make you more obstinate, and your continued sin will be against you. Let me beseech you not to play the part of the foolish and contemptuous king. I will show you a more excellent way. A few years before this happened, Shaphan had read a similar roll to Jehoiakim’s father, and it is written “Josiah, the king, rent his clothes.” That was an outward act signifying an inward repentance, and reform and blessing followed. May the warning lead you to repentance and to Jesus, so that you may not hear, and never experience, the judgments of which you are warned.

July 12, 2017
Thought for the Day from Fred Barrett-- On Emotions and Religion
Next Post

July 14, 2017 John Greenlead Whittier's-- The Minister's Daughter
Browse Our Archives
get the latest updates from
The Bible and Culture
and the Patheos
Evangelical
Channel
POPULAR AT PATHEOS Evangelical
1