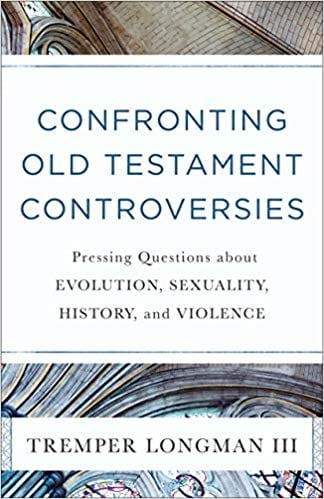 Tremper Longman has written a helpful and important study about some of the most difficult issues the OT raises for Christians. As the subtitle suggests, he will take on the evolution vs. creation debate, the historicity of things like the Fall, the Exodus and the Conquest, the issue of divine violence, and lastly the issue of homosexuality. This is in many ways a brave and also quite traditional book. Tremper’s major dialogue partners will be several other Evangelical scholars with whom he more often disagrees than agrees on these particular issues (e.g. Peter Enns, John Walton, Greg Boyd, Paul Copan to name only a few). He is not interested in or attempting dialoguing with or critiquing the Richard Dawkins of this world who argue that the God of the OT is a moral monster (see p.145). In short, this is a book written for conservative Christians by a conservative Christian with a high view of the inspiration and authority of Scripture (he is happy to use the word inerrancy so long as the Biblical authors are evaluated on the basis of the subjects they intend to address— history, theology, ethics, and not the subjects they are not addressing—e.g. cosmology, geology and in general the concerns of modern science about how the universe works).

One of the real values of this book is that Tremper has labored long in the field of the OT, indeed for many decades now, and he brings that long experience and long reflection on these oft-debated OT issues and texts to this book. When he disagrees with his dialogue partners, he does so without becoming defensive or disagreeable. It is clear however that Longman thinks these disagreements significant, not trivial or minor, and I must say I agree with him about that. His general approach to these issues is from a more Reformed rather than Arminian Evangelical point of view, which means he views the way God exercises his sovereignty a bit differently than I do.

In terms of proportion, the longest two chapters are the ones on divine violence and human sexuality, and it becomes clear that he sees these two issues as perhaps the ones that most trouble or cause questions for conservative Christians these days, and I suspect he is mostly right. Kudos to him for tackling these issues head on. On the one hand, Tremper affirms the Biologos crowd and the notion that science and the Bible need not clash over the issue of creation and evolution. Tremper believes that there really was a historical fall and so we cannot simply make facile assumptions like ‘I was born this way, therefore it’s good and of God’. All of us have experienced fallenness and the flaws, foibles, fallacies, and just plain sin that go with it. You will see in the dialogue which begins in the blog post tomorrow the various nuances on this issue Longman is willing to allow.

The second major chapter is about the historicity, or lack there of, of the Exodus and the Conquest. He says yes to both of these events having a basis in history, though rightly he agrees there is room for debate about when exactly to date these events (1400s or 1200s B.C.?).

The third chapter is in some ways the most detailed and elaborate (pp. 123-205) and here Tremper is drawing on his previous work with Dan Reid (my old editor at IVP, now retired) on ‘God is a Warrior’. I agree with Tremper that we should not try to explain away texts about divine violence, because after all, both the OT and NT is clear about God being the just judge of all the world, and since he is the Creator, he has a right to judge. The question becomes HOW does God judge people, and when and where and by what means? Is there a moral structure to God’s creation such that there are moral consequences to our actions… sooner or later? And how does this whole notion comport with a God who is called Love in 1 John 4? Inquiring minds want to know. How much of the language about divine violence is figurative, and how much should be taken literally? How do the Psalms fit into the picture? The dialogue that follows will try to unravel some of these things.

Finally, there is the vexed issue of homosexuality, which sadly is probably about to split my own United Methodist Church in two. Tremper, rightly in my view, takes the traditional view that same sex sexual activity of whatever sort is prohibited in both the OT and the NT, and if that is true, then same sex marriage is an oxymoron and non-starter as well. Tremper however goes out of his way to suggest that the Evangelical church has done a lousy job in relationship to the LGBTQ folks, and I largely agree. We have not been welcoming, or all that loving, or all that helpful, and some have even been just plain homophobic, which is a sin. Longman’s discussion is done in humility and with sensitivity, and he recommends several helpful studies by S. Allberry, E. Shaw, W. Hill and others which I have not read.

There are reflection and study questions at the end of each chapter, and a helpful bibliography at the end. This book is lay-friendly, and written in good clear prose. It is not a technical study, but it presupposes such study and as such is the best book on these four major OT controversies I know of and can commend. As Tremper would say— the God of the OT is not someone different from the God of the NT, and it’s time for us to abandon whatever Marcionite tendencies we might harbor when studying even the most difficult of Biblical topics.