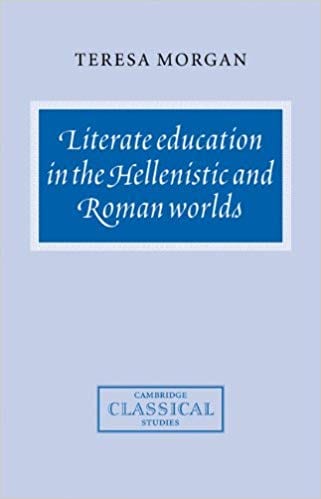 One of the most helpful classics studies that I have read recently is Tessa Morgan’s erudite study of ancient education (384 pages, paperback reprint in 2007). I’ve seldom read a doctoral thesis this learned and skilled in its execution. It comes out of her doctoral work at Cambridge, which has one of the finest classics departments in the whole world, and it is simply loaded with useful primary source material and analysis of various sorts, particularly of the educational papyri that came from Egypt and of Quintilian, whose textbook on rhetoric became the gold standard of analysis of the art of persuasion, or ‘of speaking well and eloquently’.

This is not to say there are not shortcomings with this richly detailed study. For one thing it relies too much on the papyri from only one Roman province, and does not do enough to compare that datum with other sorts of datum from elsewhere in the Empire. For instance, graffiti, inscriptions on various sorts, not to mention literary evidence. And it entirely neglects to analysis the material in the NT which suggests the broad influence of rhetoric on various of those writers of the NT documents, none of whom, with the possible exception of Paul, could have even remotely been consider part of the elite of society (Morgan thinks only the elite got rhetorical education proper). Were I to have a discussion with Prof. Morgan, I would remind her that absence of evidence is not the same thing as evidence of absence, so what the papyri tell us, most of which come from the south of Egypt and not even from it’s major intellectual center, Alexandria, must be evaluated with extreme caution.

The book has seven main chapters plus a long introduction setting the scene and contexts of ancient education, followed by chapters of elementary education, the use of literature (chiefly Homer in the east, Virgil in the West) in such education, including the use of maxims, or as we would call them soundbytes or ethical one liners, which in turn is followed by an examination of the further education which involved training in grammar, and finally, the training in rhetoric proper. It is indeed odd, that more attention is not given to the progymnasmata itself, the sort of elementary level guide to education, particularly rhetorical education, and yet we have clear evidence of the use of this tool even at the elementary level of education, once one has learned how to read and then write. The final main chapter of the book analyzes the social impact of such an educational system, mainly set up for the elite, and mainly meant to proper up the hierarchial status quo. There is in addition some excellent charts of various sorts, including the evidence we have of which authors were regularly part of the training of children– again chiefly Homer, Euripides and perhaps Menander, and then in the West Virgil and Cicero (and perhaps some Seneca or Epictetus when it comes to maxims). In my second post, I will delineate some of the real key gains and insights from the study.
Previous Post

Where Is God in This Pandemic?
Roger E. Olson
Books by This Author Books by Ben Witherington

Evangelical
Professor's Yuan's Testimony about his Homosexuality
The Bible and Culture

Evangelical
Why Would a NT Scholar Resort to Writing...
The Bible and Culture