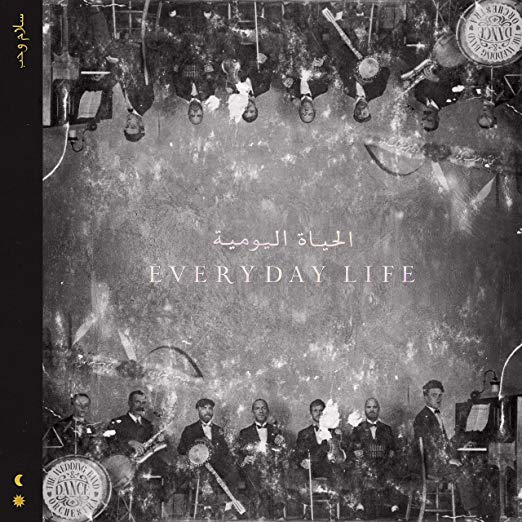 Chris Martin has gone through a lot in the last twenty years. He married Gwen Paltrow, had two kids, then got divorced. Then found Dakota Johnson. His ups and downs have certainly affected his music, as his recent double lp– Everyday Life shows. What you may not know is that Chris grew up in Devon in a Christian household, and went to church. Along the way after he went to boarding school, as the recent excellent article in Rolling Stone reveals, he got confused about his faith, his sexuality, and a few other things. Teenage years can do that to a person. Today Chris calls himself an omni-theist. What is interesting is that the way he expresses that on his latest album is to return in some measure to his roots— after the searingly beautiful instrumental opening called Sunrise, we have a song about Church and going to Church. This is followed by several protest songs of sorts— one on police abuse of immigrants, one on guns. But unexpectedly we also get a traditional styled, but new, Gospel song praying God will shine his light on him. And that is not all. There is a full choir song on the second lp about having his darkness illuminated, and then the song Everyday Life which sounds for all the world like a Hillsong tune that ends triumphantly with Alleluias.

This album can be fruitfully compared to Paul Simon’s last great album– So Beautiful or So What. I suggested in my review of that one some years ago, that Paul, unknowingly, was channeling the Holy Spirit, and he actually responded to my review taking note of what I said. In this Coldplay album the echoes are even more clear and direct. One hopes that Chris will indeed once more embrace the One who has inspired this album. Like other Coldplay albums it still has those anthemic stadium type songs, like Church, but there is so much more here. This is the album of a more mature musician trying to come to grips with the fact that the voice of the Almighty is whispering in his ear. Let’s hope he keeps listening.
Previous Post

February 5, 2020
The Work of an Edinburgh Street Artist
Next Post