Should We Be Protesting Stay at Home Orders? 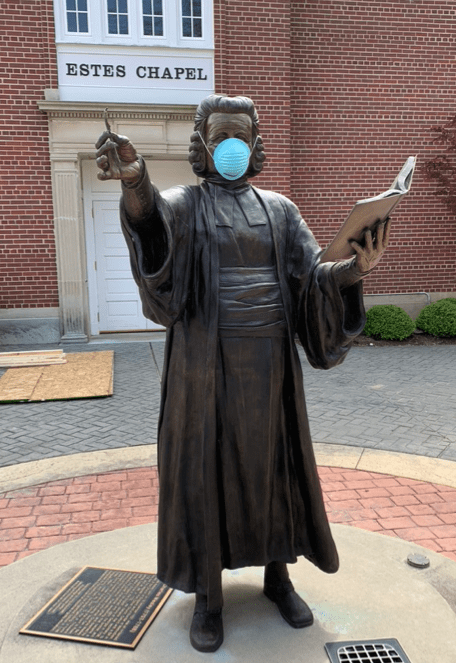 Charles Wesley fighting the corona virus while writing another lyric for a hymn.

Egged on by certain high ranking officials, various frustrated Americans have taken to the streets (and largely ignored rules about social distancing) to demand that the country’s businesses open back up so we can all sing ‘God bless our standard of living’ one more time. There are numerous problems with this whole approach, and my concern in this post is that many of these oblivious people are devout Christians who should know better, since they are supposed to be loving their neighbors as themselves.

The first problem with this whole approach is that since the corona virus has already killed over 40,000 Americans, and infected over 800,000 Americans, even by conservative statistical counts, and since we HAVE NO VACCINE YET AGAINST THIS KILLING VIRUS THAT PREYS ON THE MOST VULNERABLE IN OUR SOCIETY (the elderly, those with pre-existing conditions, the obese, the cigarette smokers and I could go on), we have no business at all going out and demanding the country reopen BEFORE we have done extensive testing of who is and who isn’t carrying this disease. For example, today we learned that someone died in California in early February before any serious sheltering in place orders were given, but no one knew the cause or that the virus was already spreading back then. Ignorance, in this case, is not bliss. It is dangerous. It is not safe to either stay ignorant nor ignore the warnings of Drs. Fauci and Birx and others just because you are currently not working. Pay attention to what the CDC is saying every day about these things! Pay attention to your governor. Pay attention to the guideline about a state waiting for 14 straight days of decline in new cases, before beginning to open up anything non-essential.

As Christian persons, there is no excuse for narcissism either. As far as I can see, there is nothing in the constitution that says ‘thou hast an inalienable right to work’. And what’s even more maddening is that the very same persons who are out protesting abortion while protesting stay at home orders, the so-called right to lifers, don’t realize the blatant contradiction involved in what they are doing. The elderly, the infirm, the people with pre-existing conditions, the poor, the homeless, they also have a right to live, and here’s how our priorities must be as Christians—

SOMEONE’S RIGHT TO LIVE, TAKES PRECEDENT ALWAYS OVER SOMEONE ELSE’S SO-CALLED RIGHT TO WORK. Otherwise, you are simply violating part of the great commandment— to love your neighbor as yourself. And as for right wing political groups that claim to be Christ-centered and Biblically-based, SHAME ON YOU FOR URGING PEOPLE TO VIOLATE THE GREAT COMMANDMENT, and ignore the vulnerability of your neighbor. This is not at all what Jesus would do.

I do understand and empathize with those who are out of work now. Fortunately the government has done and is doing something to help the unemployed with stimulus checks and unemployment checks and the Payment Protection Plan. These temporary remedies are not enough, but they do help as does the further small business loans being rolled out today.

It would be my hope that this pandemic would cause a drastic re-evaluation of the pay of essential workers, including farmers, grocery store workers, health care workers etc. Perhaps, now is the time to completely re-evaluate our values and way of living. Some long time ago Ayn Rand wrote a book about ‘the Virtue of Selfishness’, a book about putting yourself first over all others. Well, from a Christian point of view, that is no virtue at all. As Jesus once said ‘greater love has no one than those who lay down their lives for others’. That’s, for example, our health care workers. The opposite of this behavior is demanding the nation re-open before widespread testing…. That frankly is like spitting into a prevailing wind and hoping it doesn’t come back and slap you in the face. Enough said.