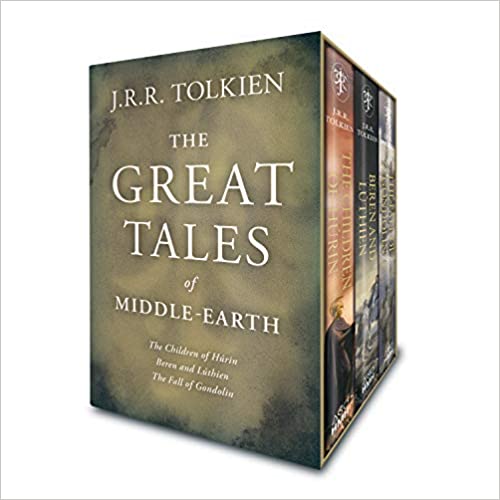 Two of the three Great Tales in the boxed set, did not appear in their current form until 2017. The second of these is a great romance involving Beren, a human being, and Luthien an elfin maiden. The story is one part Romeo and Juliet, one part quest for the Simaril, and one part battles to stay alive and be together despite opposition. Beren, in order to have Luthien as his wife, is given the near impossible task of going to the dark realm of Morgoth and bringing back to the elf king one or more of the Silmarils— the precious stones in Morgoth’s crown. But Luthien refuses to let him go on this quest alone, and as the story unfolds there is a giant hound Huan who befriends them, there is a devilish prince of cat named Tevildo who serves Morgoth, and much more. Tolkien, as I said in the previous post, was a tinkerer, and there are many iterations of this story, both in prose, and in rhyming couplets in the form of an epic poem. As it turns out, Tolkien was as adept at epic poetry as at prose. While this story forms a goodly part of the Silmarillion, it is not fully told there, and so we are fortunate that Christopher gathered up all the shards of manuscripts and assembled the various forms of this love story. The story was not finished in the 30s because first of the great success of The Hobbit, and then in due course the even greater success of the Lord of the Rings, for the publisher, after the success of the Hobbit clamored for more Hobbit tales. In the various recensions of the story of Beren and Luthien, sometimes there is a tragic ending, sometimes a partially happier one, but I will not spoil these endings here. I will simply say, read the long prose excerpts first, and then enjoy the remarkable epic poetic version of the tale. Here, below just for comparison is the official statement about this book found on Amazon:

“The tale of Beren and Lúthien was, or became, an essential element in the evolution of The Silmarillion, the myths and legends of the First Age of the World conceived by J.R.R. Tolkien. Returning from France and the battle of the Somme at the end of 1916, he wrote the tale in the following year. Essential to the story, and never changed, is the fate that shadowed the love of Beren and Lúthien: for Beren was a mortal man, but Lúthien was an immortal Elf. Her father, a great Elvish lord, in deep opposition to Beren, imposed on him an impossible task that he must perform before he might wed Lúthien. This is the kernel of the legend and it leads to the supremely heroic attempt of Beren and Lúthien together to rob the greatest of all evil beings, Melkor, called Morgoth, the Black Enemy, of a Silmaril.

In this book Christopher Tolkien has attempted to extract the story of Beren and Lúthien from the comprehensive work in which it was embedded, but that story was itself changing as it developed new associations within the larger history. To show something of the process whereby this legend of Middle-earth evolved over the years, he has told the story in his father’s own words by giving, first its original form and then passages in prose and verse from later texts that illustrate the narrative as it changed.”

May 21, 2020
Helen Bond's The First Biography of Jesus-- Part Seven
Next Post

May 23, 2020 Jeff Foxworthy at Liberty University
Browse Our Archives
Follow Us!

Looters and Rioters Don’t Care About...
The Chorus In The Chaos
Books by This Author Books by Ben Witherington

Evangelical
43 Years... and Counting (but who's counting???)
The Bible and Culture