A Cautionary Tale— The Gospel of Jesus’ Wife Hoax

Alert Reader Professor Phil Jenkins sent this Wall Street Journal Review along to me. It should remind us all that deep desire for something to be true, does not make it true. One has to do scholarship on the basis of facts and solid evidence, and there is always a need for peer review by competent critical scholars in one’s field, not merely by friends or relatives.

‘Veritas’ Review: Crimson Faces
A real-life Harvard melodrama, featuring a feminist scholar, a con man and a papyrus purporting to be the Gospel of Jesus’ Wife.

Karen L. King, Hollis Professor of Divinity at Harvard, in her office with a papyrus fragment purporting to be the Gospel of Jesus’ Wife.
Photo: Bill Greene/The Boston Globe via Getty Images

‘Hotwife’ Pornographer Gulls Harvard Prof With ‘Wife of Jesus’ Hoax.” The headlines could have been worse for Karen King, the Hollis Professor of Divinity at Harvard University. But not much worse.

The first line of act I of “Veritas,” Ariel Sabar’s mesmerizing five-act real-life melodrama, is “Dr. Karen Leigh King had reached the summit of her field as a dazzling interpreter of condemned scripture.” We join Ms. King at the apex of her career, her September 2012 unveiling of the “Gospel of Jesus’ Wife” at the International Congress of Coptic Studies, held a stone’s throw from the Vatican in Rome. Speaking to three dozen colleagues, Ms. King describes the tiny papyrus fragment that had come into her possession, lingering over its fateful line 4: “Jesus said to them, ‘My wife . . .’ ”

This little snippet, Ms. King claimed, “leads us to . . . completely re-evaluate the way in which Christianity looks at sexuality and at marriage.” Ms. King considered calling the bit of papyrus the “Mary Fragment” but chose to call it a “Gospel”—“something that will stick,” she later explained. From some 30 Coptic words spread across eight discontinuous lines, Mr. Sabar writes, Ms. King had “alchemized . . . [the] case for a thoroughgoing Gospel of Jesus’s Wife.”

A married Jesus would turn the Catholic Church on its head. The papyrus hinted at a wife named Mary, presumed to be Mary Magdalene, painted as a prostitute by Pope Gregory the Great in the sixth century. The New Testament, however, never mentions a marriage, other than in references to the Church or holy Jerusalem as Christ’s spiritual bride. Christ’s purported bachelorhood undergirds the Catholic doctrine of priestly celibacy. If the papyrus accurately described a wife of Christ, “this means that the whole Catholic claim of a celibate priesthood based on Jesus’s celibacy has no historical foundation,” noted Ms. King, a feminist scholar and expert on the apocryphal, second-century Gospel of Mary. 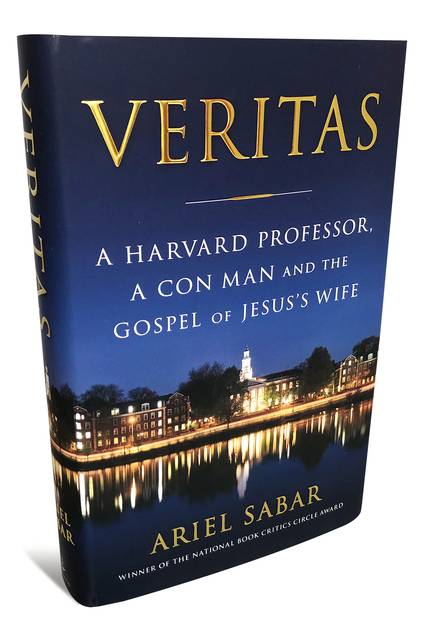 The papyrus presented problems from the start. Before the Rome event, two of the three anonymous peer reviewers retained by the Harvard Theological Review suggested Ms. King’s fragment might be a fake—although none of the scholars assembled in Rome knew that. Ms. King’s reviewers examined only a digital photograph of the “Gospel,” and “something felt off,” Mr. Sabar reports. One expert said the script “looked like twenty-first-century handwriting.” On closer inspection, small imperfections manifested themselves: missing characters and the “grammatical monstrosity” of an impossible double conjugation.

Brown University Egyptologist Leo Depuydt called the papyrus’s grammar a “colossal double blunder,” arguing that its creator was less likely to have been “a very incompetent ancient scribe” than “a modern author who might have benefited from one more semester of Coptic.” Ms. King, who, Mr. Sabar reminds us, taught Coptic at Harvard, “had somehow failed to spot most of the text’s grammatical irregularities.”

The besieged Ms. King fought back. Nineteen months after the Rome reveal, the Theological Review published her article defending the fragment’s authenticity, backstopped by testing carried out at Harvard, Columbia and MIT. Harvard issued a triumphant press release: “Testing Indicates ‘Gospel of Jesus’s Wife’ Papyrus Fragment to Be Ancient.” Ms. King and the as-yet-unidentified owner of the fragment exchanged a sigh of relief. The lab tests, he emailed her, served as “the ultimate confirmation for me that we’ve been right all along, confirming again what has been obvious from day one.”

Good news! But the book is only one-third over. Mr. Sabar is toying with us. He has our attention, and slowly, remorselessly, he pays out the rest of his devilish yarn.

Mr. Sabar doesn’t name the purported papyrus pusher until page 162, and the man’s bona fides seem quite unusual indeed. A former student in Egyptology at Berlin’s Free University, Walter Fritz briefly directed the Stasi Museum, housed in the former headquarters of the notorious East German secret police, before moving to Florida, becoming a pornographer, and carving out a name for himself and his wife in the state’s “vibrant swingers’ community.” Mr. Fritz is the proverbial man of many parts; one wonders why a prodigious researcher like Ms. King didn’t perform a few more Google searches or place some phone calls before dynamiting 2,000 years of patriarchal tradition on the basis of his sketchy offering.

As the reader moves through acts III and IV, Mr. Sabar continues to tantalize us. It is curious, we learn, that Ms. King had urged the Theological Review to scotch a dissenting article by Mr. Depuydt that was printed in the 2014 issue devoted to the papyrus. It is equally curious that the Columbia and MIT “authentications” of the fragment were performed by scholars with “close personal ties” to Ms. King and to one of her key allies. The MIT man was the son of a family friend and “an expert in explosives detection.” The ink analyst from Columbia “had no experience with ancient objects.” Oops.

By the end of the book, one feels sorry for Ms. King, not so much because a con man gulled her but because, from the universe of journalists who might have covered this story, she drew Mr. Sabar. Pursuing the King-Fritz drama, he left no stone unturned. He visited Germany three times; he relentlessly canvassed Ms. King’s home town of Sheridan, Mont.; and he of course traveled to the “breeding ground of hotwifedom,” otherwise known as southwest Florida.

His conclusion is devastating: “[Ms. King’s] ideological commitments were choreographing her practice of history,” Mr. Sabar writes. “The story came first; the dates managed after. The narrative before the evidence; the news conference before the scientific analysis.”

Ms. King, who today is 66, embarked on a phased retirement, but what of Mr. Fritz, the unartful forger? Were there no legal consequences for duping Harvard and turning half of Christendom on its ear? Or has he gone on to confect new “antiquarian” delights? Inquiring minds want to know.

This lacuna in no way detracts from Mr. Sabar’s delectable melodrama. There are dozens more surprises in his five-act play than in this brief appreciation. Savor the denouement—and don’t leave at intermission.

August 23, 2020
'You'll Be Back'-- A Priestly Parody of King George's Song from Hamilton
Next Post

August 25, 2020 Joni Mitchell and James Taylor in London--- 1970
Browse Our Archives
get the latest from
The Bible and Culture
Sign up for our newsletter
POPULAR AT PATHEOS Evangelical
1

The Coming Election Chaos?
Cranach
Books by This Author Books by Ben Witherington

Evangelical
Time for a Woman in the White House?
The Bible and Culture

Evangelical
When Doctrine Divides the People of God-- Part...
The Bible and Culture
TRENDING AT PATHEOS Evangelical