One Faith: The Evangelical Consensus 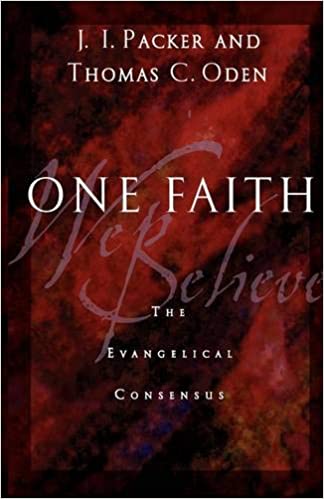 In 2020, Evangelicalism of all flavors has been receiving much unwanted attention from the media due to the segment of Evangelicals loudly touting a certain brand of right wing politics of various sorts that is anti-immigrant, anti-civil rights marches, anti-women in ministry, militantly pro gun rights, and anti-masks and social distancing, among other things. Of course, they are hardly representative of many in the broad stream of conservative Protestants ranging from peace church traditions like the Mennonites to various African American Methodist, Baptist, and Pentecostal traditions to many Evangelicals who are parts of the so-called old mainline denominations. But you would never know this from watching the news on whatever channel. Indeed, the very word Evangelical has become almost a pariah word in many circles. Into this chaos comes a breath of fresh air in the form of a book that was actually published for the first time in 2004.

Here is the Amazon summary of the books contents—-“Authors survey evangelical statements of faith produced since 1950, including the Lausanne Covenant (1974), the Manila Manifesto (1989), the Gospel of Jesus Christ: An Evangelical Celebration (1999) and The Amsterdam Declaration (2000). They show that there is a significant consensus around the central tenets of the Christian faith. Addresses the current need to clarify evangelical identity. Exposes the fallacy that evangelicalism is hopelessly fragmented. Provides the foundations for a theological unity celebrated throughout the church universal. Cites more than 75 documents of evangelicalism. Charts sixteen different theological themes. Written by two prominent evangelical statesmen representing the two main theological branches of Protestantism.”

Indeed, it is written by two of the most leading Evangelical theologians of the last 60 or more years— J.I. Packer, an irenic Calvinist and Tom Oden an irenic Wesleyan, now sadly both gone on to glory. The book is timely now, because you would never know there was a broad theological and ethical consensus among Evangelicals from what you see on television about their politics. Especially interesting in this book is the use of some of the more recent faith statements like the Manila Manifesto from 1989, or the Amsterdam Declaration from 2000 both of which get quoted copiously in this slender volume.

Since the volume is a compendium of the ‘greatest hits’ of various faith statements from seminaries, colleges, para-church organizations, and organized major conferences, it really isn’t what I had most hoped the book would be— a meaningful lengthy dialogue between Packer and Oden on Evangelical Theology. There is a brief final concluding statement by the two of them, but it only whets the appetite, and alas, there is no asking for more at this juncture. The focus in the book is on things that unify the movement, as it were, and so there is an avoidance of statements about things like who should be baptized, or whether speaking in tongues is a gift still present in the church today, or rapture theology and other such divisive topics.

Two things stand out in the book— the very strong statements about Biblical inspiration, authority and truthfulness, and the utter commitment to evangelism of a world that is inherently lost without Christ. Of course there is the expected affirmations about the Trinity, the deity of Christ, his virginal conception, atoning death, bodily resurrection ascension and final return to earth to raise the dead and judge the world. There is a very full discussion as well of the Holy Spirit, spiritual gifts, the church’s social responsibilities to the poor, environmental stewardship and much more. All of this reads like a breath of fresh compared to what we have been seeing of late on TV of Evangelicals behaving badly.

Finally, there are some odd omissions in this attempt to broadly canvas Evangelicalism. There is nothing for example from the Salvation Army faith statements which is surely one of the largest Evangelical groups in the world. Nevertheless, the book accomplishes what it sets out to do. Now we have to repair the damage done to Evangelism’s witness by some Evangelicals themselves!!

August 29, 2020 A Brief Discussion of Revelation with Dr. James Howell
Browse Our Archives
get the latest from
The Bible and Culture
Sign up for our newsletter
POPULAR AT PATHEOS Evangelical
1

Evangelical
My Resolve--- Much Needed about Now
The Bible and Culture

Evangelical
Sepia
The Bible and Culture

A Prayer for our Time-- Dr. Bill Arnold
The following is a poignant prayer offered at convocation at Asbury Seminary...
view all Evangelical blogs
Copyright 2008-2020, Patheos. All rights reserved.