There are many books about Jesus, but frankly none like this one. Think of this book as like a Rembrandt painting.  Rembrandt was a master of light and dark contrast.  For example, consider his famous Prodigal Son painting. In the center is the forgiving Father and his kneeling son. Everyone else is in shadow. 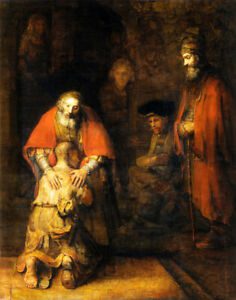 You get the picture. Ken Collins book is much the same.  He presents us with a well-written narrative that presents Jesus as the light of the world, and by contrast, the depths, the devilish darkness, of the opposition.  The opposition comes from the religious elites, but also ordinary people like folks from Nazareth. It even comes from members of Jesus’ own family.  If you were looking for a sentimental portrait of gentle Jesus meek and mild, this is not the book for you.  If you are looking for a devotional book that serves the purpose of spiritual comfort food, this book is not that either. This book is quite rightly seen as a challenge, not so much in terms of understanding its content, but rather in correcting lots of common and complacent caricatures of the historical Jesus and the social context in which he operates.  It turns out it’s not a surprise that various people wanted Jesus off the scene. In fact what is a surprise is that he managed to have about a three year itinerant ministry before he was executed.  Ken however is careful to say that not all the reception of Jesus in early Judaism was negative. Besides various disciples, there were individuals like Nicodemus, or groups of Pharisees who warned Jesus about Herod Antipas.  And there were women even in his darkest hour who were last at the cross, first at the empty tomb, and first to see the risen Jesus and proclaim he is risen.

This book is actually a quick read at about 230 pages of content, and it is divided into 42 chapters each of which are introduced with a Scripture quote.  This is followed by a litany of repentance…. so many of us do need to repent of our caricatures and misconceptions about Jesus. In a sense this book is rather like that early Christian work, the Diatessaron, which blends together narratives from all four Gospels.  The portrait of Jesus which emerges in Ken’s book is mostly Johannine and Matthean, but Mark and Matthew’s take on Jesus are not neglected or ignored.

Ken does not try to answer all the difficult historical questions these Gospels raise, but to his credit, he doesn’t shy away from various of the hard sayings and disturbing aspects of these portraits. For example he focuses on John the Baptizer calling Jesus the Lamb of God, but says nothing about the later story of John asking the question of whether Jesus is the One who is to come or should they look for another.  One could also have wished he would deal with one or another of the exorcism stories in some detail, because in our earliest Gospel, Mark, the most frequent early miracle is exorcism.  It was the latter that led to the suggestion Jesus was in league with the Devil.  We do however have a helpful account of the temptation story that begins the ministry of Jesus.  And there is a good discussion about crowd psychology and how and why a crowd can become an angry mob, when it came to Jesus.   As Ken stresses, while Jesus did come to comfort the afflicted and save sinners, he also came to confront the self-righteous and self-justifying.  And it is the latter which got him into hot water repeatedly with all sorts of people, especially some of the religious authorities. The lay person may wonder why the birth narratives about the virginal conception don’t figure more into this account, but in fact Ken is presenting a very traditional orthodox view of Jesus as both human and divine, both crucified and risen in the flesh.

Written at a level for clergy, laity, and students alike, this book deserves to be read, and read again, as it does the helpful work of teasing the mind into active thought about the most important person to ever walk the earth.

October 19, 2021 Beautiful...but Sad
Browse Our Archives
get the latest updates from
The Bible and Culture
and the Patheos
Evangelical
Channel
POPULAR AT PATHEOS Evangelical
1

Evangelical
The N.C. Furniture Industry Gets Legs Again
The Bible and Culture
TRENDING AT PATHEOS Evangelical