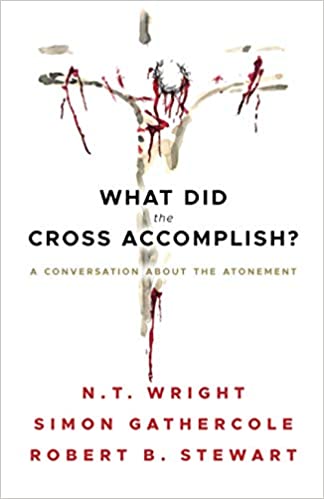 This resolution is directed at the readers of this blog more than me, since I don’t play such games and I read a ton of good books and review them.  Speaking of which, I have a good book you should read on the subject of the atoning death of Christ and it is very short!

A good place to start is with the interesting dialogue between Tom Wright and Simon Gathercole which was held at the last Greer-Heard Forum at New Orleans Baptist Seminary. There is also a helpful essay on the Lord’s Supper as a performative form of theologizing about Jesus death Robert Stewart who hosted all these interesting Forums.  The books title is What Did the Cross Accomplish. A Conversation about the Atonement, (Westminster/John Knox, 2021).   The dialogue between Wright and Gathercole is lively, but it is a great tragedy that Westminster/John Knox did not also agree to publish the lectures by Doug Moo and Edith Humphreys and others as well which were given then. This was a publishing mistake and in no way the fault of Bob Stewart who arranged the Forum itself.

Since there were no Wesleyans in on this discussion, it often takes a more Reformed slant on these issues with Simon saying things like God does all these things ultimately to glorify himself and his name (sounding rather like John Piper with a British accent) which is problematic since it is human beings that those passages are talking about glorifying God, not so much portraying God as a narcissist.  Wright makes some interesting and helpful comments on initial and final justification, but seems to not realize that initial justification is about forgiveness of a person for sins committed, and final justification involves a judgment on the works of even Christians who must appear before the bema seat judgment of Christ to give an account of the deeds done in their lives.  1 Cor. 3 suggests that even a negative judgment on the works of ministers could still leave them saved, but as through fire.  Both Wright and Gathercole are clear about the substitutionary notion involved in the death of Christ, but also that God is not punishing Jesus for his own sins, but as 2 Cor. 5 says ‘he was made sin….so we might be made righteous(ness)’.   At one point Gathercole stresses that the Mosaic Law was for Jews, and Jews did not assume that Gentiles were under it.  This makes problematic the statements of Paul about the law of God being written on Gentile hearts in Rom. 2, not to mention the statement in Rom. 8.1ff. that humanity in general has been set free from the ruling principle of sin and death, by the ruling principle of the Spirit, which includes that Christ is the end of the Mosaic Law as a means of righteousness as Rom. 10 goes on to say, a passage (Rom. 9-11) in which Paul is particularly addressing Gentiles.

Another big plus about this slender volume (less than 100 pages) is it has an excellent bibliography about the treatment of atonement in church history and in the present (thanks to Bob for helpful annotations of the entries).  I heartily recommend this little book as a good conversation starter about atonement.  Thereafter, reading William Lane Craig’s major recent study on Atonement entitled Atonement and the Death of Christ  (Baylor U. Press, 2020–see the review and dialogue on my blog in 2020) will up the ante in your familiarity with the discussion from a philosophical point of view.

January 2, 2022 Jesus the Inquisitor Supreme
Browse Our Archives
get the latest updates from
The Bible and Culture
and the Patheos
Evangelical
Channel
POPULAR AT PATHEOS Evangelical
1

On Not Throwing the Baby Out...
Roger E. Olson
Books by This Author Books by Ben Witherington