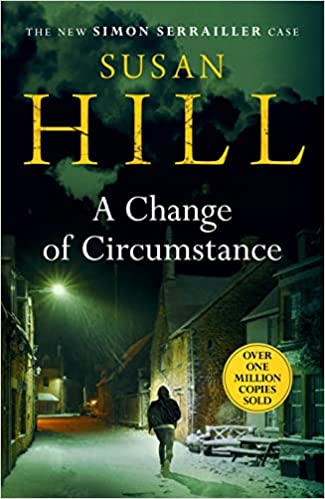 Susan Hill’s Simon Serrailler  series keeps rolling along, and in opinion this is the best one so far.  The focus continues to be on the dynamic duo of brother and sister, the latter being Dr. Cat Deerborn, and their extended family.  This novel focuses on the burgeoning drug problem in England, and how well organized drug rings have become, even to the point of the sickening practice of recruiting and entrapping mere children nine years old and  up to do the delivering of the drugs, the so called ‘county lines’ system of distribution.  Here’s a nice summary/teaser from the Barnes and Nobles website—- “In A Change of Circumstance, the eleventh book in Susan Hill’s acclaimed crime series featuring the enigmatic detective Simon Serrailler, Hill yet again raises the stakes.

Detective Chief Superintendent Simon Serrailler has long regarded drug ops in Lafferton as a waste of time. The small-time dealers picked up outside the local high school can’t or won’t turn in any valuable names, so they’re merely given a fine and the trail runs cold. But when the body of a twenty-two-year-old is found in neighboring Starley, the case pulls DCS Simon Serrailler into the underbelly of an elaborate drug operation that moves narcotics from the cities into the suburbs and right down to villages. The foot soldiers? Vulnerable local kids like Brookie and Olivia, whose involvement gives Simon a bitter taste of this new landscape. It’s a harsh winter in Lafferton, and with struggles both at home and on the job, DCS Serrailler soon learns that even the familiar can hold shocking surprises . . .Dark, page-turning, and rich in mood and character, Susan Hill’s A Change of Circumstance lands brilliantly as another gripping entry to the Serrailler canon, sure to enthrall fans and newcomers alike.”

Several things about these Susan Hill novels make them stand out: 1) the focus on family with all its strengths and weaknesses, including the interactions between parents, children, and in the case of Richard Serrailler grandchildren; 2) detailed looks at the inner workings of a local police force in small town England; 3) the difficulties of sustaining a romance, much less a marriage when one is working 24/7 in a stressful job like being a police detective or an on call doctor; 4) how a society is held together by certain shared moral values affirmed by the majority of the community, including some rather specific Christian values.

Hill’s style is quite direct, and in some ways is very much like that of Grisham— the interwoven stories carry the freight, not elaborate descriptions of settings, etc. These novels do not depend on ambience built up by elaborate use of adjectives and adverbs. It is however true, as has been pointed out to me by my friend Richard Bauckham that she has a fine ear for the nuances of different sorts of speech patterns from different classes of people. It helps fill out the character, and distinguish the more well educated from those less so, as well as distinguishing the lingo of the younger from the older characters.  Of course, you need to know a certain amount of English English to decipher some things (the boot is the trunk, the bonnet, the hood of the car, or misper is short for missing person etc.).

For me, this is the best of the series so far, and despite their flaws, I really like the central characters in these novels. They seem quite real and believable to me.  I recommend this series without reservation, especially if you are an Anglophile like me.

January 9, 2022
Podcast on Voices and Views on Paul
Next Post

January 10, 2022 It's Not Too Late--- Join Us for the Genesis to Revelation Tour of Israel, Egypt, Turkey
Browse Our Archives
get the latest updates from
The Bible and Culture
and the Patheos
Evangelical
Channel
POPULAR AT PATHEOS Evangelical
1