Atheism on Trial— by Mark Lanier 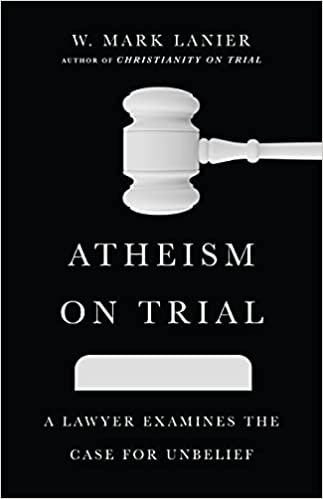 Mark Lanier is a remarkable person on numerous counts. He is both a devout Christian and a world-class lawyer.  One wonders how he feels about what Jesus said about lawyers.  All kidding aside, Mark writes as well as he argues in court, with the same wit and wisdom that also shows up when he teaches an enormous Sunday school in a Baptist Church in the Houston area.  Not only so, he has set up a remarkable study center, which has at its heart a huge theological library, the Lanier Collection. I’ve not only been there, when I got there, they asked me to sign a huge pile of my own books for their collection. That took a while.

Atheism on Trial (March release, IVP, about 200 pages) is in a sense a sequel to Christianity on Trial and in various ways it is Mark’s most important book, thus far.   The burden of Mark’s argument is that arguments that ‘there is no God’ do not best explain a whole host of things that are part of reality.  For instance, why are human beings so hard-wired to demand justice and fairness in all areas of life, if there is no moral arc to the universe, as MLK once called it.  If there is no absolute right and wrong, why exactly would racism be absolutely wrong, or for that matter molesting a child, or for that matter cannibalism?  If human beings are just stardust, or a bag of chemicals, and frankly the cry for justice cannot be said to be a result of evolution or survival of the fittest, isn’t the best explanation that there is a righteous God who created us in his image such that we too have been hard-wired to care about absolute right and wrong on many fronts.  I would say yes.

Mark spends a fair bit of his time debunking the rather flimsy arguments numerous atheists like Dawkins, Hitchens, and Harris have trotted out numerous times, for example ‘since you can’t prove there is a God, therefore there must not be a God’.  Mark not only rightly asks what counts as proof ( and he is right that proof in a scientific lab sense is one thing, proof based on historical evidence or proof in a courtroom is another), he points out that atheists if they were really arguing properly would have to prove the negative, not merely cast doubts on the positive arguments for God’s existence.  Exactly right. And the real issue here is which set of arguments best explains reality as we have.

Mark does not dodge the big issues in this book, like for example, what about suffering and evil in the world?  If there is a Biblical shaped God in this world why is their suffering and evil.  Mark’s answer is severalfold— 1) God has created human beings and angels with a measure of freedom of choice, and God has created a world of cause and effect, including moral cause and effect. Most of the evil in this world and suffering can be laid at the door of human beings behaving badly, In addition, the result of human sin is we live in a fallen world. Even the creation has been subject to the futility of fallenness; 2) God is unchanging and the fact that he is the most powerful person and force in the universe doesn’t mean he’s the only one with power in the game of life.  God’s almightyness doesn’t mean there are not various things he cannot do— for example he cannot lie, he cannot be tempted, he cannot, in his divine nature, sin, he cannot change his own righteous, holy, and loving character, and so on. Human beings are capable of doing wicked things that God cannot do since his character is unchanging and he remains faithful to who he is and what he says.  There is more, but you get the flavor of the argument.

There are chapters on whether there is well-grounded meaning and significance to human life if there is no absolute truth, no God etc.  Lanier argues that the logic of arguing ‘there is meaning in life just because there is’ frankly is not a logical argument. But if there is a God, a God who has endowed us with purpose and our lives actually matter and have significance, well then we don’t need to keep singing Bette Midler’s song ‘Is That All There is? If That’s All there is, then let’s keep dancing’.

Lanier’s chapter on Science is well worth reading and he is right— science and faith are not antipodes. They need not be at odds with one another. Go read Francis Collins’ The Language of God.  Science is a tool to help humankind, and by the way many of the greatest scientists then and now are devout Jews and Christians.  Perhaps less satisfying is the final chapter on Evolution, though Lanier is right that equally devout Christians can take different views on how to interpret Genesis 1-2, vis a vis the issue of evolution.

Mark Lanier is not afraid to take on the tough issues, and indeed to show the illogic of arguments for atheism and agnosticism.  This book is however written in a way that most anyone can grasp his case, and overall it’s a very strong case.  Lanier is well read in all the atheist literature, both the more technical and the more popular literature, and he does not shy away from the tough questions. You will have to evaluate his arguments for yourself, but as for me, I think this is the best book of its sort to deal with atheism and agnosticism and it should be in every pastor’s and educated lay person’s library.

February 16, 2022 Atheism on Trial--- Part Two
Browse Our Archives
Related posts from The Bible and Culture