Last night, and after they had already done some 30 cities on their way to 50, we got to see Toto open for Journey, though it could easily have gone the other way around, since both are headliner bands.  The concert lasted a good 3 hours even with a quick equipment change after Toto finished.  And Cinci was ready to rock for sure.  The venue crew said they had set up for 12,000 and I believe it.  The arena was full and echoing, and my right ear is still ringing the next morning.  Journey played the longest and had the better light show backing them as the pictures will attest, but Mssrs.  Lukather and Williams and co. were in excellent form (except for the guitar melt down on their first song prompting a change of guitars).   I do not understand what sort of stamina it takes to do a 50 city tour of the U.S. but it has to be considerable.  Especially on back to back nights. For example, our show was Sunday night, then Atlanta and Nashville on the next two nights, then back to Columbus Oh. by the weekend. Wow.

Toto did various favorites (obviously finishing with Rosanna and Africa). So we got early songs like Hold the Line and Georgy Porgy, one song off their most recent CD,  Home of the Brave,  several great ballads by Luke.  The set lasted about 50 minutes.  Joseph Williams did a killer rendition of White Sister, as did Luke on I Won’t Hold you Back Now.   We all would have liked more, but this was quite good. One of the noticeable things in comparing lead guitar play by Luke and then by Neil Schon of Journey is how much better a guitar player Luke.  His runs go somewhere and fit into the melody line.  Neil just plays endless notes for the most part, without a lot of purpose and direction, though with a few exceptions.

As for Journey we had seen them a decade ago in Louisville and they are still just as good. Arnel Pineda has still got a fabulous voice, and they played many of their hits, and a couple of off tracks from the Escape lp, which I didn’t really know. But you can’t go wrong with Lights, Faithfully, Anyway You Want It, and so on.  They played for about an hour and a half and a good time was had by all.   Here are some shots…   Those in the picture are my sis Laura, my wife Ann, and my buddy the Tune Dude from Wilmore…. Jeff James (of James gang fame– not the rock group). 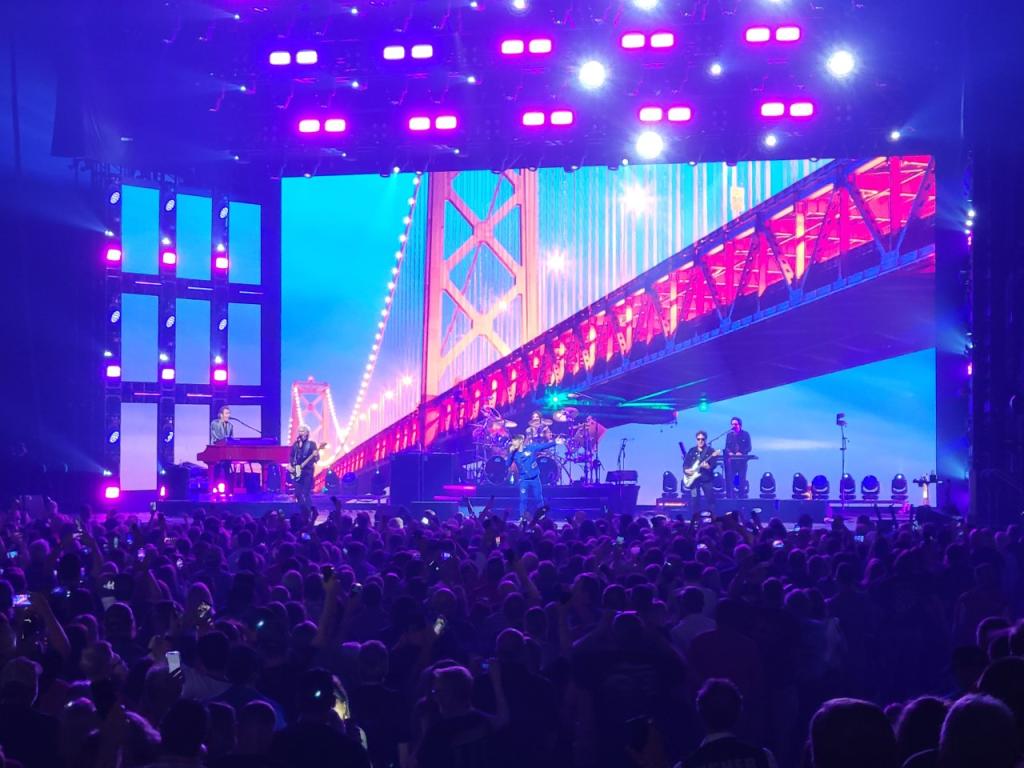 April 26, 2022 Have You Reached the Breaking Point?
Browse Our Archives
Related posts from The Bible and Culture

Looking to the Middle East for positive news
Tomorrow I'm headed to Lebanon and Jordan for a couple of weeks....
view all Evangelical blogs
Copyright 2008-2021, Patheos. All rights reserved.
Close Ad