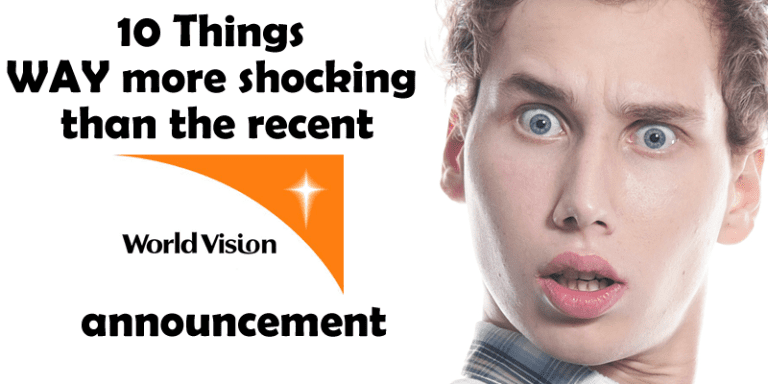 UPDATE: Apparently World Vision has reversed their decision. I have made a few edit’s below to reflect that change. Edits in bold!

It turns out World Vision has reversed their position allowing Married Gay people to join their staff. This apparently is shocking to some people. This was far from shocking for me,  Some people have been shocked by this reversal. I thought if the NEW World Vision announcement is shocking, how much more shocking must these few simple facts be:

Edit: This post is NOT ABOUT HOMOSEXUALITY but instead it’s about how fed up I am with how passionate people on both sides get about it when there are so many issues that impact so many more people that they don’t say anything about.

March 28, 2014 Noah's Remarkably Faithful Adaptation of the Bible
Recent Comments
0 | Leave a Comment
"I will only note that in footnote 98, you misattributed the article I wrote. It ..."
Thomas A. Szyszkiewicz Amy Coney Barrett, Stephen B. Clark ..."
"The day of my birthday, May 1st, is also a feast day of St. Joseph. ..."
American Patriot Saint Joseph – Actions that Speak ..."
"This is so true! I reread the Practice of the Presence of God last year ..."
Kathy Sullivan St. David Of Wales – The ..."
"One of my favorite saints"
Ame Angela Merici – Humble, Simple, Practical ..."
Browse Our Archives
get the latest updates from
The Orant
and the Patheos
Catholic
Channel
POPULAR AT PATHEOS Catholic
1